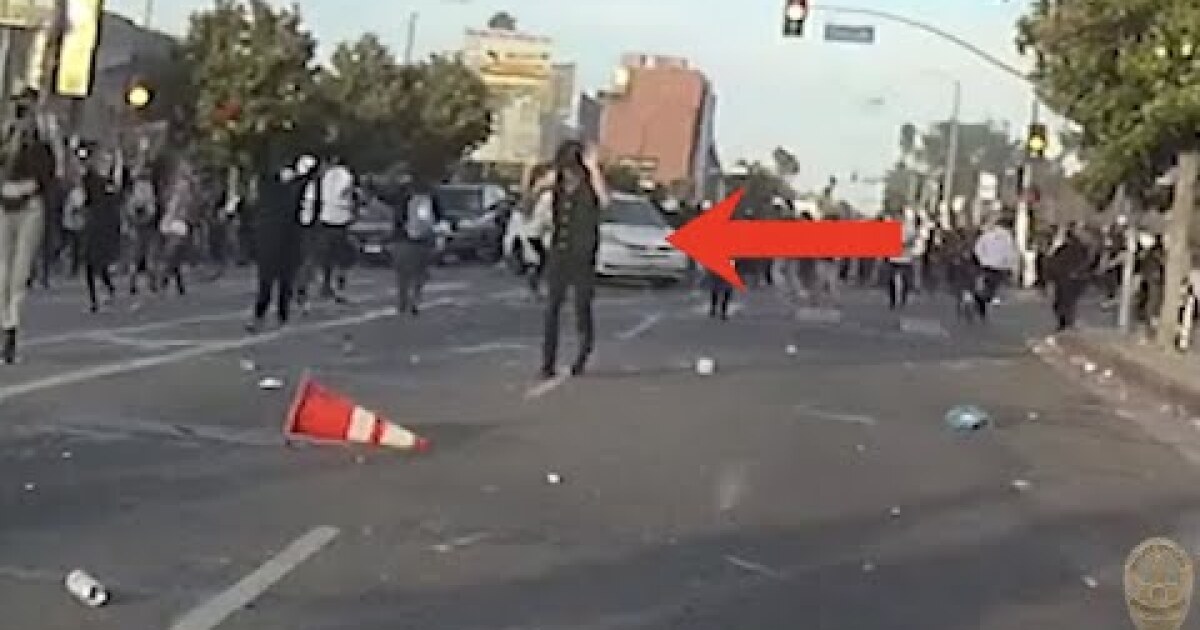 Footage from a Los Angeles police officer’s body camera shows a man with his hands up being shot in the head with a tactical round as officers advanced on a crowd of fleeing protesters in late May.

The man, CJ Montano, was standing in the middle of a street in the Wilshire area after taking several steps backward as officers on skirmish lines in front of him screamed “Less lethal!” and “Leave the area!” As the officers began firing at the protesters as they fled, Montano can be seen dropping to the ground, then being rushed away from the scene by other protesters.

Montano, who could not immediately be reached for comment Friday, was later hospitalized. His shooting is now under investigation by the LAPD’s Force Investigation Division.

In a video including the body-camera footage that was produced and released by the LAPD on Friday, Capt. Gisselle Espinoza, an LAPD spokeswoman, said, “the circumstances of how Montano was struck, and which officer fired the less-lethal projectile that struck Montano, is still under investigation” as an “unintentional head strike.”

The department would not comment as to why the shooting had already been deemed “unintentional,” because of the ongoing nature of the investigation. However, a source familiar with the investigation said the classification of the shooting as “unintentional” was based on interviews with the two officers who the department identified as having fired their weapons at the time.

Police said they have tried to interview Montano, without success.

A Times investigation has found LAPD officers likely violated protocols for the use of batons and tactical weapons during the protests that day in the Fairfax Division. Many protesters were injured, including by the sponge and foam bullets and beanbag rounds that officers fired.

The LAPD is investigating 125 separate complaints from the protests, including 54 involving officers using force, police said. A total of 10 officers have been removed from field duties pending investigations.

Asst. Chief Robert Arcos, who oversees LAPD operations, has previously said that officers that day were firing at specific targets and not simply to disperse or push back crowds. Department policy requires such weapons be used only on individuals who are targeted for presenting a clear and immediate threat. It requires that officers aim for the person’s navel or belt line, then their arms and legs, and never their head or neck.

Officers are not supposed to fire the weapons at people who are fleeing an area.