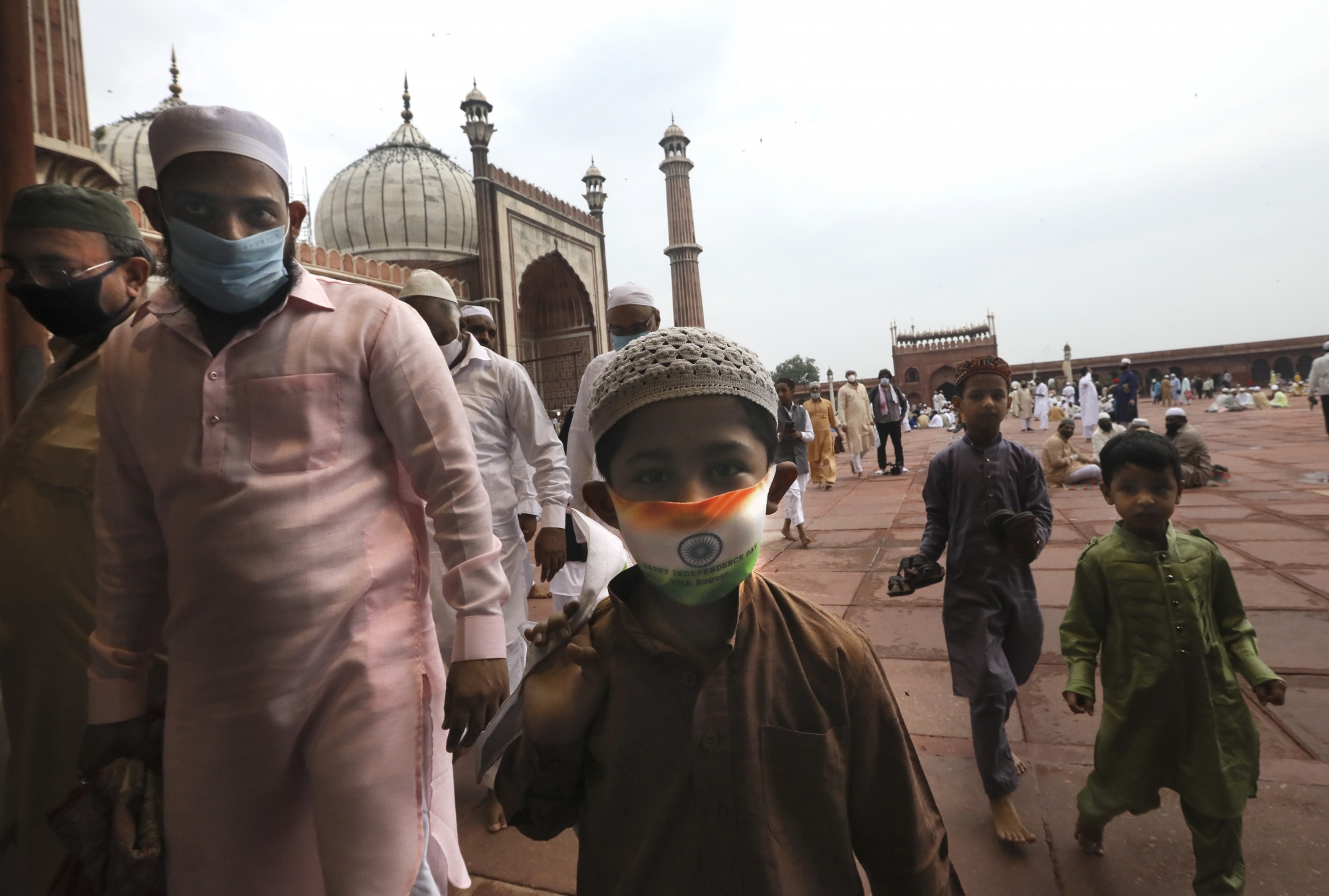 Tokyo Gov. Yuriko Koike issued a warning Saturday in an online video, urging people to wash their hands, wear masks and visit those businesses that display the special city-backed stickers with the image of a rainbow, which indicates good social distancing.

Most people getting sick were in their 20s and 30s, highlighting how they may be putting their guard down and going out partying, according to officials.

Nationwide, the daily count of coronavirus cases in Japan totaled a record 1,579 on Friday.

— Fauci confident virus vaccine will get to Americans in 2021

— The first wave of college students returning to their dorms aren’t finding the typical mobs of students and parents. What many of them found were strict safety protocols and heightened anxiety amid a pandemic where virus infections are growing in more than two dozen states.

— Small groups of pilgrims have performed one of the final rites of the Islamic hajj as Muslims worldwide mark the start of the holiday of Eid al-Adha amid a global pandemic that has impacted nearly every aspect of this year’s pilgrimage and celebrations.

— A third person has died of coronavirus complications in Vietnam, a day after it recorded its first-ever death as it struggles with a renewed outbreak after 99 days with no local cases.

India recorded the steepest spike of 57,118 new cases in the past 24 hours, taking its coronavirus caseload close to 1.7 million, with July alone accounting for nearly 1.1 million infections.

The Health Ministry on Saturday also reported 764 additional deaths for a total of 36,511.

India’s Civil Aviation Ministry delayed resumption of international flights by another month until Aug. 31. But it will continue to allow several international carriers from the United States, Europe and the Middle East to operate special flights to evacuate stranded nationals.

Health Minister Harsh Vardhan said Friday that India achieved more than 1 million recoveries with active cases only one-third of the total. India is now conducting more than 640,000 tests in 24 hours, taking cumulative tests across the country to nearly 1.9 million, he said.

SEOUL, South Korea — South Korean prosecutors have arrested the elderly leader of a secretive religious sect as part of an investigation into allegations the church hampered the government’s anti-corfonavirus response after thousands of worshipers were infected in February and March.

Prosecutors are questioning 88-year-old Lee Man-hee over charges that the Shincheonji Church of Jesus hid some members and underreported gatherings to avoid broader quarantines.

More than 5,200 of the South Korea’s 14,336 confirmed virus cases have been linked to the church.

South Korea’s Centers for Disease Control and Prevention on Saturday reported 31 more confirmed cases of COVID-19. At least 23 of the cases were tied to international arrivals.

MEXICO CITY — Mexico has become the country with the third most COVID-19 deaths in the world, behind the United States and Brazil.

Mexican health officials said Friday there were 688 deaths for the latest 24-hour reporting period, pushing the country’s total to 46,688. That put Mexico just ahead of the United Kingdom, which has 46,119, according to the tally by Johns Hopkins University. Mexico’s population is double that of Britain.

The health officials also said Mexico now has had more than 424,000 confirmed coronavirus cases during the pandemic.

Also on Friday, nine state governors from opposition parties criticized what they call the federal government’s “confusing messages” on measures to curb the spread of the coronavirus.

BEIJING — China is reporting a more than 50% drop in newly confirmed coronavirus cases in a possible sign that its latest major outbreak in the northwestern region of Xinjiang may have run its course.

Officials on Saturday there were 45 new cases over the previous 24 hours, with 31 of them in Xinjiang, where the outbreak has been focused on the regional capital and largest city of Urumqi. That is down from 127 cases nationally and 112 in Xinjiang reported Friday.

In China’s semi-autonomous city of Hong Kong, infections continue to surge, with more than 100 new cases reported Saturday. That put its total at 2,273 for the pandemic. Two deaths also were reported, giving the city a total of 27.

CARACAS, Venezuela — Venezuela’s president has unveiled hundreds of hospital beds set up inside a sports dome in the capital of Caracas as his government prepares for a possible wave of coronavirus infections.

President Nicolás Maduro went on state TV to show off the converted complex Friday as he urged Venezuelans to stop throwing parties and wash their hands to prevent the virus’ spread.

Inside, the dome’s floor is walled off with beds. Outside, dozens of tents in the parking lot hold even more. A Cuban medical team presented their nation’s flag, saying they are ready.

CAIRO — The internationally recognized Libyan government based in Tripoli has reinstated a total lockdown for at least five days to curb the growing coronavirus outbreak in the war-torn country.

The tight restrictions imposed Friday dampened the festive spirit of the Eid-al-Adha holiday, when Muslims gather to pray and slaughter livestock and distribute the meat to the poor.

With Libya’s health system and infrastructure devastated by nine years of conflict, the U.N.-supported government ordered people in western Libya to stay inside unless they have to purchase essentials.

Libya is divided between rival administrations in the west and east. It has reported 3,621 confirmed coronavirus infections and 74 fatalities due to COVID-19, but testing nationwide remains extremely limited.

MONTGOMERY, Ala. — Alabama state officials say a program to aid families with students who are limited to remote learning this fall because of the coronavirus pandemic will provide $100 million for increased internet service.

While some students were able to participate in classes online after schools closed in the spring because of the pandemic, many were unable to take part because of the lack of reliable high-speed internet.

MIAMI — Hurricane Isaias’ imminent arrival is forcing the closure of some outdoor coronavirus testing sites Friday even as the state reached a new daily high in deaths.

Meanwhile, the virus was complicating efforts to put contingency plans in place for evacuations and shelters if the storm makes them necessary. Florida Gov. Ron DeSantis issued Friday an order declaring a state of emergency in eastern coastal counties from the Florida Keys to Jacksonville, but no evacuations had been ordered or shelters opened.

The coming weather forced officials to halt testing in Miami, which has been worst hit by the coronavirus, for at least three days because many of the sites operate outdoors, in tents. Under normal circumstances, the sites have the capacity to test hundreds of people per day.

“We had to put safety first,” Miami-Dade County Mayor Carlos Gimenez said at an online news conference Friday. “We will have thousands of tests that will not be conducted until we get these test sites up and running again.”

PROVO, Utah — The Utah County Commission will no longer consider a letter requesting that the county health department ask the governor to grant the county exemptions to the statewide public K-12 school mask mandate after a new state order seemingly addressed all concerns.

The Daily Herald reported that Commissioner Bill Lee pulled the letter after a state order “clarified every single thing” requested.

The order is effective until Dec. 31 and clarifies a number of exemptions. Those exemptions include children under 3, people with medical conditions preventing them from wearing a facial covering, students practicing social distancing and students eating and drinking outdoors.