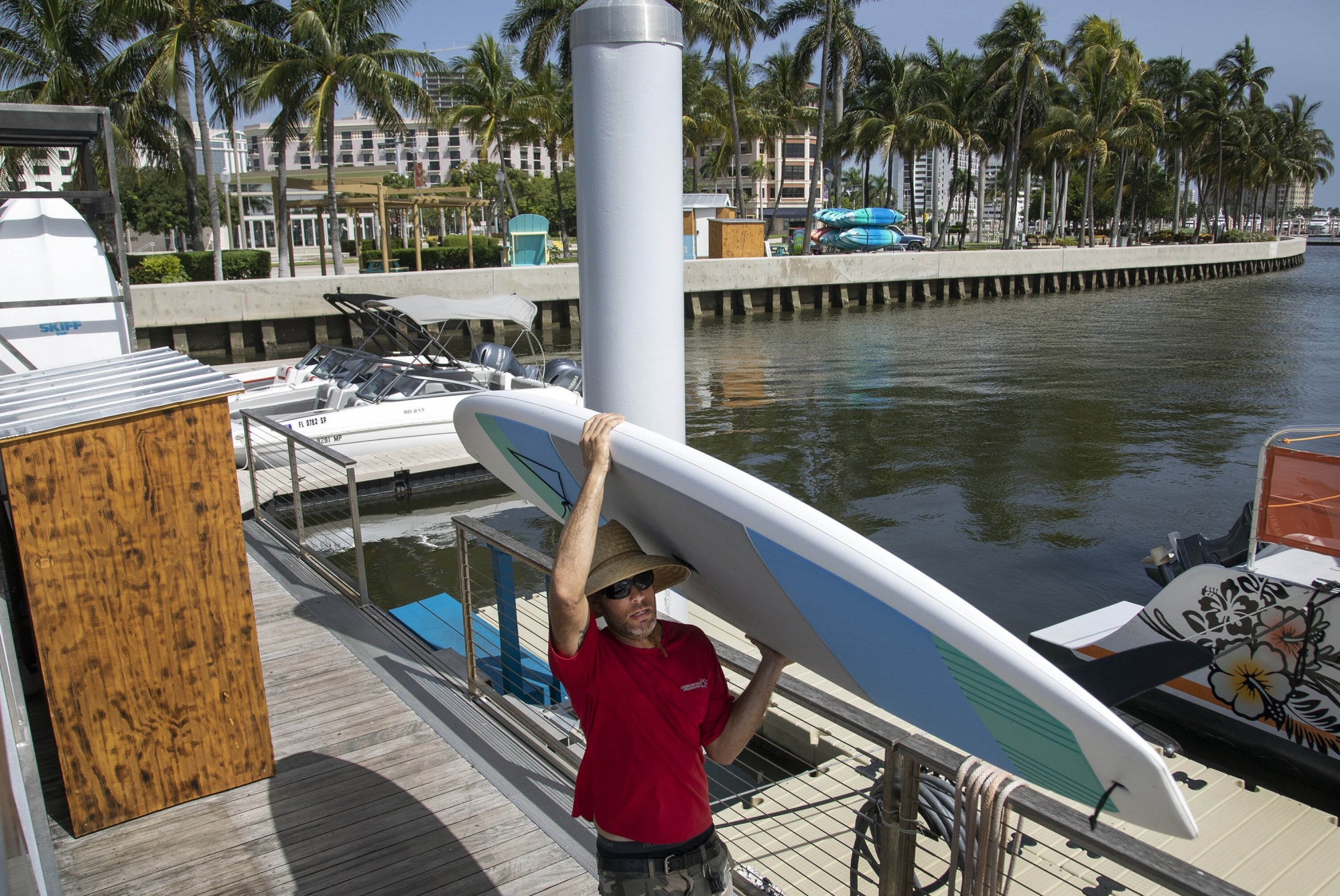 SAN JUAN, Puerto Rico (AP) — Hurricane Isaias snapped trees and knocked out power as it blew through the Bahamas on Saturday and churned toward the Florida coast, where it is threatening to complicate efforts to contain the coronavirus in a hot spot.

The storm is piling another burden on communities already hard-hit by other storms and sickness.

Florida authorities closed beaches, parks and virus testing sites. Though officials do not expect to have to evacuate people, they wrestled with how to prepare shelters where people can seek refuge from the storm if necessary, while safely social distancing to prevent the spread of the virus.

“The most important thing we want people to do now is remain vigilant,” said Gov. Ron DeSantis.

Authorities in North Carolina ordered the evacuation of Ocracoke Island, which was slammed by last year’s Hurricane Dorian. Meanwhile, officials in the Bahamas opened shelters for people in Abaco island to help those who have been living in temporary structures since Dorian devastated the area, killing at least 70 people.

Isaias — pronounced ees-ah-EE-ahs — had maximum sustained winds of 75 miles per hour (120 kilometers per hours) at 2 p.m. Saturday, a decline from earlier in the day, the U.S. National Hurricane Center said. It is expected to regain strength as it heads over warm water toward Florida.

The center of the storm is forecast to approach the southeast coast of Florida early Sunday morning and then travel along the state’s east coast throughout the day. It is expected to remain a hurricane through Monday then slowly weaken.

Despite the approaching storm, NASA says the return of two astronauts aboard a SpaceX capsule is still on track for Sunday afternoon. Doug Hurley and Bob Behnken are preparing to make the first splashdown return in 45 years, after two months docked at the International Space Station. They are aiming for the Gulf of Mexico just off the Florida Panhandle, and flight controllers are keeping close watch on the storm.

Isaias has already been destructive in the Caribbean: On Thursday, while still a tropical storm, it uprooted trees, destroyed crops and homes and caused widespread flooding and small landslides in the Dominican Republic and Puerto Rico. One man died in the Dominican Republic. In Puerto Rico, the National Guard rescued at least 35 people from floodwaters that swept away one woman, whose body was recovered Saturday.

Concerns about the coronavirus and the vulnerability of people who are still recovering from Dorian were adding to worries about the Category 1 storm.

Bahamian Prime Minister Hubert Minnis relaxed a coronavirus lockdown as a result of the storm, but imposed a 10 p.m. to 5 a.m. curfew. He said supermarkets, pharmacies, gas stations and hardware stores would be open as long as weather permitted.

“The center of COVID-19 now is in Grand Bahama,” the island’s minister, Sen. Kwasi Thompson, told government-run ZNS Bahamas. “No one wanted to see a situation where we are now facing a hurricane.”

Paula Miller, Mercy Corps director for the Bahamas, told The Associated Press that people on Grand Bahama were still standing in line for gas on Saturday ahead of the storm.

“People are doing the best they can to prepare, but a lot of businesses still have not fully repaired their roofs or their structures” since Dorian, said Miller. “Even a lower level storm could really set them back.”

Florida has been a coronavirus hot spot in the United States in recent weeks, and the added menace of a hurricane ratcheted up the anxiety there as well. State-run virus testing sites are closing in areas where the storm might hit because the sites are outdoor tents, which could topple in high winds.

Natalie Betancur, stocking up at a grocery in Palm Beach Gardens to ride out the storm, said that the storm itself doesn’t cause her a great amount of concern.

“The hurricane is not that serious, but I feel that the public is really panicking because it’s a hurricane and we’re in the middle of a pandemic,” she said.

DeSantis, the governor, said Saturday that 12 counties have adopted states of emergency, although no immediate evacuation orders have been given. He also said that hospitals are not being evacuated of coronavirus or other patients.

The Republican governor told a morning news conference that the state is prepared with stockpiles of personal protective equipment, generators, bottled water and meals ready to be distributed.

The pandemic forced officials to wrestle with social-distancing rules at the same time as disaster response.

At one of four shelters in Palm Beach County on Saturday afternoon, people had their temperatures checked at the door before entering. Public buses are transporting residents to the shelter as crews work to sanitize the buses between stops.

Miami-Dade Mayor Carlos Giménez said each person in a shelter needed to have 40 square feet (nearly 4 square meters), and cafeteria-style dining would not be allowed. Any evacuees infected with the new coronavirus would be isolated in classrooms separate them from the general population, Giménez said.

Kevin Shelton, the owner of Causeway Mowers in Indian Harbour Beach, Florida, said his store has been packed since Friday. Folks streamed in to buy generators, chain saws and other provisions. On Saturday morning, Shelton and his wife served at least 25 customers an hour, double the business they’d normally do on a weekend.

“We’ve been in the area almost 50 years. We keep an eye on every storm,” he said. “It could shift in this direction at any moment.”

This story has been updated to correct the spelling of Hallandale Beach. It also corrects when an evacuation began on North Carolina’s Ocracoke Island. Visitors were told to leave Friday and residents and property owners starting Saturday morning.