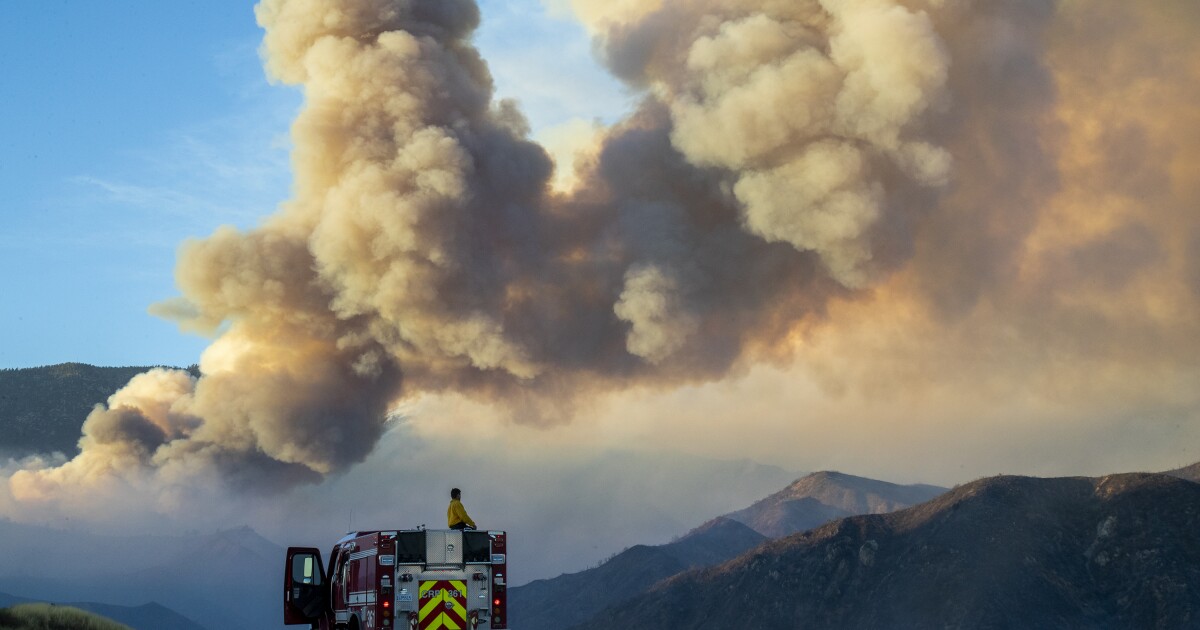 California’s first major wildfire of the year grew to more than 20,000 acres overnight after destroying one home, forcing thousands more to be evacuated and sending up a plume of smoke so massive that it generated its own winds, authorities said.

The Apple fire in Riverside County was burning up steep and rugged hillsides as it spread north and east toward the San Gorgonio Wilderness while continuing to threaten homes to the south. The fire had burned at least 20,516 acres and was 0% contained as of 6 a.m. Sunday.

The terrain is characterized by a web of narrow canyons and drainage channels, which “is creating this higher potential for extremely active fire behavior,” said Lisa Cox, fire information officer for the San Bernardino National Forest.

“What we saw yesterday was a perfect example of that,” she said. “So we did see a very large pyrocumulus cloud just kind of mushroom up into the sky that people could see all the way to Los Angeles.

“And what happens is when those really thick fuels start ripping and burning in those canyons, it creates this incredible power. The fire actually — it doesn’t even matter what the wind’s doing at that point — it just creates its own weather.”

The cloud pushes embers down and blows them in all directions, creating the potential for rapid and unpredictable spread, Cox said.

Still, she said, they can prepare by making sure evacuations are ordered and putting down retardant and water in anticipation of where the embers might rain down.

Officials were expecting to see similarly extreme fire behavior on Sunday. Most of the developed areas being threatened by the fire were along its southern flank, and the fire was expected to grow further in that direction as winds picked up later in the day, Cox said.

More than 1,300 firefighters were battling the blaze using both ground equipment and helicopters and air tankers. They included structure protection crews whose mission is “to get down into those communities and save homes,” Cox said.

Multiple evacuation orders and warnings remained in place Sunday in both Riverside and San Bernardino counties. Roughly 7,800 residents in over 2,500 households were ordered to evacuate, April Newman, a public information officer with the California Department of Forestry and Fire Protection and the Riverside County Fire Department, said Saturday afternoon.

An evacuation center was opened at Beaumont High School for people and animals.

Weather conditions were also contributing to the fire’s rapid spread. Humidity levels were expected to plummet to the teens by mid-afternoon Sunday, with poor overnight recovery along slopes and ridges.

Westerly winds were forecast to pick up after 3 p.m. and peak between 6 and 9 p.m. at 10 to 20 mph, with gusts of up to 30 mph, said Miguel Miller, meteorologist with the National Weather Service in San Diego. The pattern of winds strengthening in the late afternoons and evenings will likely persist for the next several days, he said.

“It’s not anything outrageous or very strong but it’s enough to push the fire around a little bit,” he said.

But if the fire spreads another 10 to 15 miles to the east, where the San Gorgonio pass creates an intense natural wind tunnel, the situation could change, he said.

“If we can keep it out of that tunnel … then we’ll be doing firefighters and everybody a big favor,” he said. “But hopefully these winds that we’re having will not send it into that dangerous area.”

The U.S. Forest Service on Saturday ordered an emergency closure of the San Gorgonio Wilderness, including the Pacific Crest Trail between the forest boundary and Forest Road 1N01. Forest Service recreation areas in the Forest Falls area were also closed.

Forest Service recreation staff and volunteers have been visiting trailheads to let hikers and backpackers know that the wilderness area is closed, and on Saturday announcements were also made via helicopter, Cox said.

“They’re not in danger right at this moment but we preemptively want to make sure they have enough time to get out,” she said.

The vegetation fire was first reported at 4:55 p.m. Friday in the 9000 block of Oak Glen Road, according to the Riverside County Fire Department. There wasn’t word on its cause.

The fire was burning through thick fuels, which were fueled by seasonal rainfall that was close to average in the area, Miller said.

“That made for a decent green up, as they call it, in the springtime — leafing out the vegetation, the grasses get going,” he said. “Then by May, June, certainly by July you get a curing. Those grasses simply dry up, they turn yellow, they turn flammable. And that’s why summertime is the high fire season.”

“High fire season is defined differently for every season because it depends a lot on vegetation growth, winter rains and the number of dry events such as offshore flow and Santa Anas that dry out vegetation prematurely,” he said. “… But late July and early August is certainly right when we start ramping up.”