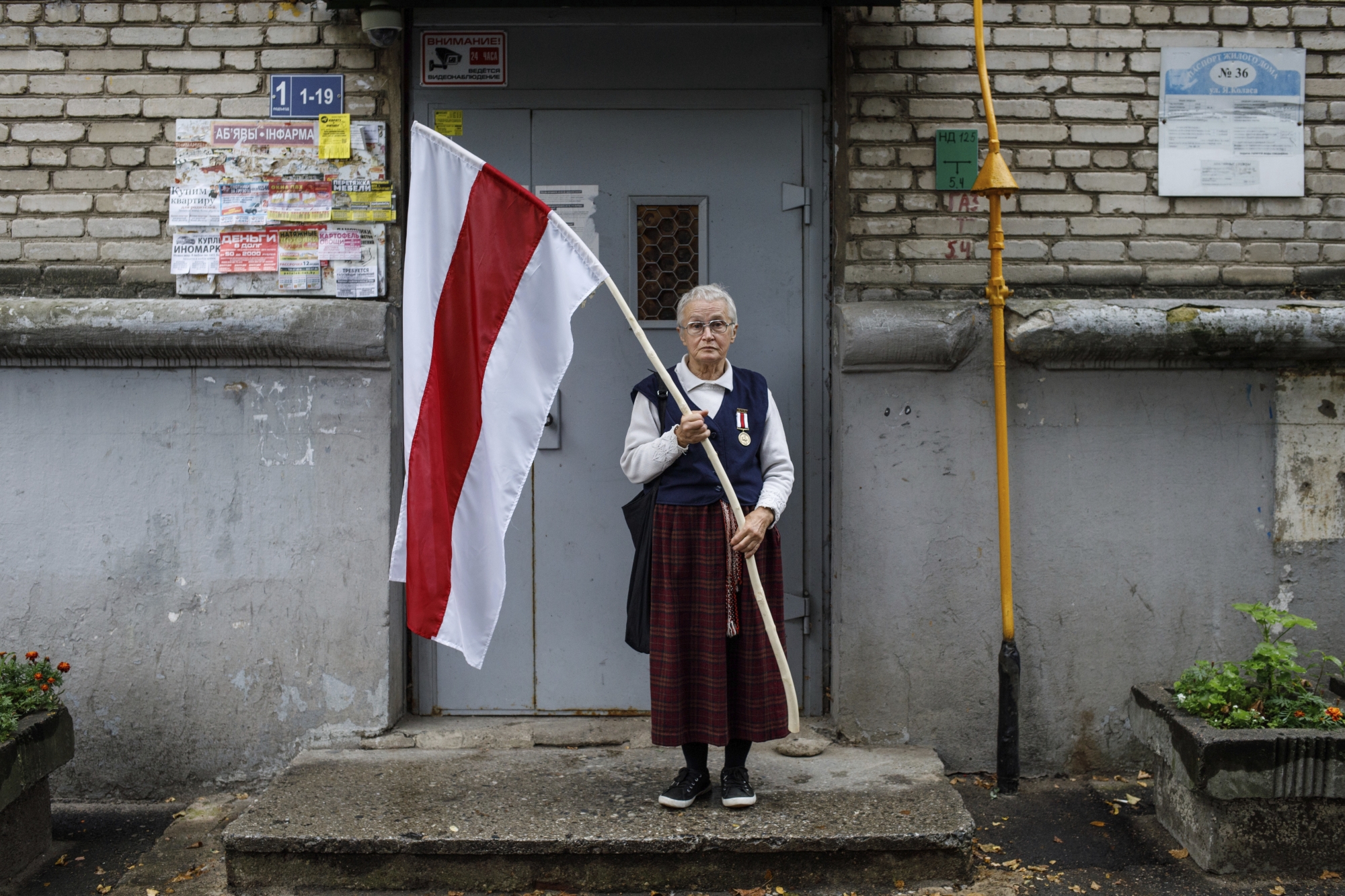 MINSK, Belarus (AP) — Thousands of protesters who have flooded Belarusian cities for six weeks of demonstrations to demand an end to the 26-year rule of the country’s authoritarian President Alexander Lukashenko include people of all ages, professions and social groups.

While younger people make up the bulk of the protests pushing for Lukashenko’s resignation after the Aug. 9 vote that the opposition sees as rigged, many retirees also have joined the daily demonstrations. Some of them spoke to The Associated Press about their motives and their hopes.

The 73-year-old former geologist has become one of the most recognizable faces of Belarus protests, fearlessly waving a huge red-and-white opposition flag in front of riot police.

On more than 100 occasions, the police seized the flag from her, but every time she would make a new one.

When police told her that she was violating a ban on unauthorized demonstrations, she responded by saying “I’m taking a walk” — the snappy reply now chanted by thousands of participants in daily protests. A selfie with Bahinskaya has become a popular rite for many young protesters.

“I noticed that the riot police more rarely beat protesters when they see elderly people among them,” she told The Associated Press. “So I come out to protest as a defender, an observer and a witness. I’m psychologically and intellectually stronger than the police. Even among those who detained me, there were people who respected me.”

Bahinskaya says she overcame her fear of authorities when Belarus was still part of the Soviet Union. She was detained dozens of times and the fines she was ordered to pay have run into the equivalent of $20,000.

The 69-year-old former diplomat took part in opposition protests long before last month’s vote. His daughter fled the country to Ukraine with her boyfriend after they were beaten by police in the first days after the election, but Batsyan continued to attend demonstrations together with his wife.

“Now we attend the marches together,” Batsyan said. “Our dream is to live in a free Belarus at least for a while. I have seen a lot in my life, I don’t fear anything anymore and I can’t look at what’s going on with indifference.”

Ruzhenkova, a 66-year-old former cello teacher at a musical school, sees the regular protests as a “breath of fresh air.”

She denounced Lukashenko’s description of protesters as “drug addicts,” noting that his speeches demonstrate a “complete lack of culture.”

“I don’t want that president. I have no respect for him and feel shame” for what he says and how he says it, she said.

Ruzhenkova said Lukashenko’s cavalier dismissal of the coronavirus outbreak, which he advised people to ward off by riding a tractor, having a regular shot of vodka and visiting saunas, angered Belarusians and helped fuel the protests.

“The coronavirus has demonstrated that he hasn’t shown any empathy,” she said.

Ruzhenkova deplored the support offered to Lukashenko by Russia, Belarus’ main sponsor and ally, arguing that without it Lukashenko would have been forced to step down already.

Ravinski, a 75-year-old pathologist, attended some protests with his daughter and a granddaughter.

“I come out to protest so that my children and grandchildren have a good life,” he said. “By joining the protests, I show that everyone can do it without any fear.”

Ravinski has become widely popular on social networks when he faced a phalanx of police in full riot gear at a protest shortly after the vote and said: “I can’t keep watching this madness, and that’s why I came here. And I will keep coming until I get killed.”

The 68-year-old former sales expert said she had little interest in politics before signing up to work as an observer during the Aug. 9 election and witnessing vote-rigging.

“The way election officials treated us was disgusting and it made me angry,” she said. “I can’t accept such massive lies. Lukashenko has lost his mind, dignity and conscience, he’s trying to cheat the entire nation.”

Early during the protests, she sheltered a young protester when he was hunted by police during a post-election raid in the Belarusian capital. Koval said she attends opposition demonstrations despite having heart problems.

“I can’t allow the thought that Lukashenko will not step down,” she said. “And I will fight to end his desperate clinging onto power.”

Marachkin, an 80-year-old painter, denounces the Belarusian leader who frequently admired the Soviet Union as a “Soviet holdover.”

The authorities have barred Marachkin from having personal exhibitions and removed his paintings from the national art museum.

“Taking part in protests is a therapy for me,” Marachkin said. “Otherwise, I would have stayed in bed and would have died long ago. The opposition marches fill me with energy.”

The 60-year-old Lahatskaya, who worked in the construction sector, said she tries to speak to riot police when she attends protests, which she has been doing almost every day for a month.

“I’m trying to find something humane in them,” she said.

She argued that the Belarusian leader has lost public support, noting that even her 94-year-old father who always voted for Lukashenko cast his ballot in August for opposition candidate Sviatlana Tsikhanouskaya.

She would like to personally speak to the Belarusian leader to persuade him to step down.

“I want to talk to Lukashenko. I think he will listen to me,” she said.

The 85-year-old Hryb, a former teacher, said he hopes to live to the day when Lukashenko steps down, adding that it should be declared a national holiday.

“It will become the country’s main holiday,” he said.

Hryb lamented that the Belarusians have been patient with Lukashenko for too long.

“I join protests to make Belarus a democratic and economically developed European country,” he said. “I have been struggling for it for my entire life.”

Kachanouskaya, a 72-year-old English teacher, said she has participated in protests against Lukashenko’s rule ever since he took the helm in 1994.

“It’s necessary to learn how to control natural fear,” she said. “Why should I fear – I do everything right!”

She said she has instructed her 16-year-old grandson how to avoid being detained by police, adding that he was rounded up once because he failed to follow her advice.