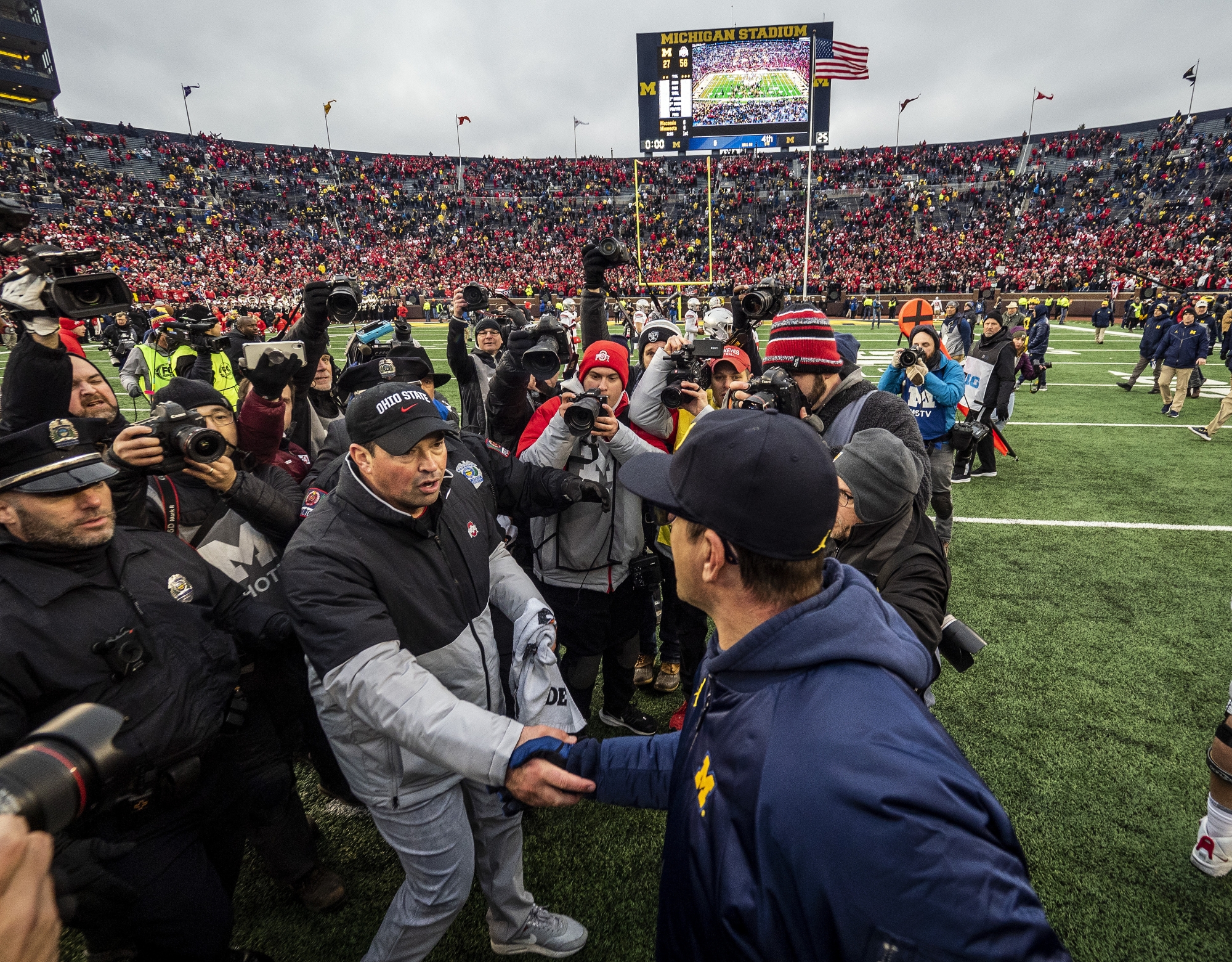 For the second straight weekend, the Big Ten made news without playing.

Last week, the conference was in the process of putting together a restart plan for football.

On Saturday, the Big Ten released its schedule 3.0, doing it a little bit at a time on Fox’s Big Noon Kickoff pregame show. The Big Ten also took up much of the conversation on ESPN’s “College GameDay,” which had interviews with Michigan coach Jim Harbaugh, Ohio State quarterback Justin Fields and Big Ten Commissioner Kevin Warren.

Nice flex and a heady play as the Big Ten is about to drop off the radar until its season starts the weekend of Oct. 24.

The Southeastern Conference kicks off next week and the ACC and Big 12 get cranked up, too.

Most notable on the Big Ten’s schedule was how Nebraska will start the season: at Ohio State and home for Wisconsin. Oof!

No Big Ten school made as much of a public fuss over the conference’s initial decision to postpone the season as Nebraska. The brutal opening schedule against the conference’s two division winners from last season might have been a coincidence, but it did not go unnoticed.

The Huskers also play Penn State in the fourth game of the season, giving Nebraska easily the toughest cross-division games of any team in the West Division.

Nebraska had both Ohio State and Penn State on its original nine-game, pre-pandemic conference schedule, along with Rutgers. The Big Ten used those schedules to set these schedules, dropping one of the three crossover games for each team.

Athletic director Bill Moos told the Omaha-World Herald that he pushed to rework schedules more thoroughly to provide competitive balance. He also suggested having only division games count toward the division race.

He said he lost every argument.

“For obvious reasons, I was hoping we could dissemble the schedule because of unique circumstances and rebuild it to be fair for each school in the conference,” Moos told the newspaper Saturday. “I was outspoken on that, to the point where they heard it from me every day. The rationale was there, I didn’t think we needed to follow it. Nebraska is playing five AP preseason Top 25 teams. Ohio State’s playing two.”

Nebraska has lost five straight against Ohio State, which has became a yearly rivalry since the Big Ten went to an East-West division structure. The Big Ten was hoping to create an annual showdown between two tradition-rich programs, but Nebraska has not held up its end of the deal. Average score: Buckeyes 53, Cornhuskers 19.

Ohio State definitely caught a break with the new schedule. The crossover game that came off its slate was Iowa, leaving the Buckeyes with Nebraska and Illinois.

It might not have been the plan to cut Ohio State, the league’s clear favorite and defending champ, some slack. But it’s not a terrible idea.

When the SEC redid its schedule to make it 10 conference games, the league ended up feeding its weaker teams to its powerhouses. Missouri got added to LSU and Alabama’s schedules. Arkansas added games against Florida and Georgia.

Regardless of whether it was intentional, conferences do not gain anything come College Football Playoff selection time by making life tougher on their best teams.

The Pac-12 has learned that the hard way over the playoff era.

UCF has another Heisman Trophy contender quarterback from Hawaii.

Dillon Gabriel, who ended up winning the job during last season as a freshman, appears even better this year. Gabriel went to the same high school as teammate McKenzie Milton, who finished in the Heisman top 10 in 2017 and ’18.

Few quarterbacks are as fearless throwing deep as Gabriel. Against Georgia Tech, he passed for 417 yards and four touchdowns, averaging 10 yards an attempt and 15 yards a completion. It was a convincing victory against a Power Five team, if only a rebuilding P5 squad.

Milton is still hoping to play again after a gruesome leg injury two seasons ago. Just getting on the field would be a miraculous comeback. But make no mistake, Gabriel is the man at UCF and the Knights have a team that could again make a case for something more than just an American Athletic Conference championship trophy.

“You saw what happened last week,” Gabriel said, referring to Georgia Tech’s victory at Florida State. “I guess you can say we’re the best team in Florida.”

Miami might take issue with that assessment by Gabriel.

The 17th-ranked Hurricanes unleashed their new offense on No. 18 Louisville and pulled away for a victory.

On the flip side, Miami’s got some work to do on defense. Still, Hurricanes fans who have suffered through so much anemic offense in recent years must be giddy.

“A lot to fix, but a lot to be proud of,” coach Manny Diaz said of the effort.

Miami gets the primetime treatment again next week at home against Florida State. The Seminoles will be without head coach Mike Norvell, who tested positive for COVID-19.

AROUND THE COUNTRY: Last note on the Big Ten. Now that the conference has a schedule in place, its teams will become eligible for inclusion in the AP Top 25 starting with the poll released on Sunday, Sept. 27. Voters don’t have to include Big Ten teams before they play, but they can. … The Pac-12 is likely to jump back into fall football season later this week. The conference’s university presidents meet Thursday. When to start is the hang up. Some Pac-12 teams are way behind in preparation, but not all. A Halloween start gives room to get seven games in before a Dec. 19 championship that puts the Pac-12 in play for College Football Playoff and New Year’s Six bowl selection. But is a six-week ramp up enough when the Northern California schools are still working to get local COVID-19 restrictions lifted? … Navy, which started the season being outscored 79-3, scored the last 27 points of the game to beat Tulane on a last-second field goal. The Trident Trophy Game (Green Wave vs. Midshipmen) has produced some wild results in recent years. The AAC rivals have split the last four games by a combined total of nine points. … Top-notch debut by Boston College’s new coach (Jeff Hafley) and new quarterback (Phil Jurkovec). The Eagles rolled over Duke. … Louisiana-Lafayette’s encore after upsetting Iowa State was dramatic. The Ragin’ Cajuns came from two touchdowns down and beat Georgia State in overtime. … After going 0-3 against the Sun Belt last week, No. 11 Oklahoma State had the Big 12 sweating again. The Cowboys managed to hold off Tulsa in a mess of a game. The Golden Hurricane committed 15 penalties and did not convert a third down, yet hung around as Oklahoma State played most of the game without quarterback Spencer Sanders (ankle).

Follow Ralph D. Russo at https://twitter.com/ralphDrussoAP and listen at http://www.westwoodonepodcasts.com/pods/ap-top-25-college-football-podcast/