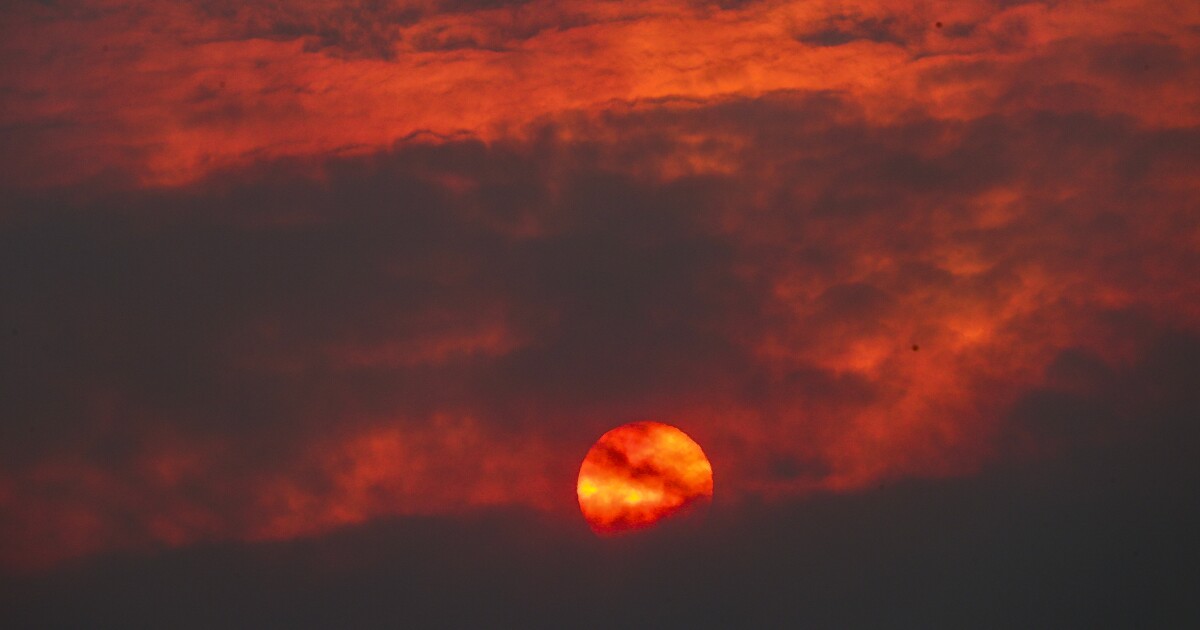 The Bobcat fire exploded Friday amid intense winds, burning homes in the Antelope Valley and spreading in multiple directions.

As of Saturday morning, the fire had burned more than 91,000 acres and was threatening some desert communities along Highway 138.

“Yesterday and though the night, the fire made a dramatic push due to the windy conditions and the fire reached Juniper Hills,” Capt. David Dantic, public information officer for the fire response effort, said Saturday morning.

Several homes in the remote foothills community were lost, Dantic said. The extent of the destruction wasn’t immediately clear.

“We’ll get a better assessment once our teams go out, but we were in an active firefight yesterday,” he said. He said firefighters were continuing to work to protect homes Saturday morning.

Though the fire approached the high desert community of Valyermo, a Benedictine monastery there appeared to have escaped major damage Saturday.

About 11 a.m., 21 weary members of a Los Angeles County Fire Department strike team plopped down in the shade to steal a few minutes’ rest at St. Andrew’s Abbey after spending 36 hours defending rural homes from the onward march of flames.

Throughout the night the firefighters were clearing brush from around homes in the foothill region just south of the community of Pearblossom. Many of those homes, along with the Abbey’s manicured grounds, were spared.

But the serenity among the cedars and elms lasted less than 20 minutes.

“We just got here and look — the winds are kicking up,” said firefighter specialist David Delgado with a sigh.

He predicted his team would see smoke curling up from the surrounding junipers within minutes. “Then we’ll be out on the fire lines again,” he said.

The fire, which had been burning up in the San Gabriel Mountains, spread rapidly onto the desert floor Friday as winds arrived. Some residents had to flee as the fire jumped around, hitting some homes but sparing others.

Flames tore through stands of yucca and juniper, leaving behind piles of ash resembling leopard spots and transforming the landscape into a smoldering wasteland.

The fire was 15% contained as of Saturday morning, but fire officials said they have a tough weekend ahead with hot conditions and more winds forecast.

The National Weather Service was warning of an elevated fire weather threat both Saturday and Sunday due to a combination of wind and low relative humidities.

“We are expecting another round of some pretty gusty south to southwest winds over the Bobcat fire this afternoon and into the evening hours,” said David Gomberg, meteorologist with the National Weather Service in Oxnard.

He said the wind isn’t expected to be as strong as Friday, when gusts reached 40 to 45 mph, but gusts of 25 to 35 mph are expected. Humidity is forecast to be in the teens.

The fire has more than doubled in size in just a few days, growing nearly 20,000 acres from Friday to Saturday alone. Officials said the fire has been so challenging because it is burning in areas that have not burned in decades, and because the firestorms across the state have limited resources. There are now more than 1,600 firefighters on the lines.

Crews are trying to stop the blaze from marching in the other direction — east of Highway 39 — and working to protect Mt. Wilson, topped by its namesake observatory as well as numerous communication towers. Firefighters have put a containment line around part of Mt. Wilson but are “still not out of the woods” because hotspots could flare up, Dantic said.

There was also concern that wind could push the fire northeast toward the Wrightwood area, which remained under an evacuation warning Saturday.

“Our goal is to make sure we contain the fire but fire is unpredictable and it can do anything at any point and time,” Dantic said. “We do have units strategically in place so we can stop this fire.”

He urged residents to heed evacuation orders and to be ready to leave if placed under an evacuation warning.

Residents in northern foothill communities, including portions of Juniper Hills, Devil’s Punchbowl and Paradise Springs, were placed under evacuation orders earlier in the week as flames closed in on the area.

Fire crews have made significant progress on the southern edge of the fire, which jeopardized several foothill communities, including Arcadia and Sierra Madre.