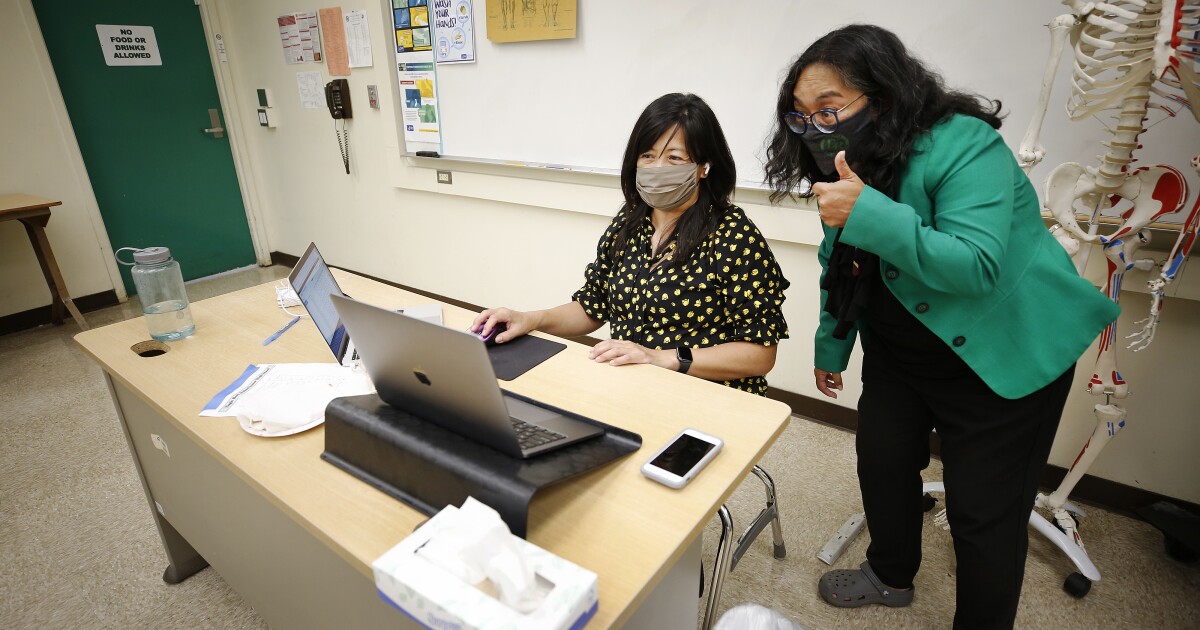 California’s job market improved slightly in August, but the state has regained just a third of the jobs it lost since the COVID-19 pandemic forced thousands of businesses to close.

In July, employers had hired 83,500 workers after Gov. Gavin Newsom and county officials allowed many workplaces to reopen.

Compared with August of last year, California payrolls shrank 9.1%. About 2.6 million jobs were lost in March and April because of the coronavirus.

California’s unemployment rate fell to 11.4% last month from 13.5% in July. “The slight decrease is not bad news,” said Fernando Lozano, a Pomona College economist. “But unfortunately, sectors with the most vulnerable workers in services, leisure and hospitality are still seeing a rise in unemployment.”

August was the first month since March, when the pandemic took off, that joblessness was below the 12.3% mark California reached in 2010 during the height of layoffs spurred by the Great Recession.

In February, California’s economy was on a roll, with unemployment of just 3.9%.

Los Angeles County’s August jobless rate, at 16.6%, was far higher than the state level and worse than every other California county but Imperial, where unemployment was at 22.9%. L.A. County has suffered disproportionately from losses in tourism, business-related travel and the entertainment industry.

What seemed like encouraging news on California’s jobless rate was tempered by the fact that the state’s rate was far worse than the nation’s. U.S. unemployment fell to 8.4% in August from 10.2% in July.

In the Golden State, as in the nation, many people have left the labor force, which counts those who have a job and those who are looking for a job. In August, California’s labor force shrank by 117,000 people, accounting for about a third of the decline in the unemployment rate. Since February, 807,000 have dropped out.

“People are worried about becoming infected by the coronavirus, have childcare or other family responsibilities, or see few prospects for employment,” said Lynn Reaser, an economist at Point Loma Nazarene University in San Diego.

Reaser predicts that California’s job market will worsen this fall. “Most of the state’s counties are in the most restricted of the four risk zones recently established by the governor,” she said. “So many businesses will be limited or shuttered.”

Jobless Californians are finding themselves with a frayed safety net. The federal government’s $600 weekly unemployment supplement, paid out to those who qualified for state benefits, expired at the end of July.

California’s unemployment insurance covers about half of average weekly earnings up to $450. The federal supplement had enabled many jobless people to stay afloat, paying for basic living expenses.

“When it rains, it pours,” said Sung Won Sohn, an economist at Loyola Marymount University. “The partial reimposition of economic restrictions due to COVID-19, the wildfires and the end of the federal government’s stimulus program had a big impact on August employment.”

Congressional Democrats had passed a House bill to extend the $600 supplement, but it was blocked by the Republican-led Senate, which views the benefit as too generous. The deadlock is expected to continue through the end of the year.

An executive order by President Trump last month authorized $300 a week in additional benefits under the Lost Wages Assistance program, but it is set to expire this month. The new supplement does not cover workers who receive less than $100 a week in state unemployment insurance, thus excluding 192,000 of the poorest Californians, according to a study by the California Policy Lab.

Even a majority of those who get the $300 supplemental payment will have benefits below the poverty level, with the total benefits averaging $575 per week, the report said.

“We expect job growth to only get harder from here,” said Scott Anderson, an economist at Bank of the West in San Francisco. “The inability of Congress to pass another rescue fiscal package [and] the California wildfires could further delay the state’s economic recovery.

“California was losing net migrants because of high costs of living and taxes even before the wildfires, and those trends will likely accelerate as more folks search for greener pastures. This means fewer jobs in sectors like retail trade, education, healthcare, government and real estate than would be created if in-migration were more vigorous.”

Six of California’s 11 industry sectors gained jobs last month. Government grew by 66,100, thanks to the census and the hiring of teachers for the school year. Trade, transportation and utilities gained 26,000, buoyed by transportation and warehousing, as companies such as UPS, FedEx and Amazon added jobs. General merchandise employment benefited from consumers buying more groceries as they eat out less.

Leisure and hospitality shrank by 14,600, the largest job loss of any industry, as hotels and restaurants continued to suffer. The sector has shed 561,900 jobs since March.

Orange County gained 3,700 jobs in August for a total of 1.48 million. Over the year, the county lost 11.2% of its jobs, the steepest drop in the Southern California coastal region, as the Disneyland Resort, its largest employer, closed. Its unemployment rate was 9.9% in August, down from 12.4% in July.

The Inland Empire, composed of Riverside and San Bernardino counties, gained 15,400 jobs in August for a total of 1.4 million, as warehouses boomed with a national rise in e-commerce. Compared with a year earlier, the region lost 8.6% of its jobs. Unemployment was 11% in August, down from 13.4% in July.

Northern California’s strong technology sector has enabled many employees to work from home during the pandemic, moderating job losses. San Francisco’s unemployment rate was 8.8% in August. San Mateo and Santa Clara counties’ was at 7.5%.

In a statement on the August jobs report, California Labor Secretary Julie Su hailed new state laws protecting workers and offering small-business benefits. “Sustained recovery depends on every Californian doing what they can to slow the spread of this virus,” she said, “including giving workers a real choice to stay home when needed, isolate, and follow public health orders.”

California’s payroll numbers come from a federal survey of 80,000 California businesses. The unemployment rate is from a separate survey of 5,100 households.