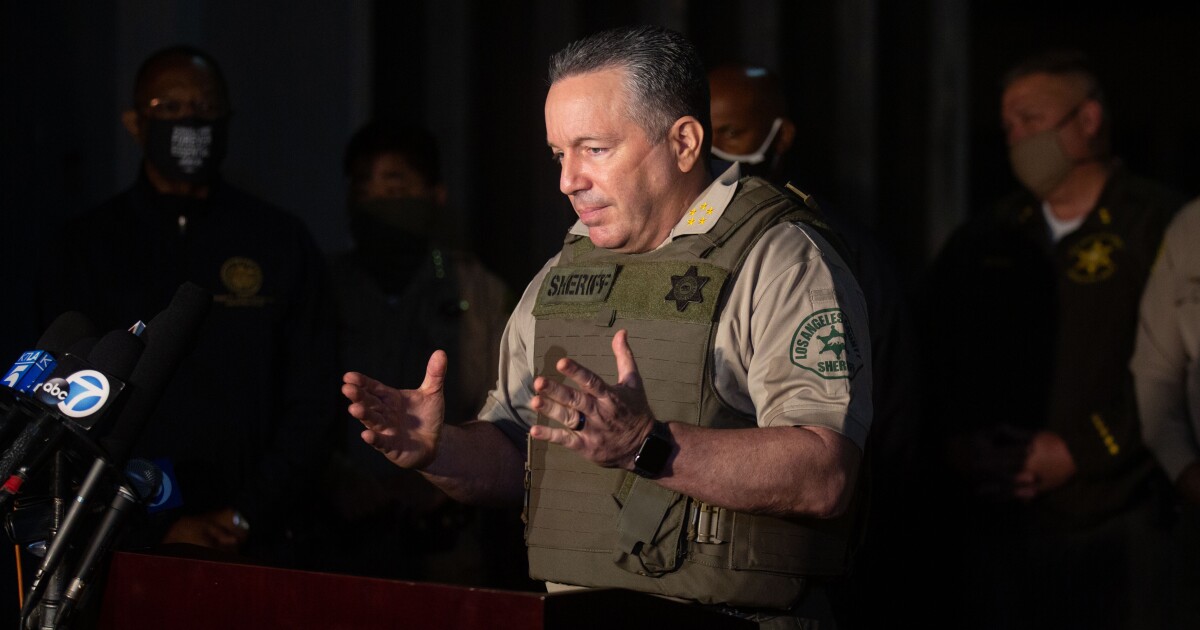 There was stunned silence, and then several fellow commissioners echoed support. One requested drafting a resolution of no confidence in Villanueva.

While Bonner acknowledged that he’d just “severed” his bond with the sheriff, he pressed his colleagues to deliberate carefully, reminding them that “the commission needs to maintain a relationship with the sheriff.”

Bonner’s words marked the uncharted waters that officials will now need to navigate as tensions between Villanueva and those charged with overseeing the department reach a new high.

While Villanueva, an elected official, has refused to step down, experts emphasized how a new level of public animosity among the sheriff, the oversight commission and the Board of Supervisors may prove difficult to diffuse.

In the background is rising friction between the Sheriff’s Department and some communities that accuse the department of police brutality and unwarranted shootings, which have spawned ongoing protests.

Supervisors have long complained that Villanueva’s department lacks transparency and clashed over policing reform measures. Since taking office in 2018, Villanueva has fought repeatedly with the civilian oversight panel and board members, who have accused him of rehiring officials with tainted backgrounds and unraveling policing reforms instituted after a massive corruption scandal that brought criminal convictions against former Sheriff Lee Baca and other commanders.

“Both sides are doubling down and the political rhetoric is taking over,” said Frank Zerunyan, a professor on the practice of governance at USC. “The sheriff feels very strongly about his mandate and what he’s doing, and the Board of Supervisors and those who have called for his resignation feel strongly about his lack of leadership.

In an interview, Villanueva told The Times that he is “obviously not” concerned about the expression of no confidence in his leadership, holding that the Board of Supervisors wants “a sheriff on the leash.”

“It’s a very coordinated cabal of supervisors who have been trying to get me out of office even before I took office,” he said. “It’s a proxy war, that’s all it is, and their surrogates are on the Oversight Commission.”

On Thursday, several commissioners and two supervisors supported calls for Villanueva’s resignation, with some expressing concerns about the sheriff’s lack of compliance with subpoenas and holding he has refused to share information with inspector general Max Huntsman, who has accused Villanueva of not cooperating with his investigations of possible violations of freedom of the press by the department.

Villanueva said that oversight “does not mean that Max Huntsman runs the Sheriff’s Department.”

“That’s their agenda, to try to paint me as someone unwilling to accept being transparent or oversight, and nothing could be further from the truth,” he said.

He said that oversight is provided by the state’s attorney general and that the inspector general’s role is limited.

“We can give them all the information in the world, and at the end of the day, all they can do is tell me ‘please,’” he said of the Oversight Commission and Huntsman.

In a written statement, Ron Hernandez, president of the Assn. for Los Angeles Deputy Sheriffs, said that “the community is looking for positive leadership, not elected officials squabbling.”

“Reform comes with communication and actual dialogue, not demands such as the call for the resignation of the sheriff, who was elected by a majority of the citizens of Los Angeles County,” he said. “We do not give up based on personality conflicts, although it appears some may.”

Debate has recently been revived about the authority of counties to monitor elected sheriffs. Some sheriffs argue that only voters can hold them accountable and that local government oversight is largely voluntary and restricted.

But the recent passage of Assembly Bill 1185 clarifies how counties can create oversight commissions for sheriffs and give those panels subpoena power.

Ed Obayashi, a Plumas County deputy sheriff and law enforcement policy advisor, emphasized how Villanueva is “not a lone ranger” in tensions between sheriffs and their overseers.

In Sacramento, for example, Sheriff Scott Jones in 2018 locked an inspector general out of department facilities after a report critical of a police shooting.

Obayashi said that sheriffs have discretion to act and speak more freely than police chiefs, who are appointed by and follow direction from city officials.

“There is a much higher degree of accountability between a police chief and city officials, as opposed to a sheriff like Villanueva who is an elected official who ultimately answers only to the electorate,” he said.

Andres Kwon, an ACLU attorney who specializes in police practices, said Villanueva’s defiance underscores “a crisis of checks and balances” due to the inability of elected officials to remove the sheriff.

He said the ACLU proposed a charter amendment to the Board of Supervisors last year that would give it the power to remove the sheriff on specific grounds.

“There’s been a community groundswell for Villanueva’s resignation — the Board of Supervisors is responding to that,” he said. “We are not holding our breath that Villanueva will resign, but this is further pressure on the board to take action.”

Zev Yaroslavsky, a former L.A. County supervisor, said he believed the calls for the sheriff’s resignation have power because they elevate the seriousness of the claims against him.

“This is not a spat between contesting politicians,” he said. “It’s about constitutional policing, it’s about his oath of office.”

The statements made by commissioners and supervisors, he said, may draw attention from the state attorney general, who could investigate the Sheriff’s Department. They also help to inform voters and may hamper Villanueva if he seeks reelection, he said.