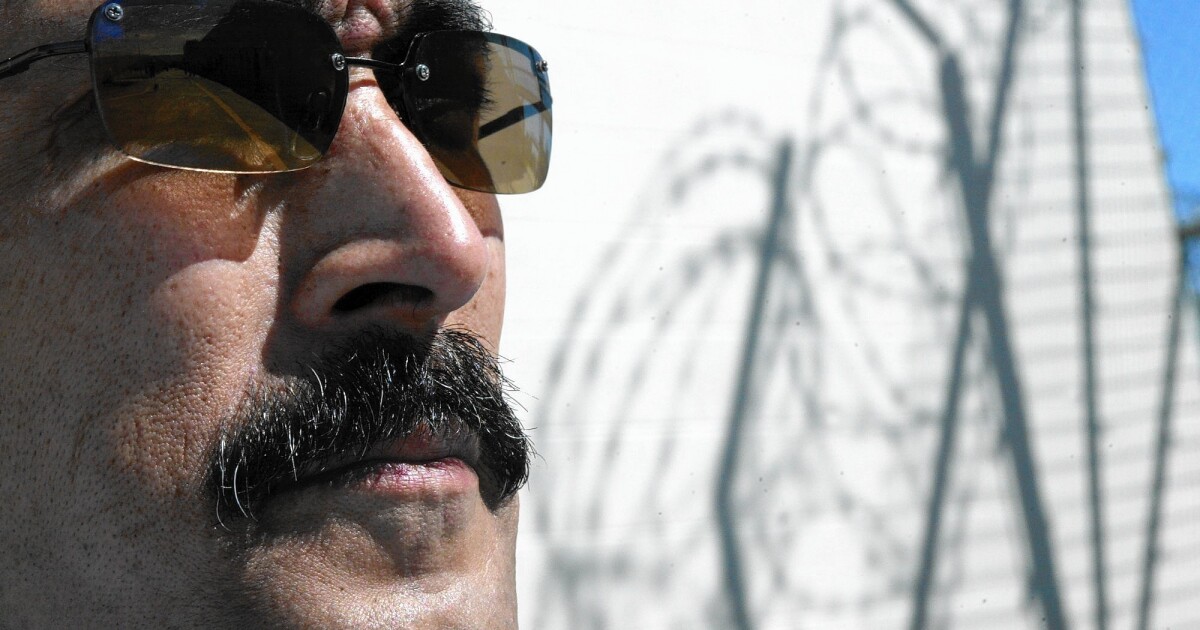 Rene Enriquez, a Mexican Mafia member who defected 18 years ago and helped law enforcement authorities incarcerate dozens of his onetime confederates, has been denied parole by Gov. Gavin Newsom, the fifth time in a row the state’s governor has overruled a recommendation to free him.

Newsom disagreed with a parole board’s opinion that Enriquez, 58, deserved to walk free after spending the last three decades in prison for a pair of murders committed in 1989. In a three-page letter signed Friday, Newsom said Enriquez’s assistance to law enforcement, his self-help programming and other efforts to make amends didn’t outweigh his “extensive history of violent and manipulative behavior.”

At the height of his influence, Enriquez, who was known as “Boxer,” controlled swaths of Southern California and earned a reputation as a ferocious killer. He ordered murders and committed them himself; he sold drugs and extorted dealers who peddled them in his territory; he attacked rivals of the Mexican Mafia and even some of its own members.

Asked how many murders he was involved in, Enriquez, testifying in a recent federal case, replied, “It’s fairly difficult to guesstimate. I — just being liberal, say 10.”

But now, Enriquez testified, he spends his days sorting recyclables for 11 cents an hour and deciphering intercepted gang communications in a special wing of Ironwood State Prison reserved for inmates who have turned their back on the Mexican Mafia.

Since defecting in 2002, Enriquez has testified by his count in 40 federal and state prosecutions. These courtroom disclosures and his testimony before the parole board offer a detailed account of his polarizing life, complete with musings about guilt and innocence, penance and mercy, the taking of life and what punishment the taker of it should be required to pay.

It is a question that has divided the parole board and the governor’s office for years.

Born in 1962 to a family with 14 children, Enriquez told the parole board he initially had a comfortable, middle-class childhood. His father owned a factory that made custom furniture, and his mother worked on and off in an electronics plant.

“We lived in good areas like Thousand Oaks and Cerritos,” he said. “I went to good schools.”

But at 11, Enriquez had his first run-in with the law: an arrest for stealing a car. He started selling drugs at junior high for his mother, a heroin addict, he told the board, and by the time he was 13, Enriquez followed his older brother into Arta, a Latino street gang that prowled Artesia and its environs.

He dropped out of school in the ninth grade, disgusting his father, who hated that his sons were in a gang and told them they looked “like clowns” in their baggy Pendleton shirts, Enriquez told the board.

Enriquez first went to prison at 18, convicted of taking part in a gang rape of an intoxicated girl and a string of armed robberies. To the teenager, going to prison didn’t seem like a setback.

“As counterintuitive or as crazy as it sounds, jail was a place we aspired to go,” Enriquez said in court. “It’s kind of like going to Harvard or Yale. For us, going to prison was the big time.”

For gang members who aspire to work for — or perhaps one day become — a member of the Mexican Mafia, prison is an audition. Nearly all of the syndicate’s roughly 140 members are incarcerated. Inmates vying for a supporting role are evaluated on their willingness to carry out the organization’s agenda, be it attacking another prisoner, smuggling drugs, or extorting other inmates.

At Soledad State Prison, Enriquez first met a member of the Mexican Mafia. Daniel “Black Dan” Barela introduced himself by passing a note and some unfiltered Camel cigarettes from his cell to Enriquez’s with fishing line.

“This is a made guy, he’s a mobster, and I’m just this lowly kid, skinny kid, and this guy’s acknowledging me,” Enriquez said, recalling the thrill he felt.

Enriquez was transferred to San Quentin, where his dealings with the Mexican Mafia “increased exponentially,” he testified. His duties as a porter allowed him to walk throughout the prison, and he came to know the inmates in a block of cells known as “Hotel California,” where all of the prison’s Mexican Mafia members were held, he said.

Enriquez was then sent to Folsom State Prison near Sacramento, where, in 1985, he was admitted to the Mexican Mafia. He had vaulted to the peak of the prison hierarchy, joined the “crème de la crème in the criminal underworld,” as he put it. “I felt like an Olympian.”

After paroling in 1988, Enriquez seized control of the narcotics trade in Boyle Heights. One of his dealers, he said, was a woman named Cynthia Gavaldon, the sister-in-law of David Gavaldon, a Mexican Mafia member known as “Spider” who had been inducted alongside Enriquez at Folsom.

Enriquez came to believe Cynthia Gavaldon was stealing drugs and cutting what supply remained to cover it up, he told the parole board. He ordered two underlings to murder her.

“She was a participant and those are the rules at the time,” he said in court, three decades later. ”You steal from the mafia, you’re killed.”

Enriquez told the board that delegating the murder to subordinates “was an entirely cowardly act.”

“There’s no rationalization that can make my ordering her death right in any way,” he said. “It was just — it was wrong.”

Enriquez may not have deflected responsibility before the parole board, but he delivered a colder account for an audience with no say over his fate: a jury weighing whether to convict Cynthia Gavaldon’s sister-in-law on racketeering charges.

He testified that he smoothed over the murder with her brother-in-law, David Gavaldon. Years later, when they were incarcerated in the same prison, Enriquez asked Gavaldon through his cell door “if he had a problem with what happened to Cynthia,” he recalled.

“No, not at all,” Gavaldon replied, according to Enriquez, and the two grasped pinky fingers through the door. “He understands it was business and that’s all it was.”

Days after Cynthia Gavaldon was murdered, Enriquez killed David “Pelon” Gallegos, a Mexican Mafia member who had been branded a coward. After an associate injected Gallegos with a large dose of heroin, Enriquez drove him to an alley and shot him five times in the back of the head.

“I had embraced the abyss of violence,” he told the parole board.

Enriquez was convicted of murder, and in 1993, he was sent to Pelican Bay State Prison, the highest-security complex in California. From his cell, Enriquez oversaw a crew extorting drug dealers and other criminals on the streets of Artesia, Downey, Cudahy, Victorville, Lennox, Hawaiian Gardens and parts of Riverside, Norwalk, Cerritos and Boyle Heights, he testified.

But as Enriquez rose within the Mexican Mafia, he grew more afraid, he told the board. Its upper ranks are “the worst place to be,” he said. “Consider a group of individuals who have every form of personality disorder. Some have mental disorders. They’re extremely violent men who have been excluded from their homes.”

In 2002, a gang investigator monitoring his conversation with a visitor heard Enriquez say, “What would you do if I wasn’t a mobster anymore?”

Enriquez had come to see the Mexican Mafia for what it was, he told the board: a band of thieving, murdering sociopaths who were devouring one another. The investigator asked Enriquez to debrief — to turn his back on the organization and spill its secrets to the government. It was 11:20 a.m. March 22, 2002.

For the next 18 years, he would testify against his former associates and decipher their phone calls, letters, even videos of inmates communicating through hand signs during visits. He collaborated with a journalist who wrote a book about his life; he spoke at symposiums for government officials and business leaders.

Enriquez acknowledged that as a darling of law enforcement, he had replaced the validation he once basked in from criminal underlings for plaudits from agents and prosecutors. “At first, it fed my narcissism,” he told the board, describing his thinking as, “I still have, oh man, I still have some status and some power.”

Relatives of the woman whose killing he ordered, Cynthia Gavaldon, have hammered on Enriquez’s quasi-celebrity status in pleading with the parole board to keep him behind bars. It was “salt on a wound,” her daughter told the board, “to know this monster of a person wrote a book and profited off of his disgusting life of crime and murder and rape.”

In denying Enriquez his freedom, Newsom noted that a psychologist had described him as a “smooth talker” whose professed transformation “may not have been altruistic.” Newsom wrote that he wasn’t yet convinced that Enriquez’s life behind bars — unblemished by misconduct since leaving the Mexican Mafia — reflected a genuine change “in thought and conduct,” and not “merely an attempt to game the system for his needs.”