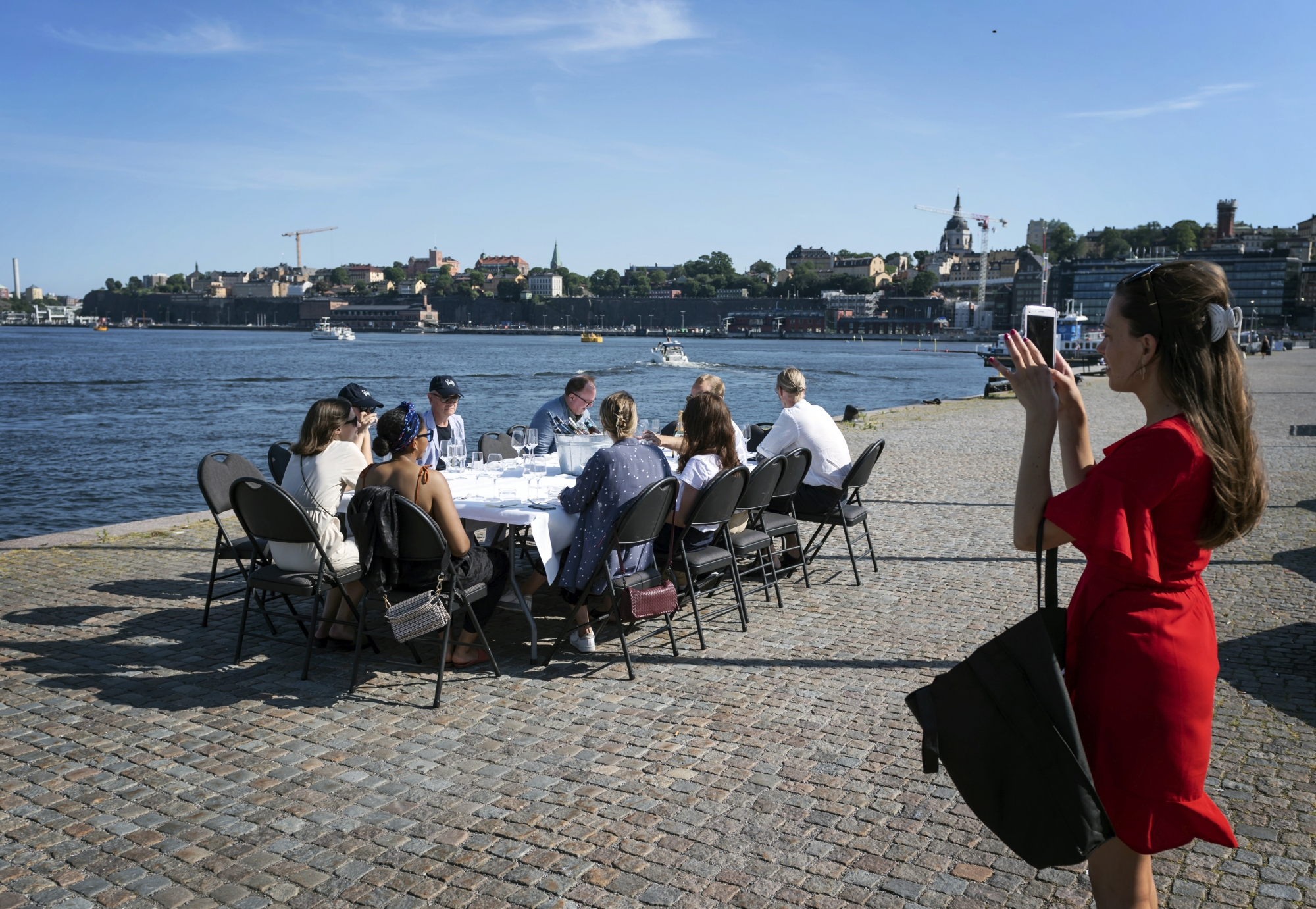 STOCKHOLM (AP) — A train pulls into the Odenplan subway station in central Stockholm, where morning commuters without masks get off or board before settling in to read their smartphones.

Whether on trains or trams, in supermarkets or shopping malls — places where face masks are commonly worn in much of the world — Swedes go about their lives without them.

When most of Europe locked down their populations early in the pandemic by closing schools, restaurants, gyms and even borders, Swedes kept enjoying many freedoms.

The relatively low-key strategy captured the world’s attention, but at the same time it coincided with a per capita death rate that was much higher than in other Nordic countries.

Now, as infection numbers surge again in much of Europe, the country of 10 million people has some of the lowest numbers of new coronavirus cases — and only 14 virus patients in intensive care.

Whether Sweden’s strategy is succeeding, however, is still very uncertain.

Its health authorities, and in particular chief epidemiologist Dr. Anders Tegnell, keep repeating a familiar warning: It’s too early to tell, and all countries are in a different phase of the pandemic.

That has not stopped a World Health Organization Europe official from saying the continent could learn broader lessons from Sweden that could help the virus battle elsewhere.

“We must recognize that Sweden, at the moment, has avoided the increase that has been seen in some of the other countries in western Europe,” WHO Europe’s senior emergency officer, Catherine Smallwood, said Thursday. “I think there are lessons for that. We will be very keen on working and hearing more from the Swedish approach.”

The way Sweden’s strategy was viewed outside the country seems to depend largely on what stage of the pandemic the observer was experiencing at the time. Initially, many abroad were incredulous at images of Swedes dining with friends in restaurants or sipping cocktails on the Stockholm waterfront. Some were envious that Swedish businesses were not forced to close.

Then came shock as the virus ripped through the country’s nursing homes and hospices.

By mid-April, more than 100 deaths were reported each day in Sweden, while mortality rates were falling elsewhere in Europe.

Today, as fears of a second wave grow across Europe, it’s fashionable to praise Sweden, with reporters from France, the U.K. and elsewhere traveling to Stockholm to ask about its success.

But a Swedish government commission investigating the handling of the pandemic will, undoubtedly, have hard questions to answer: Did authorities wait too long to limit access to nursing homes, where about half of the deaths occurred? Were they too slow to provide personal protective equipment to staff in those homes when shortcomings in the elderly care sector had long been known? Why did it take so long to set up wide-scale testing?

Tegnell also refuses to rule out a second wave of coronavirus infections in Sweden. A particular concern is the return of students to high schools for the first time since March.

“We need to be very careful and find the first sign that something is going on so that we can do as much as possible to prevent it from escalating,” he told The Associated Press.

Localized outbreaks are expected, but rather than fight them with nationwide rules, officials plan to use targeted actions based on testing, contact-tracing and isolating patients rapidly.

“It’s very important that we have quick and local response to hit down the virus without making restrictions for the whole country,” Health Minister Lena Hallengren said last week.

From the beginning, health officials argued that Sweden was pursuing a sustainable approach toward the virus that the population could adopt — for years, if necessary. “This is a marathon, not a sprint,” became a slogan repeated by ministers at every opportunity, given that neither a vaccine nor a cure yet exist.

While the rest of the world watched with envy at the freedoms that Swedes enjoyed amid lockdowns elsewhere, there were not as many as people have assumed. Gatherings were capped at 50, and congregating at bars was banned.

Most of the changes involved voluntary actions by citizens, rather than rules imposed by the government.

This trust given to the population to shoulder personal responsibility in the pandemic puts Sweden at odds with most other countries that used coercive measures such as fines to force compliance.

This is often attributed to a Swedish model of governance, where large public authorities comprised of experts develop and recommend measures that the smaller ministries are expected to follow. In other words, the people trust the experts and scientists to develop reasonable policies, and the government trusts the people to follow the guidelines.

Swedes were asked to work from home when possible and maintain a social distance, and most willingly complied. While people now ride public transportation without masks, there are also far fewer people commuting than before.

Unlike most European countries that have mandated wearing face masks in public spaces, Sweden does not recommend their broad use, and people largely follow that recommendation.

In a country the size of California with only a quarter of that state’s population of 41 million, and with low levels of transmission, most Swedes believe wearing masks makes little sense.

Carol Rosengard, 61, who runs a center for disabled youth, has seen people wear masks improperly or take them off to smoke a cigarette or drink water.

“That’s not how they should be handled,” Rosengard said, explaining her support for not imposing face mask rules on the population.

That view is echoed by Hallengren, the health minister, who doesn’t totally dismiss the effectiveness of masks and sees their usefulness in cases of severe local outbreaks. At the same time, she rejects blanket rules for the entire country.

“People will not wear masks for years,” she said.