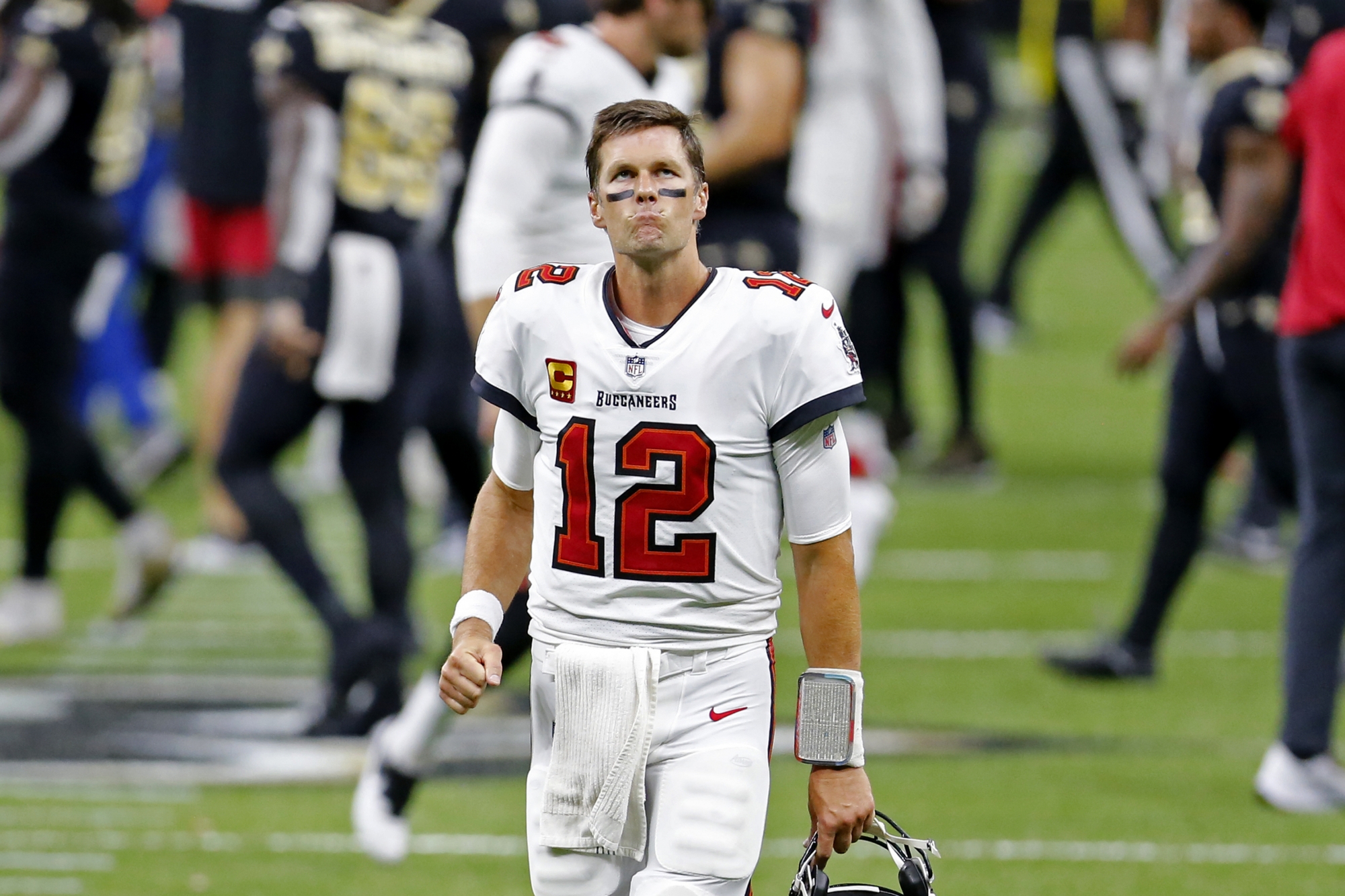 The Latest on Week 2 in the NFL (all times EDT):

New York Giants running back Saquon Barkley is out against Chicago after he hurt his right knee early in the second quarter.

The Giants said Barkley was getting X-rays and would undergo further evaluation on Monday.

Barkley went down hard on the Bears sideline after trying to fend off safety Eddie Jackson on a 6-yard carry. The 2018 NFL Offensive Rookie of the Year dragged his right leg behind him as he was helped back across the field to the Giants sideline.

After a short conversation with trainers, Barkley got on a cart and was driven into the tunnel.

Barkley also seemed to be shaken up after he was tackled at the end of an 18-yard run late in the first, but he quickly re-entered the game.

The 23-year-old Barkley struggled in New York’s season-opening loss to Pittsburgh, finishing with just 6 yards on 15 carries. He also was criticized by former Giants running back Tiki Barber for his pass-blocking skills.

Some other teams lost key players in the first half of games on Sunday.

Denver Broncos backup quarterback Jeff Driskel replaced starter Drew Lock after he injured his right shoulder on a hit from Pittsburgh Steelers linebacker Bud Dupree. Lock was scrambling when he was tripped up by Steelers linebacker T.J. Watt. Dupree then hit Lock while the quarterback stumbled, forcing Lock to fumble and sending Lock’s throwing shoulder into the Heinz Field turf.

One week after the Indianapolis Colts lost running back Marlon Mack with a season-ending ruptured Achilles tendon, second-year receiver Parris Campbell was carted off the field after appearing to injure his left knee.

Campbell was injured on the Colts second play. Vikings safety Harrison Smith made the hit and Campbell immediately reached for his knee. He missed most of his rookie season with injuries and went into the concussion protocol after an August traffic accident.

Several NFL teams stayed off the field when the national anthem was played before their Week 2 games. The New York Jets, Minnesota Vikings, Green Bay Packers, Buffalo Bills and Miami Dolphins were among the teams choosing to stay out of sight.

The San Francisco 49ers, Tennessee Titans, Philadelphia Eagles, Los Angeles Rams, Indianapolis Colts and Detroit Lions were seen by reporters during the “The Star-Spangled Banner,” and while many players stood, some took a knee or raised a fist.

Some players were kneeling during the national anthem as former San Francisco 49ers quarterback Colin Kaepernick did several years ago when he started bringing attention to social injustice.

The timing of the national anthem seemed to catch the Titans by surprised as they hustled to the sideline to line up when the song was heard. Titans linebacker Rashaan Evans, safety Kenny Vaccaro, linebacker Jadeveon Clowney took a knee and defensive lineman Jeffery Simmons held his right fist in the air.

On the other side of the 50, Titans left guard Rodger Saffold knelt with center Ben Jones with his right hand on Saffold’s back. Tennessee right guard Nate Davis took a knee as right tackle Dennis Kelly’s rested his left hand on Davis’ right shoulder.

The Colts lined up across a goal line for the playing of “Lift Every Voice and Sing.”

The Lions were heading toward the locker room before kicking off at Green Bay as the anthem started to play. That’s when about 20 of Lions turned around and faced the flag from where they were positioned at the end zone. Several Detroit players were kneeling while other teammates stood.

The Chicago Bears had “END RACISM” cut into the white line under the goal posts behind one end zone and “IT TAKES ALL OF US” in the same spot at the other end at Soldier Field.

San Francisco 49ers defensive end Nick Bosa was carted off the field with what appears to be a left leg injury.

Bosa, the reigning AP NFL Defensive Rookie of the Year, had his left leg bent behind him at the end of a 4-yard run by Frank Gore with 6:22 left in the first quarter against the New York Jets.

Bosa stayed on one knee for several moments before lying on his back and being checked by trainers. He was helped onto the cart and driven to the locker room.

Two plays later, 49ers defensive tackle Solomon Thomas needed to be carted off with what appeared to be a left leg or knee injury after an 8-yard reception by Chris Hogan.

Bosa and Thomas were ruled out for the rest of the game.

Dallas Cowboys defensive tackle Dontari Poe kneeled again during the national anthem before playing for a team owner who has been against it.

Last week, Poe became the first Cowboys to take a knee during the anthem. Team owner Jerry Jones has been among the most outspoken against kneeling during “The Star-Spangled Banner,” to protest racial inequality and police brutality.

Jones softened his stance amid the social unrest sparked by the death of George Floyd at the hands of Minneapolis police in the spring.

There wasn’t any noticeable reaction from the socially distanced crowd at AT&T Stadium. The Cowboys haven’t given any specifics on the expected size of the crowd in the 80,000-seat venue. Texas allows capacity up to 50% for sports venues.

Several Cowboys and Atlanta Falcons appeared to be unaware that the anthem had started and scrambled into position. Several Dallas players were in the end zone kneeling in prayer when they realized the anthem was playing.

As soon as Poe realized it was playing, he knelt. Cowboys safety Donovan Wilson and linebacker Justin March had their hands on Poe’s shoulders during the anthem. His teammates made a similar show of support in the opener against the Los Angeles Rams last week.

Before other games across the league Sunday afternoon, some players and teams stayed off the field during the national anthem while some players took a knee or stood with a fist raised such as San Francisco 49ers wide receiver Kendrick Bourne.

Indianapolis Colts coach Frank Reich went down on one knee as his players lined the sideline.

Tom Brady is making his home debut with the Tampa Bay Buccaneers against the Carolina Panthers. The six-time Super Bowl champion and his new team hope Sunday is more enjoyable than Week 1.

Brady struggled in an 11-point loss to New Orleans in his first NFL game not in a New England Patriots uniform.

The Panthers are also hoping to bounce back from a season-opening loss in Matt Rhule’s first game as their coach. Rhule faced a lot of questions about not giving Christian McCaffrey the ball on fourth-and-1 after the All-Pro running back scored two touchdowns against the Las Vegas Raiders.

The 2020 NFL season kicked off last week, ending a long offseason in which there were questions about how the league would function during the coronavirus pandemic. Players and coaches have been tested daily for COVID-19, the disease caused by the novel coronavirus.