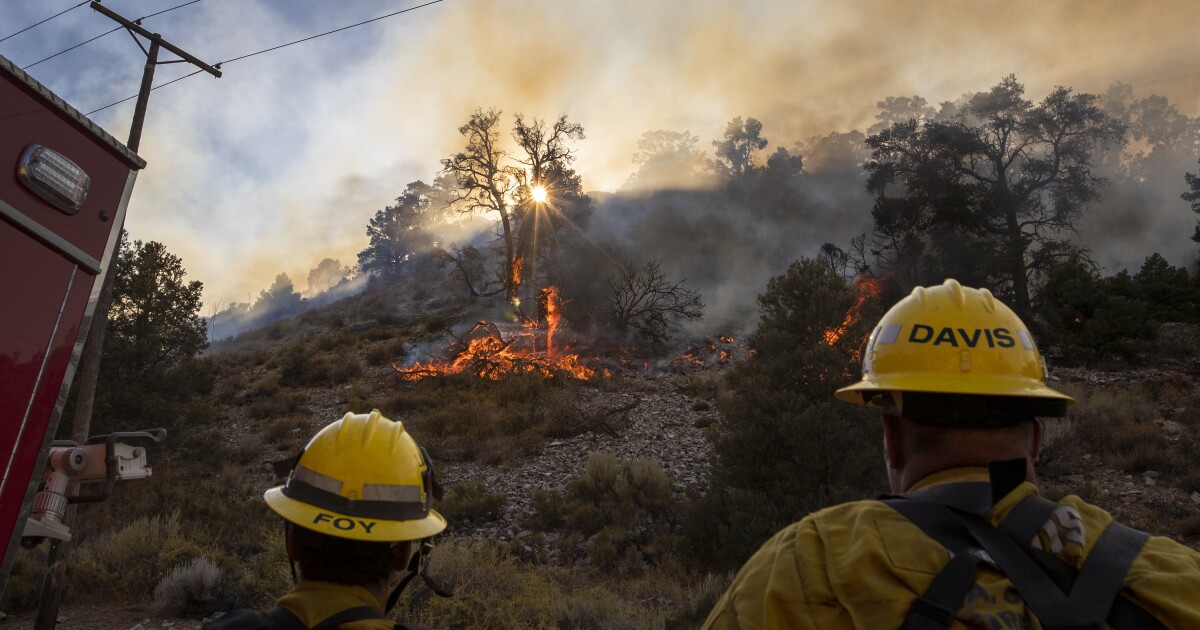 Fire weather on Monday is threatening portions of the Antelope Valley, where the massive Bobcat fire continues to loom large after forcing evacuations and charring multiple homes.

Heat, dryness and winds will contribute to the critical conditions, the National Weather Service said, creating the “potential for rapid growth and extreme fire behavior.”

“Out by the Bobcat fire, it’s still fairly warm and dry, and there will be afternoon and evening gusts of winds,” meteorologist David Sweet said from the weather service’s station in Oxnard. “And that’s the concern right there: dryness and gusty winds.”

Isolated wind gusts could reach as high as 40 mph, Sweet said. The winds will likely continue for the rest of the week.

The Bobcat fire, which ignited Sept. 6, has grown to more than 105,000 acres — one of the county’s largest blazes ever — and remains at 15% containment, according to the U.S. Forest Service.

Residents in the Juniper Hills area of the Antelope Valley anxiously awaited updates on their homes after evacuation orders last week.

“We kept watching the fire maps closely, and we knew that it was in our area,” said Juniper Hills resident Bridget Lensing, who evacuated her family’s home Thursday. “We were hoping and praying somehow our home would be spared.”

Lensing’s parents bought their Cima Mesa home in the 1980s, and both she and her brother were raised there. She said that her family rushed to spray the whole property with water before evacuating, and that they spent an “agonizing” 48 hours away from the area before returning to find much of their neighborhood destroyed.

“All the homes on our street were gone,” Lensing said. “Everything was dust beside the chimneys.”

Lensing’s house was the only one on the street to survive, she said, although it was apparent that flames had swept through the property. Her closest neighbor’s home of 50 years burned in the blaze.

“We feel so, so sorry for them,” she said. “But they want to rebuild. … Juniper Hills is so strong.”

Fire officials said the priority for Monday will be the continued protection of those northern foothill communities, as well as the suppression of fire activity at Mt. Wilson, where flames have threatened communications towers and the iconic observatory since Tuesday.

For weeks, firefighters have been hindered by steep, rocky terrain within the Angeles National Forest, which made it difficult for large mechanical equipment to reach several front lines of the blaze.

Grasses, sage and brush are contributing to the fire’s movement through the valley, Smith said, but he noted that the flatter terrain is allowing for more mechanized equipment, such as bulldozers, to create containment lines.

A total of 4,000 people have been evacuated and 6,000 structures are threatened by the blaze, he said.

The following areas are under evacuation warnings:

Air quality continues to suffer because of the fire. Officials issued a smoke advisory for a swath of Southern California through Monday afternoon.

While forecasts show good or moderate air quality is expected for much of the Southland throughout the day, pollutants could reach levels considered unhealthy for sensitive groups and individuals in the eastern San Gabriel Valley, areas in and around the San Gabriel Mountains and parts of the Inland Empire.

Given the forecast, Los Angeles County health officials are urging residents with heart disease, asthma or other respiratory diseases to minimize their time outdoors.

As of Monday, roughly 1,700 personnel have been assigned to the Bobcat fire, Smith said, including several firefighters who have arrived from across the country to battle the insatiable blaze.

“Is there a fatigue level? Absolutely,” Smith said, “but firefighters are always optimistic. I never go into a fight with the intent to lose.”