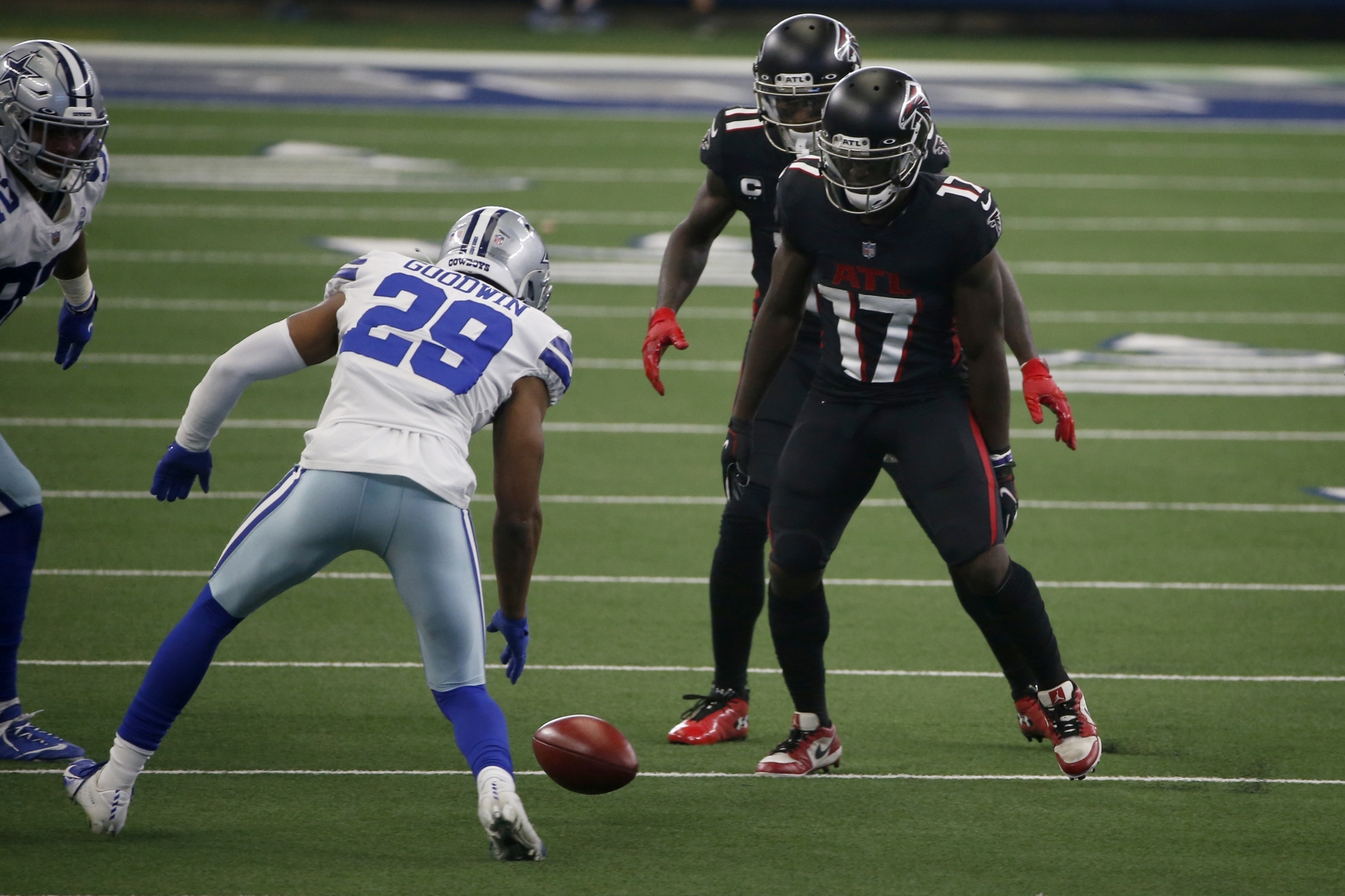 The Falcons were still up 12 in the fourth quarter when Dak Prescott became the first quarterback in NFL history to pass for more than 400 yards and rush for three touchdowns in the same game, getting the Cowboys (1-1) within two.

Matt Ryan threw four touchdown passes, two off lost fumbles from the Cowboys, on the way to a 20-0 lead in the first quarter. But the Falcons couldn’t avoid their first 0-2 start under coach Dan Quinn in a performance reminiscent of their blown 28-3 lead in a Super Bowl loss to New England in Houston.

The successful onside kick for Dallas came after two failed fake punts and a gamble from McCarthy in going for the 2-point conversion.

EAST RUTHERFORD, N.J. (AP) — Raheem Mostert ran for an 80-yard touchdown on San Francisco’s first play from scrimmage and Jimmy Garoppolo threw two TD passes — before both players sat out the second half with injuries.

It was a costly victory for San Francisco, which was already short-handed before losing Garoppolo to an ankle injury and Mostert to an injured knee. Defensive end Nick Bosa and defensive tackle Solomon Thomas were both carted off the field two plays apart with left knee injuries in the first quarter.

It didn’t matter against the Jets (0-2), who have also been hit hard by injuries and couldn’t muster much.

GREEN BAY, Wis. (AP) — Aaron Jones rushed for a career-high 168 yards and scored three touchdowns, including a 75-yard breakaway. Jones also had a team-high 68 yards receiving on four catches as the Packers (2-0) won their home opener for an eighth consecutive year. Jones had a 14-yard touchdown run and a 7-yard touchdown catch to go along with his 75-yarder.

Jones’ 75-yard burst was the longest touchdown run by a Packer since Ahman Green had a 90-yarder against Dallas in 2004.

Aaron Rodgers was 18 of 30 for 240 yards with touchdown passes to Jones and Robert Tonyan.

One week after blowing a 17-point, fourth-quarter lead in a 27-23 loss to the Chicago Bears, the Lions (0-2) allowed an 11-point advantage to vanish by halftime as they fell for the 11th consecutive time.

TAMPA, Fla. (AP) — Tom Brady got his first win with the Buccaneers, throwing for 217 yards, one touchdown and an interception.

With another recent acquisition, Leonard Fournette, rushing for 103 yards and two TDs, Brady rebounded from a less-than-stellar debut for his new team to avoid starting a season with consecutive losses for the first time in a 21-year career.

Brady tossed a 23-yard TD pass to Mike Evans in the first quarter. Fournette scored on runs of 1 and 46 yards, the latter coming after Carolina stormed back from a 21-0 halftime deficit to 24-17 on a pair of TD runs by Christian McCaffrey and Joey Slye’s 23-yard field goal.

Brady completed 23 of 35 passes, and Evans finished with seven receptions for 104 yards. Fournette averaged 8.6 yards per carry on 12 rushing attempts.

Teddy Bridgewater was 33 of 42 for 367 yards and two interceptions for the Panthers (0-2), who had four turnovers.

McCaffrey spent most of the fourth quarter on the sideline with an apparent ankle injury.

MIAMI GARDENS, Fla (AP ) — Josh Allen threw for 417 yards and four touchdowns, both career highs. Allen reached a career high in yards passing for the second week in a row, and became the first Buffalo quarterback to have back-to-back 300-yard games since Drew Bledsoe in 2002.

The Dolphins (0-2) closed to 31-28 on an 8-yard touchdown pass from Ryan Fitzpatrick to Mike Gesicki and a successful 2-point conversion with 49 seconds left. The onside kick was recovered by the Bills’ Micah Hyde.

Masked fans were scattered throughout the stadium, and the announced crowd of 11,075 was smaller than the maximum of 13,000 being allowed to attend the home opener. Almost half of the spectators wore Bills colors.

NASHVILLE, Tenn. (AP) — Stephen Gostkowski kicked a 49-yard field goal with 1:36 left. Gostkowski, who hit the left upright on an extra point, also made a 51-yarder at the end of the first half after an ugly performance in the opener.

Jeffery Simmons batted a pass by Gardner Minshew, and Harold Landry III grabbed the ball out of the air with 47 seconds left to seal the victory.

This is the Titans’ first 2-0 start since 2008, the most recent season this franchise won the AFC South. The Titans also won their seventh straight against division rival Jacksonville (1-1) in Nashville after nearly blowing a 24-10 halftime lead.

Ryan Tannehill threw for 239 yards and four touchdowns. The Titans sacked Minshew twice and picked him off twice.

PHILADELPHIA (AP) — Jared Goff threw three touchdown passes to Tyler Higbee. Goff completed his first 13 passes, including a pair of TDs to Higbee, and the Rams jumped to a 21-3 lead minutes into the second quarter.

After the Eagles (0-2) pulled within one score, Goff’s 28-yard TD pass to Higbee in the fourth period iced it for Los Angeles (2-0).

Goff and Carson Wentz were selected Nos. 1-2 in the 2016 draft, one of seven times since 1967 that quarterbacks were the first two picks. In their only other head-to-head meeting in December 2017, Wentz tore two knee ligaments. Nick Foles stepped in and eventually led Philadelphia to its first Super Bowl title.

PITTSBURGH (AP) —Ben Roethlisberger threw for 311 yards with two touchdowns and an interception and the Steelers fended off a spirited comeback by Denver.

The Steelers (2-0) knocked out Denver starting quarterback Drew Lock in the first quarter with a right shoulder injury. They didn’t secure the win until safety Terrell Edmunds sacked Broncos backup Jeff Driskel on fourth-and-2 with less than two minutes to go.

Driskel completed 18 of 34 for 256 yards with two touchdowns and a pick, and absorbed a serious pounding at the hands of Pittsburgh’s defense. The Steelers had seven sacks in all — six of them on Driskel — and were credited with 19 quarterback hits.

Still, Denver (0-2) had a chance when Driskel hit Noah Fant for a 22-yard gain that gave the Broncos a first down at the Pittsburgh 23. Three plays gained 8 yards. Facing a potentially staggering upset, the Steelers escaped when Edmunds raced in untouched to drop Driskel. A 59-yard sprint by Pittsburgh’s James Conner allowed the Steelers to run out the clock.

INDIANAPOLIS (AP) — Jonathan Taylor, a 21-year-old rookie running back, rushed 26 times for 101 yards and scored a touchdown in his first NFL start. Taylor celebrated his first win inside Lucas Oil Stadium, after losing three Big Ten championship games with Wisconsin in the stadium, in front of about 2,500 fans. He became the first Colts rookie in eight years to top the 100-yard mark, and it helped Philip Rivers win his first game with Indy (1-1).

Taylor wasn’t Indy’s only impressive rookie. Michael Pittman Jr. caught four passes for 37 yards, Julian Blackmon tipped the ball to Khari Willis for an interception, and Rodrigo Blankenship made all four of his field-goal attempts.

The Colts had a nearly 17-minute edge in time of possession, too, as they improved to 12-0 all-time against the Vikings (0-2) in home games.

It was another ugly day for Minnesota. Kirk Cousins had a 0.0 passer rating late into the third quarter, thanks in part to drops, one of which sailed through the hands of Bisi Johnson and into the arms of Colts cornerback Kenny Moore II.

CHICAGO (AP) — Mitchell Trubisky threw two touchdown passes and the Bears hung on against the banged-up Giants 17-13. The Bears (2-0) grabbed a 17-0 halftime lead and withstood a big push a week after rallying from 17 down at Detroit for their first season-opening win in seven years.

The Giants (0-2) refused to go quietly even though they lost star running back Saquon Barkley to a right knee injury on the opening play of the second quarter.

New York’s Dion Lewis made it a seven-point game when he plowed in from the 1 in the opening minute of the fourth quarter. James Bradberry then intercepted Trubisky when he ripped the ball out of Allen Robinson’s hands, leading to a 37-yard field goal by Graham Gano that cut it to 17-13 with 7:43 remaining.

The Giants drove to the 10 before Golden Tate got flagged for pushing off against Eddie Jackson near the goal line on an incomplete pass as time expired.