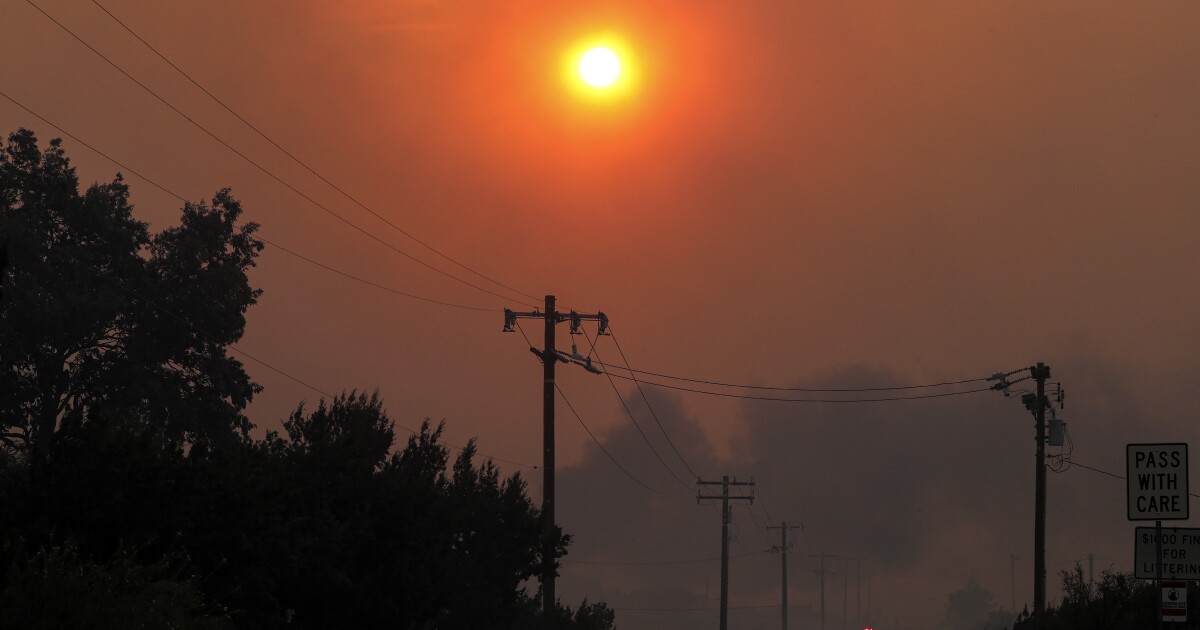 Swirling smoke from California’s historic firestorm is still clogging some of the state’s skies — leading to unhealthy air quality in and around the Sierra Nevada.

Conditions at one point were considered hazardous Monday morning in the area of Mammoth Lakes, meaning “everyone should stay indoors and reduce activity levels,” according to air quality monitors.

However, the air later cleared to a point where it was only “very unhealthy,” with residents urged to avoid strenuous outdoor activities.

That part of California has been subjected to particularly foul air quality.

Some areas around Bishop and Mammoth Lakes were listed as “beyond index” last week — with air quality measurements that reached 626, far beyond the 0-500 scale.

The town lies northeast of where the Creek fire is burning. That destructive blaze has chewed through more than 278,000 acres and is now 27% contained, according to fire officials.

Other areas of the state — including Quincy in Plumas County and Paradise in the Sierra Nevada foothills — were seeing very unhealthy air quality Monday morning.

Both towns are nestled near the burn area of the North Complex fire, one of the largest and deadliest in state history. That blaze has scorched more than 294,000 acres and is now 64% contained.

Officials have also issued a smoke advisory for a swath of Southern California through Monday afternoon.

While forecasts show good or moderate air quality is expected for much of the Southland throughout the day, pollutants could reach levels considered unhealthy for sensitive groups and individuals in the San Gabriel Valley, Pomona Valley, areas in and around the San Gabriel Mountains and parts of the Inland Empire.

Given the forecast, Los Angeles County health officials are urging residents with heart disease, asthma or other respiratory diseases to minimize their time outdoors. However, they stressed that everyone should be cognizant of the potential risks posed by unhealthy air and take steps to avoid prolonged or unnecessary exposure.

“It is difficult to tell where smoke, ash or soot from a fire will go, or how winds will affect the level of these particles in the air, so we ask everyone to remember that smoke and ash can be harmful to health, even for people who are healthy,” the county‘s health officer, Dr. Muntu Davis, said in a statement Monday.

“If you can see smoke, soot or ash, or you can smell smoke, pay attention to your immediate environment and take precautions to safeguard your health.”

He added that the county is “advising day camps that are in session in smoke-impacted areas to suspend outside recreational activities, such as hiking or picnics, until conditions improve.”

The smoke advisory was triggered by a trio of still-burning blazes in Southern California: the Bobcat, El Dorado and Snow fires.

At more than 105,000 acres, the biggest by far is the Bobcat fire. That blaze, which is now 15% contained, has carved a path through the Angeles National Forest from the foothills above Monrovia to the Antelope Valley.

The Snow fire ignited last week in the Snow Creek community west of Palm Springs. It has burned roughly 6,000 acres and is 38% contained.

Crews are now reporting 59% containment on the El Dorado fire, which has scorched more than 22,000 acres in and around the San Bernardino National Forest near Yucaipa.

Plumes from the Snow fire would be blown northeast into the Coachella Valley and eastern Riverside County.