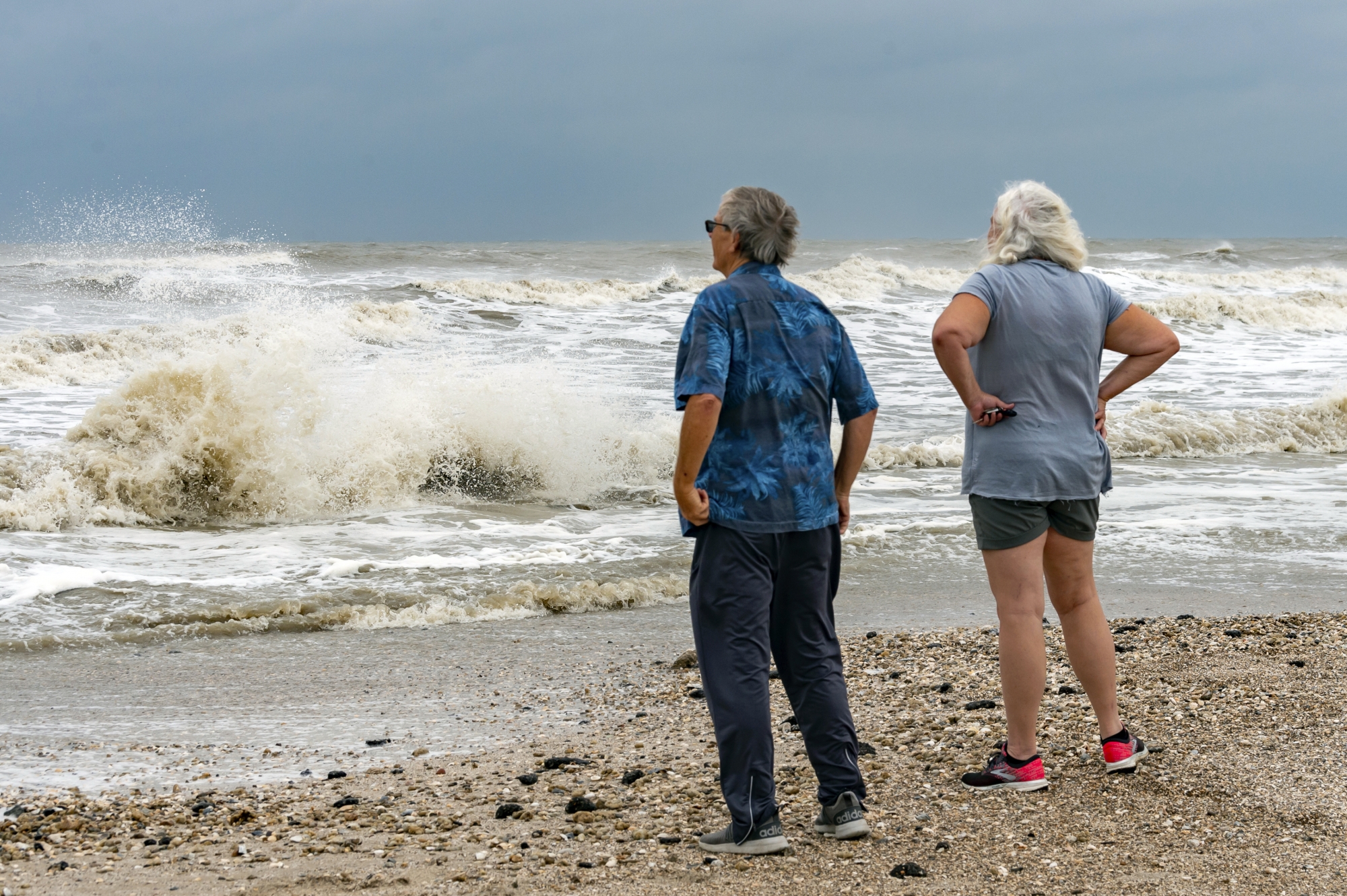 HOUSTON (AP) — Tropical storm conditions were expected to begin Monday morning in parts of Texas and Louisiana as Tropical Storm Beta slowly worked its way into a part of the country that’s already been drenched and battered during this year’s exceptionally busy hurricane season.

No longer expected to gain hurricane strength, forecasters also decreased expected rainfall totals from Beta early Monday, saying in a U.S. National Hurricane Center advisory that up to 15 inches (38 centimeters) of rain could fall in some areas. That’s down from earlier predictions of up to 20 inches (51 centimeters).

Beta increased speed Sunday afternoon and was set to make landfall along Texas’ central or upper Gulf Coast late Monday night, forecasters said. It was then expected to move northeastward along the coast and head into Louisiana sometime mid-week, with rainfall as its biggest threat.

Forecasters said Beta was not expected to bring the same amount of rainfall that Texas experienced during either Hurricane Harvey in 2017 or Tropical Storm Imelda last year. Harvey dumped more than 50 inches (127 centimeters) of rain on Houston and caused $125 billion in damage in Texas. Imelda, which hit Southeast Texas, was one of the wettest cyclones on record.

The first rain bands from Beta reached the Texas coast on Sunday, but the heaviest rain wasn’t expected to arrive until Monday into Tuesday.

In low-lying Galveston, which has seen more than its share of tropical weather over the years, officials didn’t expect to issue a mandatory evacuation order but they advised people to have supplies ready in case they have to stay home for several days if roads are flooded.

Kitcheo, whose home is 18 feet (5.5 meters) above the ground on stilts, said she expected her street to be impassable as water from rising tides was already flooding neighboring roadways on Sunday.

“This has definitely been more stressful, this hurricane season,” she said.

Galveston, which has about 50,000 residents, was the site of the deadliest hurricane in U.S. history, a 1900 storm that killed an estimated 6,000 people. The city was also hit hard in 2008 by Hurricane Ike, which caused about $30 billion in damage. Kitcheo’s previous home was heavily damaged during Ike and had to be torn down.

Beta was churning slowly through the Gulf of Mexico early Monday about 115 miles (190 kilometers) south of Galveston, the U.S. National Hurricane Center said. The storm had maximum sustained winds of 60 mph (95 kph) and was moving west-northwest at 6 mph (10 kph).

Houston Mayor Sylvester Turner on Sunday said while Beta was not expected to bring rain like Harvey, he cautioned residents to “be weather alert.”

“Be weather aware because things can change. This is 2020 and so we have to expect the unexpected,” said Turner, adding the city expected to activate its emergency center on Monday.

In Victoria County, about 120 miles (193 kilometers) southwest of Houston, officials asked residents to prepare for up to 10 to 15 inches (25 to 38 centimeters) of rain.

“As with any event, panic is never helpful or necessary, but preparation is, and now is the time to finalize those plans,” said County Judge Ben Zeller, the top elected official in Victoria County.

Beta is forecast to dump heavy rain on the southwestern corner of Louisiana three weeks after the same area got pounded by Hurricane Laura. More than 41,000 homes and businesses remain without electricity, and Beta could add to that figure by toppling trees that were left leaning by the previous storm, said meteorologist Donald Jones of the National Weather Service office in Lake Charles, Louisiana. Storm debris from Laura clogging draining ditches in hard-hit areas such as Lake Charles could increase the threat of flooding.

Beta was one of three named storms whirling in the Atlantic basin during an exceptionally busy hurricane season. If the system makes landfall in Texas, it would be the ninth named storm to make landfall in the continental U.S. in 2020. That would tie a record set in 1916, according to Colorado State hurricane researcher Phil Klotzbach.

Forecasters ran out of traditional storm names on Friday, forcing the use of the Greek alphabet for only the second time since the 1950s.

A stretch of the Gulf Coast from Port Aransas, Texas, about 165 miles (265 kilometers) southwest of Galveston, to Morgan City, Louisiana, 80 miles (128 kilometers) west of New Orleans, was under a tropical storm warning Monday.

Meanwhile, Teddy remained a powerful hurricane on Monday, with maximum sustained winds of 105 mph (165 kph) and moving north at 6 mph (9 kph). Teddy was centered 195 miles (315 kilometers) south-southeast of Bermuda less than a week after Hurricane Paulette made landfall in the wealthy British territory. A tropical storm warning was in effect for Bermuda.

Wilfred, which had been a tropical storm, weakened to a trough of low pressure late Sunday.

Parts of the Alabama coast and Florida Panhandle were still reeling from the effects of Hurricane Sally, which roared ashore on Wednesday. At least two deaths were blamed on the system.