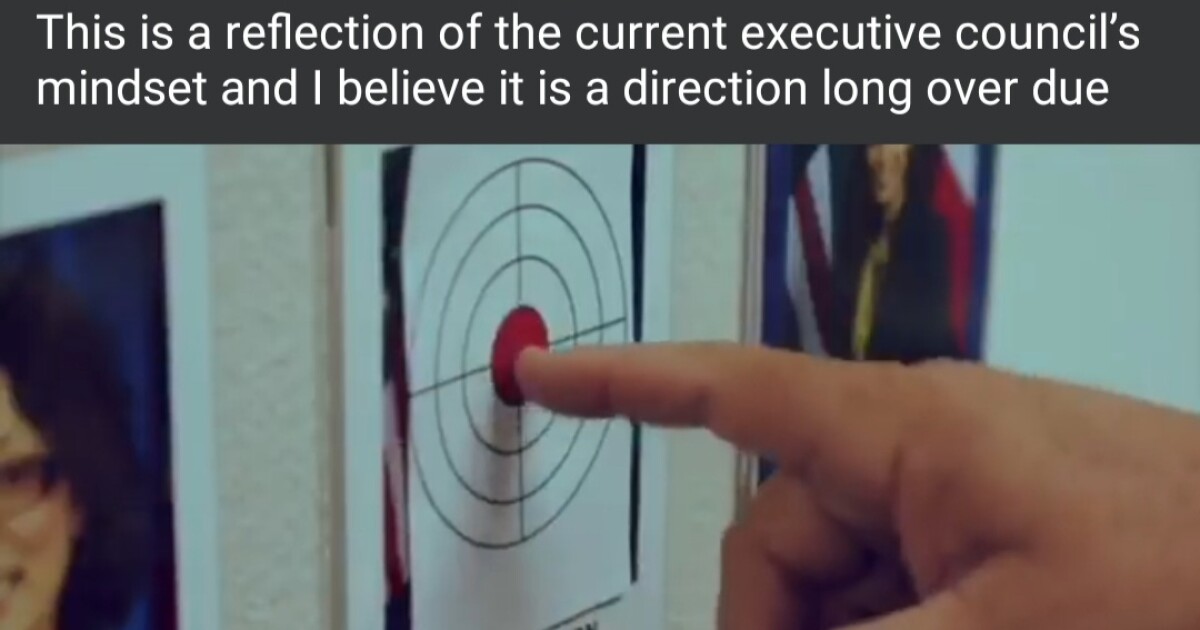 The union representing California prison guards posted pictures and video online of a new political ad announcing its intent to “target” South Los Angeles Assemblyman Reggie Jones-Sawyer, obscuring the Black lawmaker’s face with a bull’s-eye — and drawing criticism that the image amounted to a threat.

The ad and a screenshot posted Wednesday by California Correctional Peace Officers Assn. President Glen Stailey were later removed, but pictures and copies of the video continue to circulate online.

The incident highlights mounting acrimony in Los Angeles and across the country between law enforcement and those who seek police reforms, and it comes days after two Los Angeles County sheriff’s deputies were ambushed by a gunman, leading Sheriff Alex Villanueva to warn that “words have consequences.”

Jones-Sawyer, chairman of the state Assembly’s Public Safety Committee, said Thursday he is concerned that regardless of the organization’s intent, the online image could lead to real-world violence.

“God forbid someone took that putting a target on me literally and were not stable and showed up at my home,” he said. “In this environment … you don’t put a target on a person of color.”

Jones-Sawyer — who condemned Saturday night’s shooting of the two deputies, calling it a “cowardly act” — has long been a champion of criminal justice reform. He also recently voted in a favor of a new contract for CCPOA members that cuts their pay because of the state’s economic crisis while providing additional paid time off each month.

The assemblyman is in a tight reelection race in the 59th District against fellow Democrat Efren Martinez, a public policy commissioner.

The CCPOA has long been a strong lobbying presence at the state Capitol and in campaigns and has given hundreds of thousands of dollars to dozens of legislators in recent years through independent expenditure committees. It has contributed $143,000 so far to Martinez’s campaign through those channels, according to state records.

Martinez said he does not condone “hateful tactics” and alleged his campaign had been the target of negative actions as well, including an incident in which he said a window was broken at his office.

The union did not respond to a request for comment but sent a statement through a public relations agency.

“It would require a great stretch of the imagination to believe that we meant anything other than our clear intent, which was to demonstrate that we are mounting political campaigns against certain legislators,” read the statement, which was attributed to Stailey. “However, to put this controversy to rest, we are removing the video from our official channels and editing it. We will not be deterred from our commitment to protect the interests of correctional officers by actively participating in political campaigns.”

In the nearly 2½-minute ad, a narrator says that it is the “first day of a new direction for our association” and that it will “further our commitment to the legislators who aren’t afraid to stand with law enforcement.”

The political advertisement includes images of a woman being held against a wall by a man with a knife, a person standing on top of a car while smashing its windows with a baseball bat, and a burning home — while interspersing narrative about rising violence for law enforcement and communities.

“We are going to demand that the increased violence and assaults on police officers are addressed,” the narrator says.

The video continues with Stailey pointing to the bull’s-eye on the photo of Jones-Sawyer while the narrator says, “and the perpetrators are held accountable to the highest degree.”

“A target over a person’s face is something we all recognize,” he said.

Rendon said the union represents state workers with issues before the Legislature that lawmakers will continue to take seriously. But he said the ad makes him question the association’s leadership.

Jones-Sawyer said at first he questioned whether the video was real, but when he determined it was, he called Capitol security services for more protection for his family.

Jones-Sawyer is married and has a college-age son at home, he said. He also sent a letter to state Atty. Gen. Xavier Becerra asking whether the video crossed legal lines and amounted to a threat against a public official.

A representative for Becerra’s office said Thursday that he was “aware of the request” but declined to say whether an investigation would take place.

Ed Obayashi, an attorney and Plumas County sheriff’s deputy who advises agencies on legal matters, said that political speech was one of the “highest forms of protected free speech” and that he did not believe the ad crossed legal lines.

Obayashi said that although he found the bull’s-eye image “highly problematic,” he believed that it probably resonated with the group’s membership. He said recent attacks on officers have left many in law enforcement angry and frustrated by police reform measures in California that many rank-and-file officers view as anti-police.

“The organization would not have put this ad out if that was not the sentiment of the general membership,” Obayashi said. “It has come to that point and beyond.”