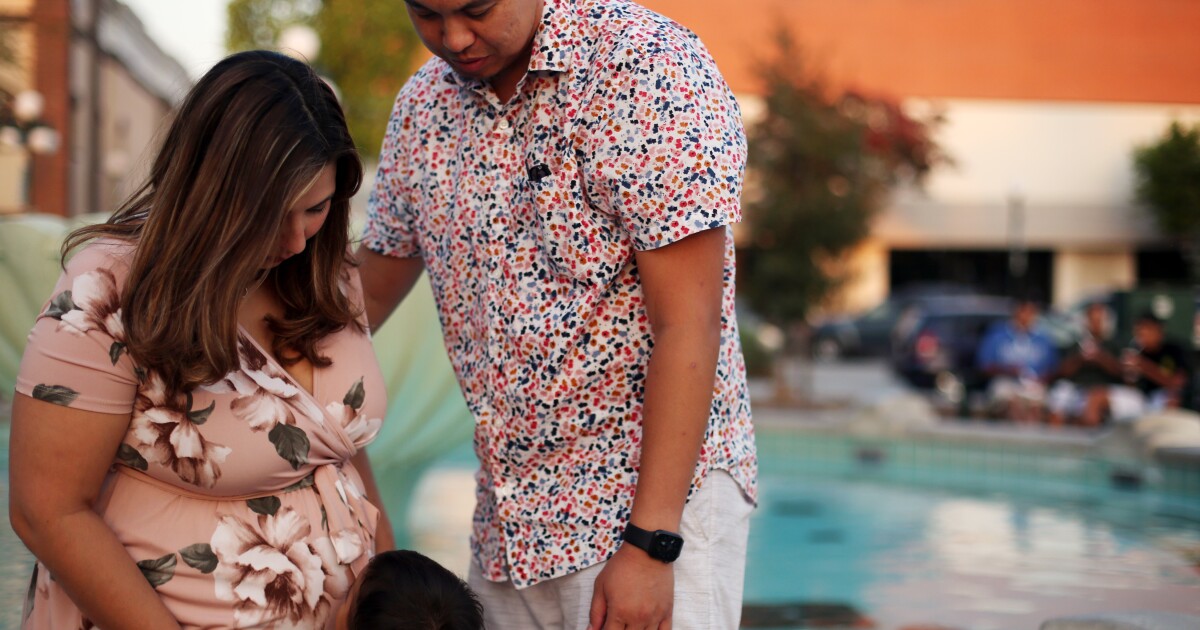 Like many expectant parents, Kevin and Stephanie Zapata have been calculating how much time they can afford to take off work for the birth of their second child in late December.

But the Monrovia couple said one aspect of their calculation became easier after Gov. Gavin Newsom signed a bill Thursday giving millions of California workers at smaller businesses job protections that will allow them to take time off to bond with a new child or care for a sick family member.

“This is critical for us,” Kevin Zapata said.

Senate Bill 1383 by state Sen. Hannah-Beth Jackson (D-Santa Barbara) requires employers with five or more workers to offer 12 weeks of unpaid time off for family leave beginning Jan. 1. Currently, companies with 50 or more employees are required to provide 12 weeks of leave to care for a new child or a family member. The threshold for parental leave is lower, allowing 12 weeks of job-protected time off for workers at companies with 20 or more employees.

Jackson said extending critical job protections to workers will remove a key hurdle that has kept them from applying for the state’s paid family leave benefits. California workers automatically pay into the family leave program, which provides them with eight weeks of partial pay between 60% to 70% of their weekly salary. However, many employees are unaware of the benefit or say they worry they wouldn’t have a job to return to if they took the time off.

“The COVID-19 pandemic has only further revealed the need for a family leave policy that truly serves families and workers, especially those who keep our economy running,” Newsom said in a written statement on Thursday.

Jackson, who is termed out, said increasing access to paid family leave is critical to ensuring working parents can care for new babies and sick loved ones.

New parents cited lack of job protection as a key reason they declined to take paid family leave when needed, according to a 2018 survey by the California Employment Development Department, which administers the program. Low-wage workers, who are more likely to work for smaller employers, were less likely to apply for paid family leave.

Of the 6.8 million workers in the state who earned less than $20,000 in 2018 and paid into the program, less than 46,000 used paid family leave, according to a legislative analysis of the bill.

“Equitable family leave is critical to ensuring equality for women in the workplace, a strong start for children, the health and safety of our older Californians and for ensuring fathers are full participants in their children’s lives,” Jackson said in a written statement on Thursday.

California became the first state in the nation in 2004 to create a paid family leave program. But Jackson said California has since fallen behind other states in expanding access and benefits in the employee-funded program to better help working families. In July, the state increased the length of time a person can qualify for paid family leave from six weeks to eight weeks. In 2016, lawmakers raised the wage replacement from 55% to 60-70% depending on a person’s average weekly wage. Lawmakers lowered the threshold for job protections for parental leave from 50 employees to 20 employees in 2018.

Supporters of the law said despite previous changes, 40% of California workers did not have job protections because their employers’ businesses were too small.

Many of the efforts to expand family leave have faced significant opposition from business groups, including the newly signed SB 1383. Republicans voting against the bill said it was reckless to place mandates on businesses during the COVID-19-induced economic crisis. The California Chamber of Commerce included SB 1383 on its annual “job killer” list that highlights laws corporate interests say will hurt employment and the economy.

“This bill will sound a death knell for even more small businesses across California,” Assemblyman Kevin Kiley (R-Rocklin) said prior to the bill passing the Legislature on Aug. 31.

Jackson introduced SB 1383 in March, which went on to pass the Senate three months later with the bare minimum votes required. It then slowly moved through the Assembly before again garnering the bare minimum number of votes needed to pass on Aug. 31, just minutes before the legislative deadline.

The new law that takes effect on Jan. 1 will also require employers to grant spouses who work for the same company with 12 weeks of family leave each, instead of allowing companies to require parents to split the time off.

SB 1383 also requires companies with five or more employees to maintain employer-paid health benefits for any employee who takes leave to care for a newborn, a seriously ill loved one or themselves.

For the Zapata family, the protections added are welcome for the impending arrival of their “quarantine baby.” Stephanie Zapata said the new job protections will alleviate the uncertainty around how much time her husband will be able to take off from work to help her when their baby girl is born.

“This helps us pay our bills and take care of our family,” she said. “I’m so grateful for this new law. We will know for sure his job is protected.”