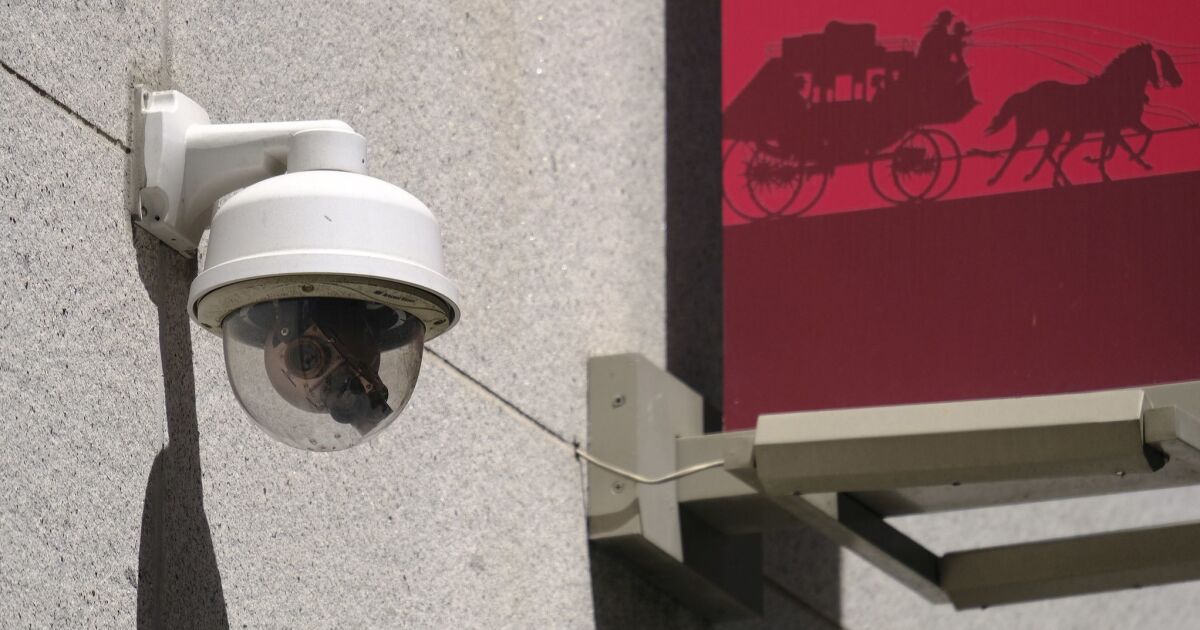 The Los Angeles Police Department has used facial recognition software nearly 30,000 times since 2009, with hundreds of officers running images of suspects from surveillance cameras and other sources against a massive database of mug shots taken by law enforcement.

The new figures, released to The Times, reveal for the first time how commonly facial recognition is used in the department, which for years has provided vague and contradictory information about how and whether it uses the technology.

The LAPD has consistently denied having records related to facial recognition, and at times denied using the technology at all.

The truth is that, while it does not have its own facial recognition platform, LAPD personnel have access to facial recognition software through a regional database maintained by the Los Angeles County Sheriff’s Department. And between Nov. 6, 2009, and Sept. 11 of this year, LAPD officers used the system’s software 29,817 times.

More than 300 LAPD personnel have access to the software.

Josh Rubenstein, an LAPD spokesman, said he could not determine how many leads from the system have developed into arrests, but that the technology has helped identify suspects in gang crimes where witnesses were too fearful to come forward and in crimes where no witnesses existed.

He said it has helped officers solve crimes faster than they otherwise would, and confirmed that it was recently used by the Safe LA Task Force — a coalition of law enforcement agencies investigating arsons, burglaries and other crimes that occurred during protests in the city this summer.

Records reviewed by The Times also indicate that LAPD officers arrested a man in June on suspicion of sexually assaulting minors after identifying him with the help of facial recognition.

LAPD Assistant Chief Horace Frank said “it is no secret” that the LAPD uses facial recognition, that he personally testified to that fact before the Police Commission a couple years ago, and that the more recent denials — including two since last year, one to The Times — were just mistakes.

“We aren’t trying to hide anything,” he said.

Civil liberties advocates disagree. They said the recent denials — only corrected after The Times questioned their accuracy — are part of a long pattern of deception in which the LAPD has systematically avoided discussing facial recognition by denying it has records related to the technology or by claiming, erroneously, that it doesn’t use it.

As such technology improves and becomes more pervasive, transparency around the government’s use of it becomes all the more important — and the LAPD’s actions all the more concerning — given the potential for privacy and civil rights infringements, advocates say.

Mohammad Tajsar, a senior staff attorney at the ACLU of Southern California, said the ACLU was aware that the LAPD had access to the Los Angeles County Regional Identification System, or LACRIS, but unaware of the scale of use — including that hundreds of officers had access to the platform.

“That is a lot of people with access to the system, and shows its widespread usage,” he said.

Although some law enforcement officials have argued that such technology is an important tool, there has also been push back. San Francisco last year banned facial recognition technology on civil liberties grounds.

According to Rubenstein, the county system allows police investigators to submit images from witnesses, crime scenes, surveillance cameras or other sources and compare them against a database of nearly 9 million mug shots.

The system identifies “key contour facial features,” but is “only used to develop investigative leads, not to solely identify a suspect in a crime,” Rubenstein said. “No individuals are arrested by the LAPD based solely on facial recognition results.”

Still, Tajsar said the ACLU and others have serious concerns about such widespread use of the facial recognition system, including because computer algorithms and the system’s reliance on certain image pools like mug shots can make for an inherently racist search process.

“With mug shot images, the highest false positives are in American Indians, with elevated rates in African American and Asian populations,” the study found.

Todd Pastorini, DataWorks Plus’ executive vice president and general manager, said he has worked with forensic facial recognition systems in California for more than a decade, and has “never observed a racial bias.”

He said his company installed three facial recognition engines for LACRIS, from Rank One, NEC and Cognitec. For each probe image entered by a police officer, he said the engines kick back positive facial matches and then software selects the top 250 for the officer to review.

Pastorini said the systems “do not provide incorrect or correct identities,” but “a candidate list that requires the user to conduct further investigation to decide whether or not to pursue that investigative lead.”

The LACRIS system is used by 64 law enforcement agencies across the county, but it’s unclear which or how many use the facial recognition feature. The L.A. County Sheriff’s Department would not answer questions from The Times about the system’s use.

As the use of facial recognition among law enforcement has grown, California lawmakers have stepped in to put limits on it — including in connection with other technology systems like officers’ body cameras.

However, the LAPD has escaped some scrutiny in those discussions, in part because of its erroneous claims of not using the technology.

For example, in the summer of 2019, The Times asked Rubenstein about the department’s use of facial recognition for an article on proposed legislation to restrict its use with body cameras.

“We actually do not use facial recognition in the Department,” Rubenstein responded — adding only that there had been “a few limited instances” where it was used by other agencies working on investigations alongside the LAPD.

In November, the department denied a public records request for documents related to its use of facial recognition software by saying it didn’t use such technology or any related services.

In June, LAPD officials denied a records request for LAPD policies on facial recognition by claiming none existed. They’d given a similar response several years before, when the Center on Privacy & Technology at Georgetown Law requested records as part of a project assessing facial recognition capabilities at major police departments across the country.

However, last month, another records request, this one filed by Medium senior writer Dave Gershgorn, met with more success. The request specifically asked for emails mentioning “facial recognition,” “DataWorks Plus” and other related terms, and in response the LAPD released 368 pages of officers discussing the technology with one another and LAPD officials issuing directives around its use.

“I need it all the time for my Burglary cases,” one detective wrote to a colleague in May, in an effort to get trained on the system.

Another detective wrote to a colleague May 30, the day mass protests, arsons and burglaries broke out in the city, musing that the department should look into purchasing a new system of facial recognition, as it “may be a way of identifying violent protesters and looters.”

In another email from February, Lizabeth Rhodes, director of the LAPD’s Office of Constitutional Policing and Policy, directed commanders to ensure that only personnel who had received proper training on the system were accessing it, and that policies related to its use were followed. The memo also addressed the new state law barring its use with body cameras.

After reviewing the emails, which were posted to an online portal for city records, The Times sent Rubenstein a list of questions about the department’s use of facial recognition and its previous denials of such usage.

In response, Rubenstein disclosed the nearly 30,000 uses since 2009 — nearly 3,750 of which occurred since February, when Rhodes put out her advisory — and said that 330 people in the LAPD have access to the system. That number had been higher, standing at 525 officers with access at the time the department denied to the The Times that it used facial recognition.

Rubenstein said use of the county system is provided to LAPD at no cost, and that the LAPD does not use the software to scan crowds or in any live-streaming capacity. Despite regular audits of its use, he said he is not aware of any instances where the system has been misused by LAPD officials.

Rubenstein said his previous statement to The Times denying that the LAPD used such technology was intended only to convey that it did not use it with its body cameras — a key issue in the legislation that was pending in Sacramento at the time. He did not specify that distinction at the time, and the request for information from The Times had not specified body-camera usage.

The LAPD also sent a correction last week to the records requester who was told in November that the LAPD doesn’t use facial recognition.

“We are writing to inform you that the previous statement that was sent to you … was inaccurate,” the message read.

Beyond the denials, confusion around the LAPD’s use of facial recognition today is also partially rooted in its own vague references to the technology in the past — including as it ran various “pilot” programs that featured the technology.

For example, the Center on Privacy & Technology report, published in 2016, noted that the LAPD had described a CCTV surveillance system equipped with facial recognition technology in 2005, a “smart car” that would be equipped with it in 2007 and a CCTV system in the west San Fernando Valley that could recognize faces from 600 feet away in 2013.

Citing those examples, the report concluded that the LAPD “may have the most advanced face recognition system in the country,” but that it was unclear because the agency had responded to the center’s request for records by saying it had none to disclose.

Rubenstein said while discontinued programs in the past may have used the technology, the LAPD currently uses facial recognition only through LACRIS.