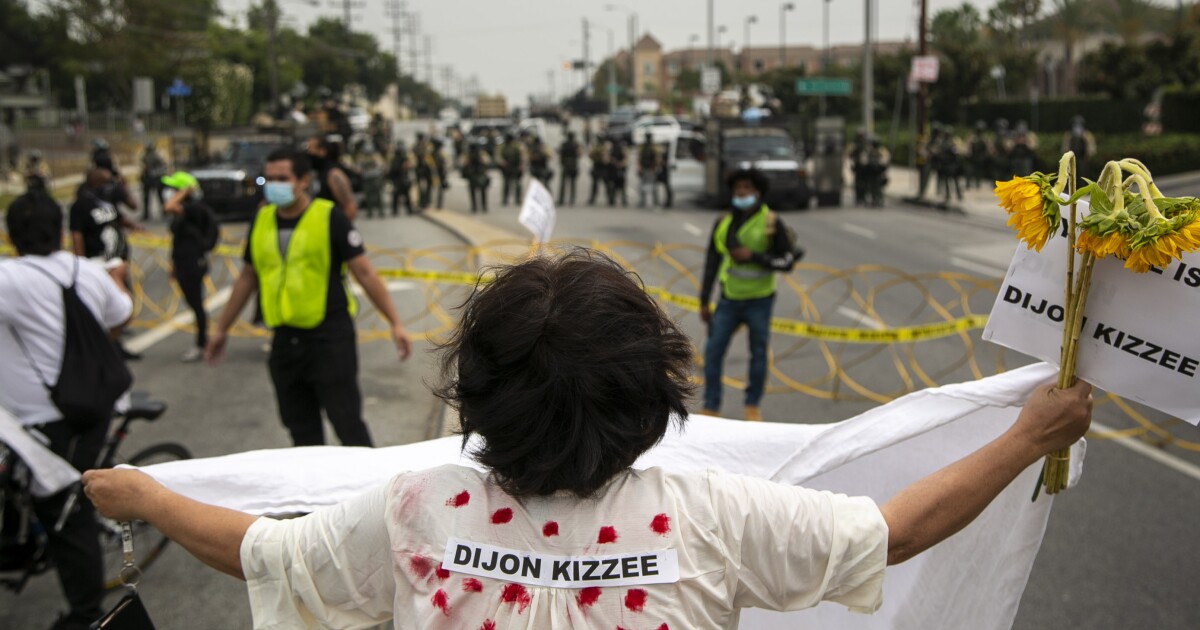 Plaintiffs in a class-action lawsuit are seeking a temporary restraining order and injunction to limit the Los Angeles County Sheriff’s Department’s use of nonlethal force at protests, claiming it has employed rubber bullets, tear gas and other chemical agents indiscriminately against peaceful protestors, journalists and legal observers in violation of the Constitution.

The petition, filed Monday in U.S. District Court, focuses on protests in recent weeks against police brutality and the shooting of Dijon Kizzee, who was killed by sheriff’s deputies Aug. 31 in Westmont after being flagged for a vehicle code violation while riding his bike. The incident has spurred daily protests in front of the South L.A. sheriff’s station.

In court documents, a group of 13 plaintiffs — including protestors injured at marches against police violence over the summer — claim that the department has been improperly using force to disperse crowds without giving those present sufficient warning and time to obey orders.

“Instead of deploying these weapons in a defensive manner to protect themselves and others, the LASD has been deliberately using less-lethal munitions and chemical agents in an indiscriminate and retaliatory fashion against people engaged in lawful activities, including journalists and legal observers,” a memorandum filed with the petition states.

The Sheriff’s Department did not immediately respond to a request for comment. A spokesman previously said that deputies used less-lethal force in response to protestors who threw rocks and bottles at officials.

“Deputies have not used less-lethal options simply because protesters refused to leave,” said Lt. John Satterfield in response to allegations of unprovoked use of force earlier this month.

The application is part of a class-action lawsuit filed Aug. 27 that claims the department engaged in “dangerous, retaliatory abuses,” including unlawful arrests and excessive use of force, at protests in May and June against the killing of George Floyd in Minneapolis and 18-year-old Andres Guardado in Gardena.

On Sunday, community organizers and family members of those killed by deputies stood outside the South L.A. sheriff’s station to announce another protest in the area next weekend.

“We’ll be quiet, we’ll shut up, as soon as we start seeing some accountability,” said Sequarier McCoy, an aunt of Kizzee, as she called for Sheriff Alex Villanueva to resign.

The petition for a restraining order seeks to stop the department from indiscriminately using nonlethal projectiles such as rubber bullets and pepper balls to disperse and control crowds unless there is a specific and immediate safety threat. It states that before such force is used the department should declare an unlawful assembly and provide clear notice of dispersal orders.

The filing also seeks to stop indiscriminate use of chemical agents such as tear gas and flash grenades to disperse crowds without adequate warning. It says that the weapons should only be used after other efforts to contain crowds have failed.

A memorandum submitted with the petition states that on Aug. 25, deputies fired rubber bullets, pepper balls and tear gas into a crowd after about 100 demonstrators marched peacefully in downtown L.A. to protest the police killing of Anthony McClain in Pasadena. It alleges that officials used force without warning or dispersal orders and that two legal observers from the National Lawyers Guild were targeted with a tear gas grenade despite following directions from deputies to move across the street.

In another incident on Sept. 5, 250 to 300 people went to the South L.A. sheriff’s station to protest the killing of Kizzee, 29. The filing describes people “milling around” listening to speeches when deputies began firing into the crowd with rubber bullets, pepper balls, flash bangs and tear gas grenades.

“Again, no warning or dispersal order had been given, and even as people retreated and ran away from the location, LASD deputies chased them and shot at them with rubber bullets,” the memorandum states.

On Sept. 7, 75 to 100 people gathered near the same station. The plaintiffs claim that at about 10 p.m., deputies began shooting projectiles, tear gas, and other munitions at protestors without warning. During the incident, a 19-year-old woman was shot in the right ankle with a black stinger grenade and struck at least three times in the back and once in her right calf with a rubber bullet, making standing difficult, the filing states.

“At the crux of this is they’re using less-lethal projectiles — rubber bullets, pepper balls, stinger grenades — to disperse people,” said Jorge Gonzalez, one of the attorneys representing the plaintiffs in the lawsuit. “Those are supposed to be used only when there’s an assault on the officers.”

Plaintiffs also claim that deputies have targeted demonstrators. In the memorandum, they describe how on Sept. 9, a man returning from picking up a first aid kit and other supplies for protestors found the tires on his truck slashed. A witness saw deputies slash the tires, the filing states.

As he was about to seek help for his vehicle, four Sheriff’s Department vehicles arrived and detained him as they searched his truck without permission, the plaintiffs allege. They said officials admitted to detaining him because he was bringing supplies to demonstrators.

The request for a restraining order comes after several county supervisors and members of the Sheriff Civilian Oversight Commission called for Villanueva to resign last week.

Some have expressed concern about the sheriff’s lack of compliance with subpoenas and have held that he has refused to share information with Inspector General Max Huntsman, who has accused the department of not cooperating with his investigations of the department for possible violations of freedom of the press. Villanueva has told The Times that he is not concerned by some officials’ lack of confidence in him and plans to continue serving.