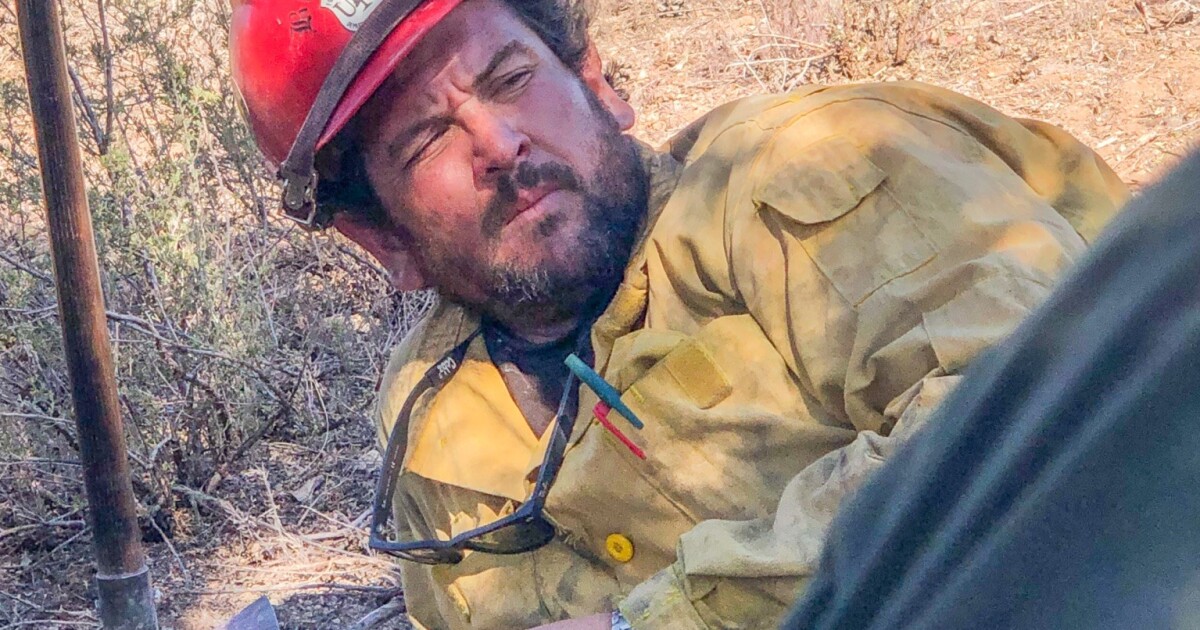 A formal vehicle procession is scheduled Tuesday morning to transport the body of a fallen firefighter who died battling the El Dorado fire to an Orange County mortuary.

An honor guard from the U.S. Forest Service, as well as representatives from the California Highway Patrol, will escort the body of Charles Morton, 39, from the main San Bernardino County coroner’s office to Ferrara Colonial Mortuary.

The procession is set to start at 10:30 a.m. and will follow this route:

He died Thursday while fighting the El Dorado fire, which has burned more than 22,500 acres in and around the San Bernardino National Forest near Yucaipa.

Morton is survived by his wife, daughter, parents and two brothers.

Residents in the San Bernardino Mountains area lined Highway 38 in respect last Friday as the fallen firefighter’s body was removed from the fire zone in a procession of police and fire vehicles.

“Charlie was a well-respected leader who was always there for his squad and his crew at the toughest times,” Vicki Christiansen, U.S. Forest Service chief, said in a statement. “Our hearts go out to Charlie’s loved ones, co-workers, friends and the Big Bear Hotshots. We will keep them in our thoughts and prayers.”

Morton died 12 days after the El Dorado fire was sparked by a pyrotechnic device that was part of a gender-reveal party at El Dorado Ranch Park in Yucaipa. The region was in the midst of a record-breaking heat wave, and flames chewed through the sun-baked grass that covered the hills of the park and quickly spread into the mountainous forest.

The fire was 60% contained as of Tuesday morning.

Morton was the 26th person whose death was linked to a California wildfire since August and the third person involved in battling the blazes to die in that span.

On Aug. 19, a firefighting helicopter on a water-dropping mission crashed in Fresno County, killing the pilot, Michael John Fournier, 52, of Rancho Cucamonga.

Firefighter Diane Jones, 63, was fatally injured Aug. 31 while battling the Tatham fire in Tehama County, which was part of the sprawling August Complex fire north of the Bay Area. That fire is now considered the largest in California’s recorded history in terms of acreage burned.

Jones was repositioning an engine in the Mendocino National Forest when it backed over an embankment and into fire, officials said. She was a volunteer firefighter in Cresson, Texas, and had traveled to California with a private company to fight fires with her son, officials said.

California has seen an unprecedented fire season, with more than 7,900 wildfires burning over 3.6 million acres in the state this year, according to the California Department of Forestry and Fire Protection.

The fires have destroyed more than 6,400 structures since mid-August, when a siege of dry lightning strikes sparked hundreds of blazes, some of which quickly spread through dry vegetation withered by a record-setting heat wave.

Experts say that climate change has played a role in the extreme conditions.