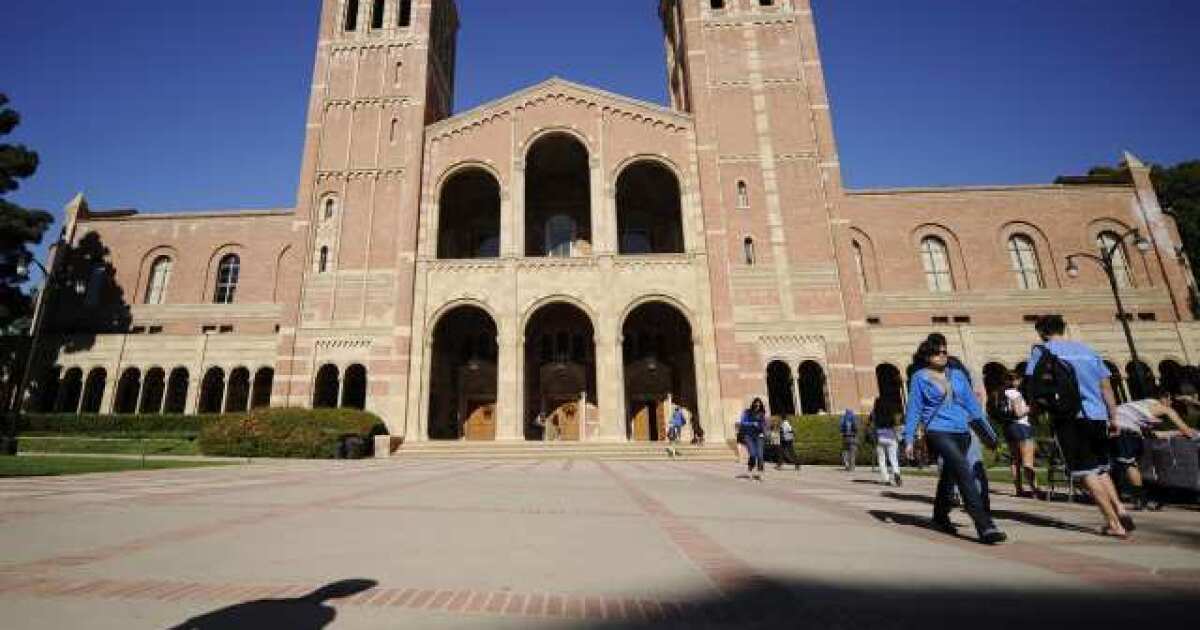 The University of California allowed “inappropriate factors” to influence admissions decisions, with four campuses admitting 64 applicants over a six year span based on criteria such as family donations or their relationships to campus staff, according to a state audit released Tuesday.

The audit, which scrutinized admissions practices from the 2013-14 through 2018-19 academic years at UCLA, UC Berkeley, UC San Diego and UC Santa Barbara, found the majority of the admitted students were white and at least half had annual family incomes of $150,000 or more. Among them, 22 applicants were admitted as athletes despite having demonstrated little athletic talent, the audit said.

UC Berkeley came under particular fire, with auditors finding the campus admitted 42 applicants based on their connections to donors and staff while denying admission to others who were more qualified.

“By admitting 64 noncompetitive applicants, the university undermined the fairness and integrity of its admissions process and deprived more qualified students of the opportunity for admission,” state Auditor Elaine M. Howle wrote in a letter to Gov. Gavin Newsom and legislative leaders.

In a statement Tuesday, UC President Michael V. Drake said the university would promptly address the concerns raised in the audit and discipline individuals involved in improper activities. He added that the audit’s recommendations would advance progress UC has made in reforming its admissions process following two internal reviews.

“I take the findings and recommendations very seriously and will do all I can to prevent inappropriate admissions at UC,” Drake said. “I have zero tolerance in matters of compromised integrity. Our entire organization is committed to a level playing field for every applicant. Unethical means to gain admission, as rare as they may be, run contrary to our longstanding values of equity and fairness.”

UCLA, in its own statement, said the university was reviewing the audit but was “committed to a transparent admissions process that is fair, consistent and equitable.” The university said that all of the athletics-related cases in the audit occurred in the past, before its athletics department adopted additional safeguards. The Samueli School of Engineering, which the audit implicated in a case of preferential treatment of one applicant, is also strengthening its admissions processes, the statement said.

UCLA added that it stood behind its holistic review process for applicants, which considers several factors including grades and coursework and assigns at least two independent readers for each application.

In a letter to the UC Berkeley community, Chancellor Carol Christ said the university is “committed to getting to the bottom” of the “highly disturbing allegations of improper conduct in our undergraduate admissions work.” She noted that the university has made numerous changes in recent years to strengthen its admissions policies.

“While we know that there is always room for improvement — and that any policy depends on individuals acting with integrity — we have confidence that our current admissions policies and protocols are sound,” Christ said.

The audit marks the second state effort in the last four years to scrutinize UC’s admissions process, following a 2016 review of the impact of growing nonresident student enrollment on California applicants. The intense state interest in who gets a UC seat underscores the enormous demand for access to the nation’s most prestigious public research university system — particularly at the flagship campuses. UCLA, which draws the most applications of any university in the nation, admitted just 15,643 of 108,837 freshman applicants for fall 2020. Overall, UC campuses admitted 149,461 students from among 215,162 applicants.

The state audit found far more instances of questionable admissions than the two cases UC auditors uncovered in the system’s own internal review of its nine undergraduate campuses, ordered last year by then-UC President Janet Napolitano in the wake of the national college admissions scandal.

The scandal, which has roiled colleges and sparked widespread public outrage, involved federal charges that business executives, two Hollywood actresses and a legendary fashion designer used fraud, bribes and lies to get their children into elite universities, including USC, Yale and Stanford. In the UC system, UC Berkeley and UCLA were ensnared.

The two-part UC review included a systemwide overview of controls in place to guard against admissions fraud and a deeper dive into actual campus admissions practices. Of the two cases of possible impropriety that were discovered, one involved a student admitted as a recruited athlete who did not subsequently appear on the team roster and the other involved the way one campus administered its appeals process for admissions decisions. UC auditors referred both cases to the individual campuses for investigation, did not identify the universities in the report and did not provide additional details.

The internal review resulted in several recommendations aimed at better policing potential fraud and conflicts of interest in admitting students. A UC spokeswoman said all campuses have implemented the required reforms, which include stronger verification of claims on students’ applications, reviews of potential links between donors and applicants, and stricter scrutiny of those admitted for special talents, such as athletes and artists.

In a February interview, Napolitano said she wanted to take a proactive step to ensure the UC system’s integrity and give Californians confidence that applicants are admitted on merit and not through fraud, donations or personal connections.

“Any student admitted through fraud is one too many,” Napolitano said at the time.

“The Office of the President has allowed the weaknesses in these practices to persist because it has not conducted adequate oversight of campuses’ admissions processes,” she wrote. She said the internal review was flawed because it allowed campuses to evaluate themselves and did not attempt to identify inappropriate admissions activity.

“Stronger standards and oversight are necessary to improve the university’s ability to guarantee a fair and merit-based admissions process and to detect and prevent inappropriate admissions decisions,” Howle said.

The state audit was initially requested last year by Assemblywoman Tasha Boerner Horvath (D-Encinitas). Horvath asked that state auditors identify, assess and test the risk of fraud in admissions practices at UCLA, UC Berkeley and UC San Diego. She also asked for information on whether selections are influenced by donations, connections or family relationships to alumni, known as legacy cases. Auditors were also asked to determine the extent to which diversity is considered in the admissions process and make recommendations to help increase significantly underrepresented groups.

In addition, Horvath asked for information about students admitted to the three schools under UC’s special admissions process, which gives extra consideration for athletic, artistic and other talents. The university’s internal review found stronger oversight was needed, prompting campuses to centrally document the number of such students and their exceptional characteristics, along with a tighter two-step verification process to review and approve the cases. Overall, those admitted by “special exception” amounted to about 1.7% of all students — 3,409 among 204,350 enrolled between fall 2017 and winter 2020, the UC review found.

The admissions scandal came to light last year, when federal prosecutors announced charges against Newport Beach college consultant William “Rick” Singer, who admitted to masterminding an audacious scheme to help affluent parents get their children into top-tier colleges through deception and bribes. Singer charged parents huge sums to rig their children’s entrance exams or pay coaches to designate them as recruited athletes; he has pleaded guilty to several felonies.

Federal prosecutors have charged more than 50 college administrators, coaches and parents in the sprawling scheme at schools across the country.

Then-UCLA men’s soccer coach Jorge Salcedo, who was charged with endorsing the fraudulent admission of two students as phony soccer players for $200,000 in bribes, signed an agreement with prosecutors in April to plead guilty to conspiring to commit racketeering.

At UC Berkeley, at least one student was admitted with fraudulent test scores. His father, David Sidoo, a Canadian businessman and former professional football player, was accused of paying $200,000 to rig the SAT exams of two sons, one of whom attended UC Berkeley. Sidoo pleaded guilty in March to a single count of conspiring with Singer to rig the exams and was sentenced in July to 90 days in prison.

Such cases of wealth and connections influencing admissions, however, are less prevalent at UC campuses than at many private universities. Among UC’s 285,000 students, 36% are low-income and 40% are the first in their families to attend college. Four of the nation’s top five universities recognized for serving low-income students well are the UC campuses at Riverside, Irvine, Santa Cruz and Merced, according to new rankings published this month by U.S. News & World Report. UCLA, UC Berkeley, UC Santa Barbara, UC Irvine and UC San Diego were all ranked among the nation’s top 10 best public universities by the magazine.