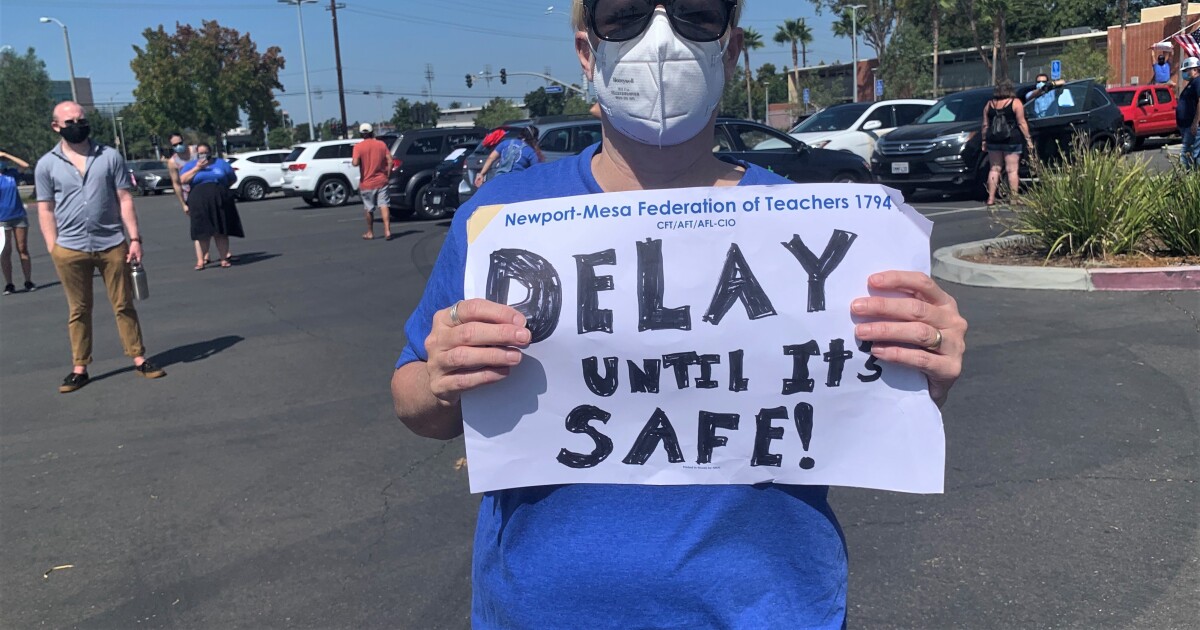 Teachers in two Orange County school districts have banded together with bold public protests and petitions, saying they are unwilling to go back to campus in the days and weeks ahead and signaling an undercurrent of broad concern among educators over the safety of returning to in-person instruction.

In the Newport-Mesa Unified School District — scheduled to open for students up through second grade next week— 75% of teachers said in a recent survey they were not satisfied with their district’s safety plan and felt the district was rushing its reopening. They showed their discontent during a noisy caravan protest and rally.

Teachers at Irvine Unified are circulating a petition that has gained more than 2,000 signatures from teachers, parents, staff and students, urging the district to remain online at the secondary school level. The petition stance goes against the teachers union position. All Irvine campuses are scheduled to open Thursday in some fashion.

Orange County, whose COVID-19 rates have fallen, is among the first cluster of large counties in California that has state and county clearance to reopen campuses closed by the pandemic since March.

The concerns among Orange County educators reflect fears expressed in a national online survey of 816 teachers conducted from Aug. 26 to Sept. 1 by the American Federation of Teachers. At that point, the school year already had started for most of them, although not necessarily with in-person classes.

“There is anxiety about their health, the students’ health, their community,” said Jeff Freitas, president of the California Federation of Teachers. “It’s just at a high level throughout the state.”

Until now, the story of school reopenings has centered on rural areas, away from urban communities where infection rates have spiraled out of control, and on the smaller, more closed communities offered by private schools, many of which have reopened through waivers or as “day camps.”

But public school districts in more populous areas, such as Orange, Marin, San Francisco and San Diego counties, are beginning to open their doors.

“There’s a lot of concern in those counties,” Freitas said. “They’re still in the red,” he said referring to the state’s color code to represent the virus threat level.

Under the state system, purple is the worst tier. Red is next, and campuses can reopen with appropriate, detailed safety precautions including social distancing in classrooms and on the playground, smaller class sizes with learning cohorts who stay together, the wearing of masks, and hand-washing centers. Carrying out these plans is based largely on the honor system, with county health departments not equipped for comprehensive safety checks.

“Teachers are not feeling quite safe and they feel they’re getting pushed back too early,” Freitas said.

In Orange County, 10 of 29 school districts have announced plans to open before the end of the month, according to an unofficial tally from the county education office. One district, Los Alamitos Unified, opened early this month under a county-approved waiver.

Newport-Mesa teachers union President Tamara Fairbanks said the concerns ran from large to small: The union wants students prescreened for symptoms before school, and they want to know who will supervise the isolation room with a sick student. Fairbanks noted that nurses sometimes rotated among two or three campuses.

Not every district neighborhood has the same low infection rates, she added, and district staff come from across the county, including from places such as Santa Ana, where the infection rate has been high.

The district defended its planning.

“We have a diverse community, many who highly welcome the reopening of our schools,” Franco said. “You might recall a few weeks ago we had parents demanding in-person instruction. And others who are hesitant.”

The debate over safely opening schools has raged downward from President Trump, who flatly called for all schools to reopen full time. According to the World Health Organization, “the role of children in transmission is not yet fully understood.”

New York City, the nation’s largest district, welcomed its youngest students back to campus Monday — after twice postponing a full reopening. Los Angeles Unified, the nation’s second-largest district, has not set a date for reopening. County officials said they would not approve a full return to campus until at least November because of the region’s high rate of coronavirus infections.

As children get older, they become more likely to catch the virus, experts say. And although children appear far less at risk of serious illness, they can carry the illness to others. L.A. schools Supt. Austin Beutner has cited recent findings that small children passed on the virus to adults at Salt Lake City childcare centers.

People with underlying health problems — whether students or adults — should carefully consider whether it’s safe to return to campus, and should take into consideration community infection levels and safety preparedness, the WHO advises.

Under state law, children must have the option of remaining online only. It’s not clear whether teachers have that same right in California. Union leaders tend to think so, but district officials may not have enough online teaching positions available. And what about teachers without personal risk factors who live with someone with underlying health conditions?

Every Irvine teacher with a preexisting condition was allowed to work from home, said Irvine Teachers Assn. President Teri Sorey, but it’s “a real possibility” that some instructors who live with a partner, child or family member in a vulnerable category may have to return to the classroom.

Sorey said she, her bargaining team and others had been working with the district “without a break since March” to develop sound safety protocols.

It’s not enough for some 200 teachers union members who signed the petition, about 12% of the members. Petition organizer James Garcia accused the district of “rolling out this haphazard plan very quickly.” More than 2,000 nonteachers had signed on by Monday afternoon. “I think the response is pretty telling.”

Irvine officials have defended their preparation as thoughtful and thorough. This includes setting aside $4 million for COVID-19 tests. The district of 35,000 students is offering elementary students the option of in-person instruction five days a week. All students have the option of attending staggered, part-time, on-campus classes in small groups.

English and journalism instructor Alex Goodman worries about bringing COVID-19 home to his wife, who suffers from asthma. That’s one reason why the Newport Harbor High School teacher joined the car caravan.

He put signs on his gray 2012 Volkswagen Jetta: “No safety, no learning” and “Not prepared. We should wait.”

Regardless of how individual teachers feel, open protests have been relatively rare. Union and district officials in Tustin Unified echoed those elsewhere in stressing that they were trying to collaborate. Tustin schools also are scheduled to open this week.

Teachers were given an option to stay home, but only a small number are choosing to stay online only, said public information officer Mark Eliot.