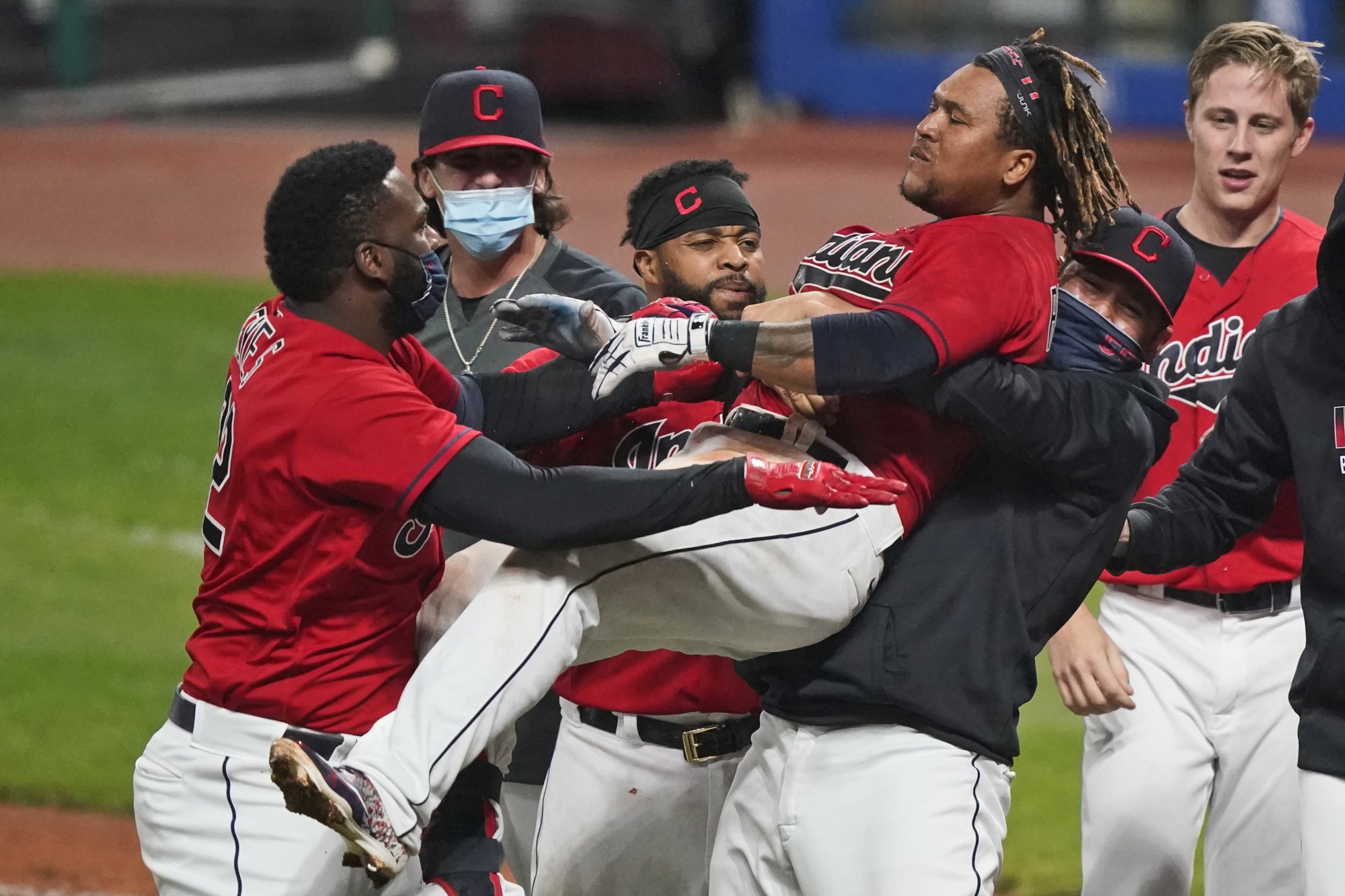 CLEVELAND (AP) — With one sweet swing, José Ramírez pushed the Cleveland Indians into the playoffs and strengthened his case for the AL MVP award.

Ramírez hit a three-run homer with two outs in the 10th inning, giving Cleveland a 5-3 win over the Chicago White Sox that clinched a postseason berth Tuesday night.

Ramírez’s drive to right off José Ruiz scored César Hernández and Francisco Lindor, setting off a wild celebration at home plate as the Indians reached the postseason for the fourth time in five years.

“Once I hit it, I knew it was a home run because I got it right on the barrel,” said Ramírez, who is hitting .500 (14 of 28) with six homers and 16 RBIs in his last seven games. “There was a lot less champagne than usual, but it was still a good celebration.”

Lindor had pulled Cleveland within one on a two-out double that plated Roberto Pérez, who began the inning on second base. After Matt Foster (5-1) walked Hernández, Ruiz entered and gave up the game-ending drive.

AL Central-leading Chicago lost for the fourth time in five games, creating a log jam at the top of the division. Minnesota is in second and Cleveland is just three games back.

Aces Lucas Giolito of the White Sox and Shane Bieber of the Indians face off Wednesday.

Chicago grabbed a 3-1 lead with two runs in the top of the 10th against Phil Maton (3-3). Adam Engel hit an RBI triple and scored on Nick Madrigal’s single.

“(Hernández) continued to keep his ears open to whatever was going on in the dugout, as opposed to just the field,” Renteria said. “If we win that ballgame, nobody is thinking about frustrations. We have five games left, we’ve got to put ourselves on track.”

Hernández hit a solo shot in the first and Chicago tied it in the sixth when José Abreu connected off Adam Plutko, sending a drive to right-center for his 19th homer.

Abreu leads the AL with 56 RBIs and 74 hits. He is second in homers and third with a .332 batting average. Fellow MVP candidate Anderson went 1 for 4, dropping his average to .353, while Ramírez has 12 home runs and 26 RBIs in his last 24 games.

“If it happens, it will be a great blessing from God, but in the meantime, I’m going to have a blast on the field,” Ramírez said. “I’ve been a finalist two times, but I don’t think about it.”

Right-hander Cal Quantrill gave up one hit in four scoreless innings for the Indians, becoming the ninth Canadian-born pitcher to start for the franchise.

Indians right-hander Triston McKenzie, who won his major league debut on Aug. 22, has been moved to the bullpen in preparation for the first round of the playoffs. The 23-year-old prospect went 2-1 with a 3.68 ERA in six starts.

“I think he can bring velocity out of the bullpen,” Alomar said.

White Sox: C Yasmani Grandal (right hand bruise) was not in the lineup, but struck out as a pinch hitter in the 10th inning, one day after being struck by a foul ball off the bat of Tyler Naquin.

Indians: RHP Jefry Rodriguez (right shoulder strain) is on the 45-day injured list and will not pitch again this season. Cleveland has only made three IL moves since setting its roster on July 23.

White Sox: Giolito (4-3, 3.53 ERA) has not logged a decision in two starts against Cleveland this season, posting a 1.38 ERA with 15 strikeouts in 13 innings. Giolito is expected to start Chicago’s first postseason game.

Indians: Bieber (8-1, 1.74 ERA) makes his 12th and final start of the regular season. The 2019 All-Star Game MVP leads the AL in wins, ERA and strikeouts with 112. Bieber is widely considered the Cy Young Award favorite.