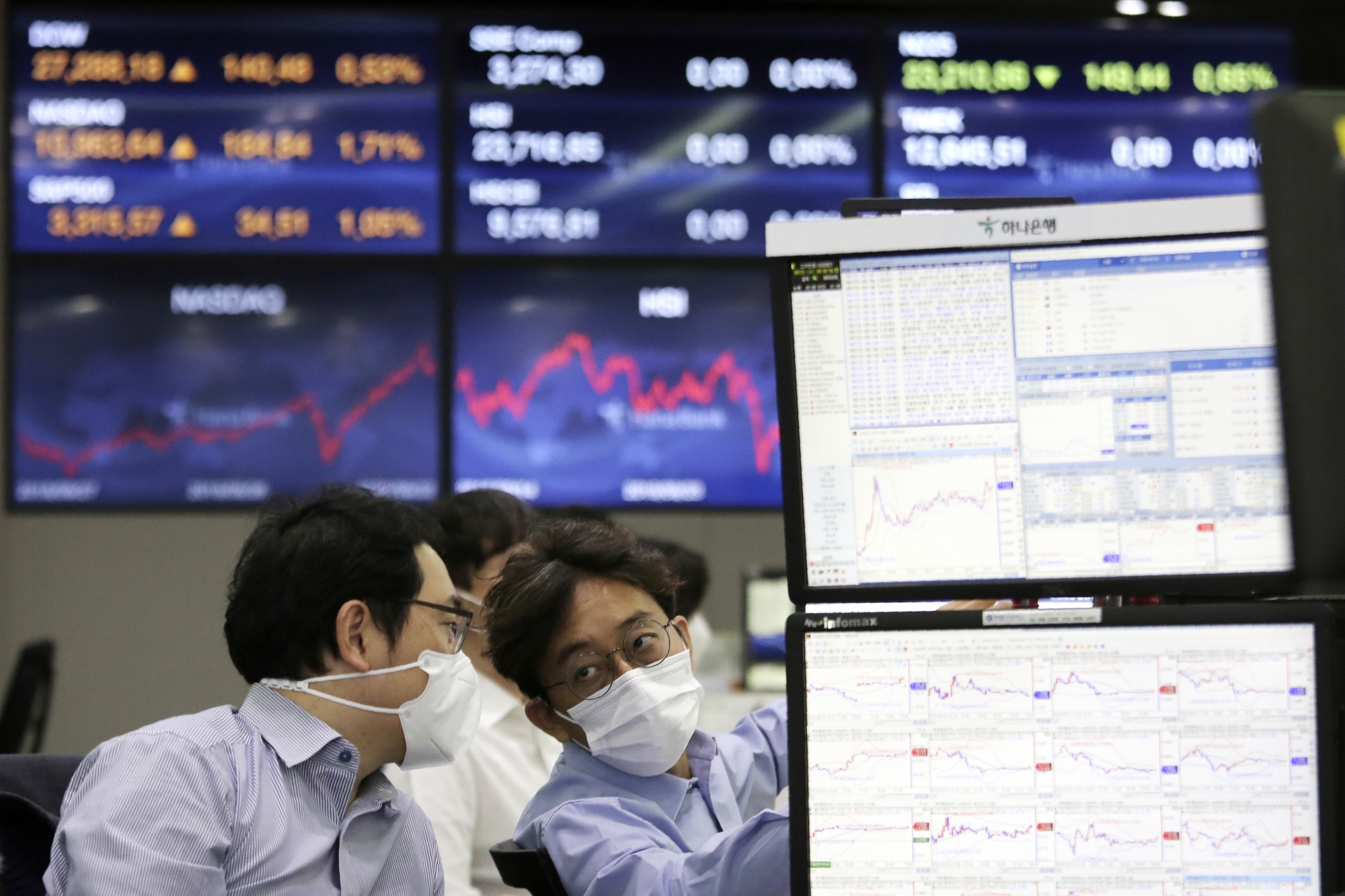 The S&P 500 was 0.6% lower after giving up an earlier gain, the latest erratic trading for a market dominated by several sudden turns of momentum recently. The Dow Jones Industrial Average fell 59 points, or 0.2%, to 27,228, as of 11:36 a.m. Eastern time, and the Nasdaq composite was down 1%.

This week alone, a Monday swoon brought the S&P 500 near the edge of a 10% drop from its record high set on Sept. 2. It rebounded the following day to snap its first four-day slide since stocks were selling off in February, though momentum has been quick to shift even by the hour.

Nike jumped 9.8% for one of the biggest gains in the S&P 500 after it reported much stronger profit than analysts expected.

Johnson & Johnson rose 1% as it begins a huge final study to try to prove if a single dose COVID-19 vaccine can protect against the virus. A handful of other vaccines are already in final-stage studies, and investors increasingly expect one to be available within the first three months of 2021. The hope is that it can help the economy get close to normal again and allow strong growth to resume.

At the center of the market’s big swings this month have been Apple, Amazon and other Big Tech stocks. They soared through the pandemic on expectations that their growth will only strengthen as the pandemic accelerates work-from-home and other trends that benefit them. But they began falling early this month amid fears that they had grown too expensive.

Several were weakening again on Wednesday, with Amazon down 1.9% and Microsoft down 1.3%. Apple was down 1.3% after earlier flirting with a small gain.

Stocks that would benefit from a return to normal made slight gains, though. Norwegian Cruise Line Holdings rose 0.8%, and Delta Air Lines gained 0.5%.

Part of this week’s early stumble for stocks was due to worries about European governments imposing tougher restrictions on businesses to slow the spread of the coronavirus, which hurt travel-related companies in particular. But analysts said the U.K. orders announced Tuesday weren’t as extreme as some investors had feared.

European stocks rose despite data showing the region’s economic recovery may be faltering. Business activity is slowing as weakness in the service sector is countering strength in manufacturing, according to preliminary data from a survey of purchasing managers by IHS Markit.

The survey’s composite reading was at a three-month low, though manufacturing was at a 25-month high.

Treasury yields were holding relatively steady, and the 10-year yield rose to 0.69% from 0.68% late Tuesday.

Yields have remained very low as the Federal Reserve has said it expects to keep short-term rates at nearly zero for years. Such support helped Wall Street halt its sell-off of nearly 34% earlier this year, along with a big stimulus effort by Congress.

But extra unemployment benefits and other aid from Congress have already expired. Some areas of the economy have seen growth slow as a result, and investors say a renewal is crucial. But partisan disagreements have kept Congress stymied. The vacancy on the Supreme Court following Justice Ruth Bader Ginsburg’s death has deepened the country’s partisan split even more.

Fed Chair Jerome Powell said on Tuesday that the economy would benefit from support by both the central bank and Congress. He is testifying again Wednesday at a hearing for a House subcommittee on the coronavirus crisis and again said the economy will likely need more support.

“The recovery will go faster if there’s support coming both from Congress and from the Fed,” he said.