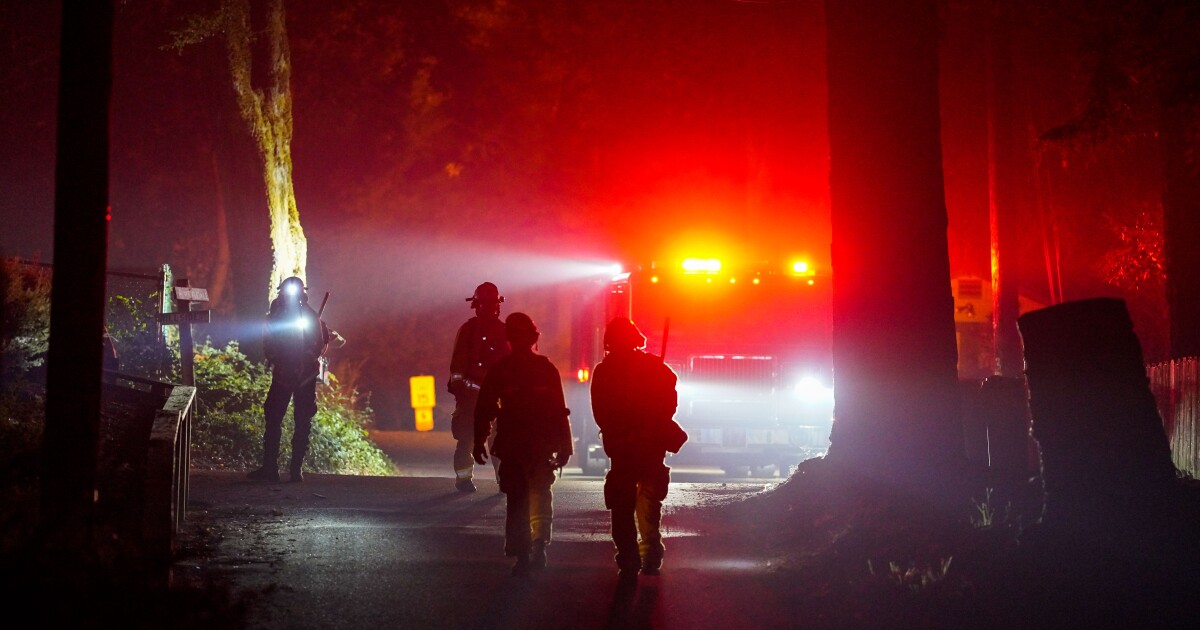 Reeling from the worst fire season in California’s history, 3 in 4 state voters say wildfires pose a greater threat today than ever before, yet they are divided sharply along party lines about what role climate change plays in the infernos, according to a new poll.

The widespread belief that California’s wildfire threat is greater now than in years past was held by 74% of surveyed voters, and included majorities ofcoastal and inland voters, regardless of region, age, sex and political ideology, according to a poll performed by UC Berkeley’s Institute of Governmental Studies.

“It’s a belief you don’t have to argue with people about, it’s really out there,” said Mark DiCamillo, a veteran pollster and institute director.

Deep fissures exist, however, and many of them are attributable to partisan politics, DiCamillo said.

About 83% of Democrats consider wildfires to be a “much more” serious threat today than in the past, while only 59% of Republicans share that same belief, the poll found. Among those with no party preference or another party designation, it was 72% and 70%, respectively.

While its heartening that a majority of Californians, including Republicans, see the threat of wildfires has changed with time, the denial of climate change among conservatives indicates there is still a ways to go, said Kristina Dahl, a senior climate scientist with the Union of Concerned Scientists.

The fossil fuel industry denied climate change and its role in it for years and those doubts have been given a huge platform by President Trump and other GOP lawmakers in recent years, she said.

“Those seeds of doubt were planted very deliberately and a long time ago,” Dahl said. “That’s something that pervades the public’s thinking on climate change and also provides convenient talking points to relevant authority figures who feel the same way.”

During a recent visit to California, Trump was pressed by California’s natural resources secretary, Wade Crowfoot, to acknowledge the role climate change played in recent fires.

“I wish science agreed with you,” Crawfoot said.

While it’s remarkable that such a large slice of California believes the threat of wildfires is worse than in the past, DiCamillo said, it’s also notable that there’s alignment in what government can — or can’t — do to help.

The results are likely a reflection of a number of truths, Dahl said. California’s forests have been undermanaged for generations, and it will take longer than 10 years to improve them. Also, the concept of wildfire mitigation is complicated.

Voters’ thoughts on how likely their individual communities may suffer serious damage from wildfires in the next decade, meanwhile, were divided nearly evenly among those who thought it was extremely or very likely (31%), somewhat likely (30%) and not very likely (25%). Overall, more than a third of voters thought it was highly likely that residents in their local community would suffer serious damage from a wildfire in the next decade, including 8% of respondents who said saying they’ve already suffered such damage .

But diving into the numbers, the attitudes grew more pessimistic moving away from city centers and into rural settings that are most vulnerable to fire.

About 44% of Orange County residents, 38% of L.A. County residents and 33% of Central Valley residents believe it’s not likely their area will experience fire damage in the next 10 years. But 39% of rural Northern California voters, 35% San Diego and other Southern California voters and 34% of Bay Area voters believe it’s extremely or very likely that they will. About 28% of L.A. County voters believe it’s extremely or very likely wildfires will damage homes in the area in the next decade, 38% said it’s unlikely and 6% said they already have.

Nearly a quarter, 23%, of Northern Californians told pollsters their community had already experienced wildfire damage, and 85% of voters in that region said that wildfires posed a minor or major threat to their family living situation. About 66% of that constituency also said that climate change was a major contributor to the wildfire threat.

Overall, while three-quarters of Californians believe the threat of wildfires is increasing, fewer of them thought it was a threat to their community personally. Dahl said that was not a surprise, and she’d like to see how Californians feel in a quiet fire year, should we get another one.

“It echoes the phenomenon we see nationally … many more people feel global warming will affect someone else [rather] than it will affect them personally,” Dahl said. “Whether this is human nature, wishful thinking that we’ll be excepted from the tragedy of climate change or whether people believe they have a greater deal of resilience, there can be a lot of complex factors into a response to that question.”

As of Thursday, some 8,000 wildfires have burned at least 3.6 million acres and killed 26 people in California this year while destroying more than 6,600 buildings.

The Berkeley IGS poll, supervised by DiCamillo, was administered online in English and Spanish from Sept. 9-15 among 7,198 registered California voters. The margin of error for the full sample is estimated at roughly 2 percentage points. Further details on the poll questions and data can be found at the Berkeley IGS website.