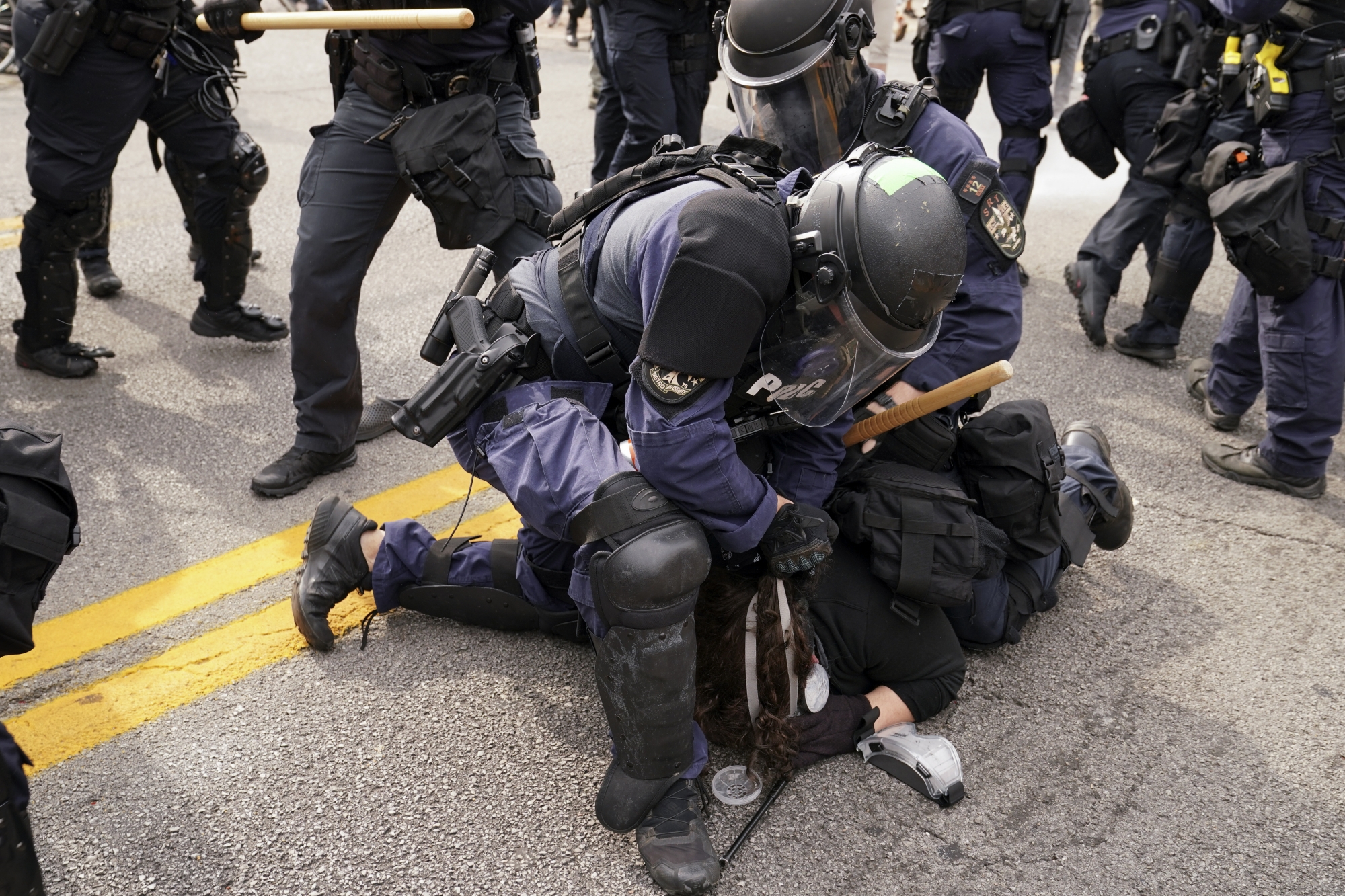 LOUISVILLE, Ky. (AP) — Angry, confused and shedding tears, demonstrators who spent months calling for justice in the fatal police shooting of Breonna Taylor resumed their protests Wednesday after prosecutors announced a single officer had been indicted — but not on charges involving the Black woman’s death.

The protests, which rekindled as soon as news of the grand jury’s decision broke Wednesday afternoon, appeared to be largely peaceful, although as the day wore on, police in protective gear clashed with protesters in some areas and used batons to push some of them down.

Late Wednesday, Louisville police said an officer had been shot, but did not elaborate on the circumstances of the shooting. During the protests, officers detained at least four people, who sat on the ground with their wrists bound behind them. As television cameras broadcast the scene live, a protester pointed at an officer and shouted: “Say her name!”

An Associated Press reporter saw National Guard members and armored military vehicles in downtown Louisville. At one point Wednesday night, police in riot gear fired flash bangs and formed a line at Jefferson Square, which has been at the center of protests. The square had largely cleared out ahead of a nighttime curfew as demonstrators marched through other parts of downtown Louisville.

Protests quickly erupted elsewhere as well: Demonstrators marched through the streets of New York, Chicago, Washington, D.C., Atlanta, and Philadelphia. Packed into a New York City Plaza, protesters chanted, “Say her name, Breonna Taylor,” before marching in the street in downtown Brooklyn, past onlookers and honking cars. They were accompanied by musicians setting a steady drum beat.

“It’s a volcano built up and now it’s exploded,” said Dekevion Gause, who sat beside a Louisville park memorial to Taylor made of flowers, paintings, and tiny grave markers representing Black people killed by police.

Gause said all of the officers involved in the March 13 raid on Taylor’s home should have been charged with manslaughter.

“It’s kind of a slap in the face,” he said of the grand jury’s decision.

Gause gathered with dozens in Jefferson Square Park, dubbed “Injustice Square” by protesters who made it their impromptu hub during months of demonstrations. People huddled around a single speaker Wednesday to listen as prosecutors announced that fired police officer Brett Hankinson had been charged with wanton endangerment for firing into a home next to Taylor’s.

A grand jury brought no charges for killing Taylor, who was shot multiple times by police who burst into her home during a drug raid gone wrong. While there were no drugs in Taylor’s apartment, her boyfriend shot and wounded a police officer. State Attorney General Daniel Cameron said the officers’ shots that killed Taylor were fired in self-defense.

Upon hearing the news, many gathered in the square began to cry, expressing confusion and sorrow. Others exclaimed they had seen this coming.

“We know that this means that this is the next level of our protest, “ said Shameka Parrish Wright, who joined the protests Wednesday. “We got work to do, we got to get Breonna’s law passed.”

She was referring to a push for a state law to ban so-called “no-knock” search warrants like the one police had when they went to Taylor’s home.

Within minutes of the announcement, about 100 demonstrators marched from Jefferson Square along the downtown thoroughfare of Sixth Street chanting: “No justice, no peace!”

Many simply sat or stood in stunned silence after hearing the grand jury’s decision.

Jefferson Square became the epicenter of Louisville residents’ outrage over the killing of Taylor, who became a national symbol of racial injustice much like George Floyd, the Black man who died under the knee of a Minneapolis police officer.

Cameron, a Republican and Kentucky’s first Black attorney general, insisted prosecutors had followed the law even though “my heart breaks for Miss Taylor.”

“Criminal law is not meant to respond to every sorrow and grief,” Cameron said after the charges were announced.