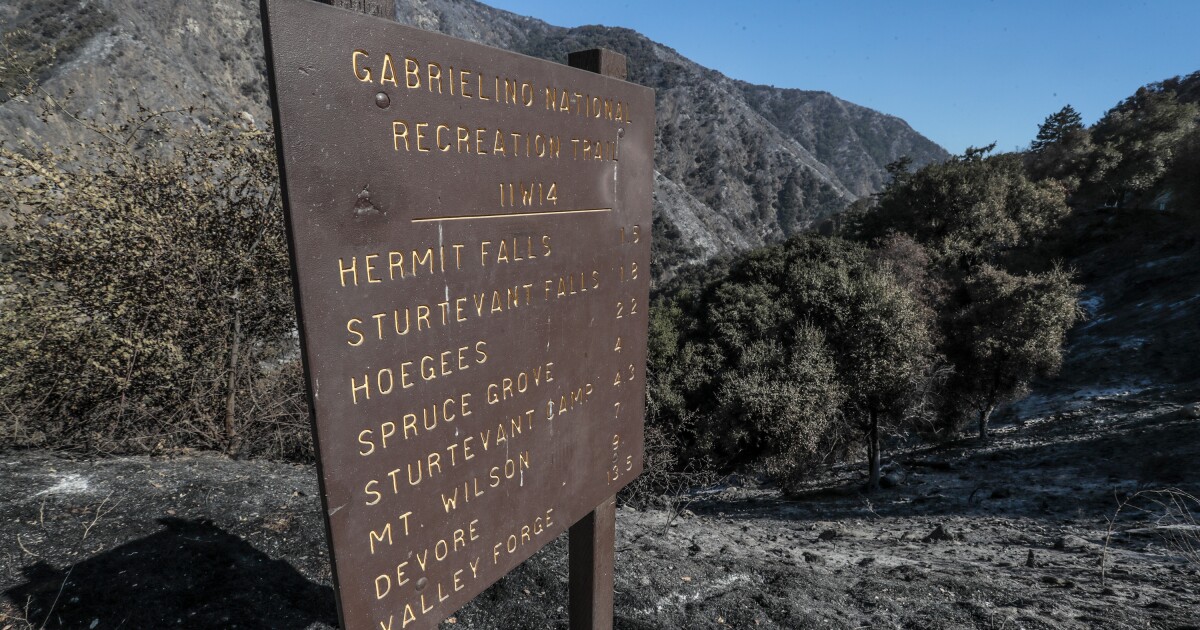 Crumbled rock, ash and dust carpet the winding road into Big Santa Anita Canyon, a remote outpost just north of Arcadia in the confines of the Angeles National Forest.

The canyon has long been a popular destination for hikers and tourists looking to escape the urban trappings of Los Angeles, but on Tuesday afternoon, it was eerily quiet: The road has been blocked since the Bobcat fire swept through the area days before, leaving in its wake a barren moonscape of seared and naked hills.

The massive fire, which has burned more than 113,000 acres since igniting Sept. 6, has been fickle from the start. At times, fire crews seemed to be playing whack-a-mole with the flames, achieving containment at one edge only to see an unexpected flare-up at another.

Yet, the fire’s erratic behavior that has necessitated evacuations from Sierra Madre to Pearblossom is what appears to have spared portions of the canyon, including the Adams’ Pack Station and picnic area, which emerged largely unscathed save for a handful of burn spots.

“I’m so grateful that my place is still standing,” said Maggie Moran, who lives in and owns Adams’ Pack Station. “I was expecting it not to be. Everything around us burned.”

Not yet accounted for, however, are 80 historic cabins and the separate 1893-built Sturtevant Camp, all of which are tucked deeper into the canyon. Built between 1907 and 1936, the cabins are part of a unique relationship between Angelenos and the national forest.

Private owners of the cabins, which sit on federal land, are granted 20-year special-use permits from the Forest Service. The cabins can’t be purchased using a mortgage, and owners cannot use them as their primary residence.

The result is a small, close-knit community of people who “gather to work on each other’s cabins and socialize together, bonded by our shared experience and love for this unique place that has been a community since the early 1900s,” said Ben Fitzsimmons, president of the Big Santa Anita Canyon Permittees Assn.

The cabins aren’t accessible by car. The closest is a three-quarter-mile hike from the pack station, and the most distant is four miles in. Donkeys are typically available to transport personal items for a dollar per pound. There is no electricity, no municipal water, no septic system, no garbage service and no address, according to the cabin association.

“A cabin owner here is in custody of a living example of California history and should respect it as such,” the association says on its website.

Now, the community fears the worst.

“We think we lost most of it,” Deb Burgess, a cabin owner and president of the Sturtevant Camp, said in the days following the flare-up in the forest.

As of Wednesday, no one — neither fire crews nor cabin owners — had laid eyes on the cabins or camp. The access trail is littered with fallen rocks and trees, and officials said it will require hand crews and mechanical work to make it passable.

Moran said the community is both “hopeful and mourning” while cabin owners await information.

“Some people have had those cabins since before they were born, and they have been passed down through generation after generation,” she said. “And although it wasn’t their main home, some people literally spent every weekend in the cabin, and so you feel their loss.”

Cabin owners are also doubtful about whether the Forest Service will allow any burned structures to be rebuilt. Burgess said she was previously told that anything more than 50% destroyed could not be restored.

“That’s a hard question,” Mitchell said of the possibility of rebuilding. “There are historical factors, but these are extreme circumstances.”

The community is now stuck in limbo while it waits for an official update, which may take weeks, if not longer.

Standing in the canyon, it’s easy to imagine the outcome going either way: The unpredictable fire left some hillsides black, while others remain green and untouched, some trees dead and others standing tall.

Yet the view from inside the canyon also reinforces the difficulty — and the magnitude — of what fire crews have been battling. President Trump’s claims that California should have “raked the floor” of its forests better to prevent the spread of historic wildfires seems out of touch with the vast terrain.

On Tuesday, chairs and tables at the shuttered pack station sat like ghostly reminders of the once-thriving outdoor destination.

The canyon was quiet, save for a soot-blackened squirrel that ran across the pack station’s deck, a welcome sign of life amid a fire season characterized by uncertainty.