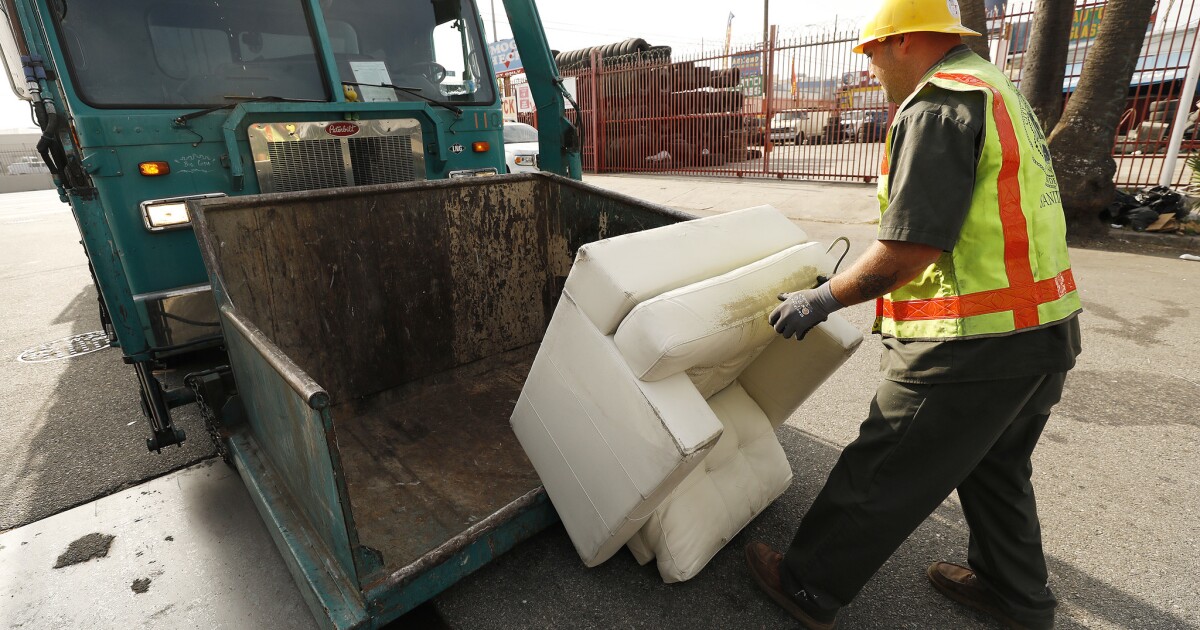 A federal judge concluded Wednesday that Los Angeles defied an April order that prohibits the city from seizing and destroying bulky objects such as mattresses and carts based solely on their size, deeming it to be in contempt of court because it had posted notices that violated her ruling.

In her decision, Judge Dale S. Fischer did not impose financial sanctions on the city, but told it to draft “remedial notices” that would be posted for at least two weeks in the same areas as the improper notices.

Attorneys representing the homeless outreach and advocacy group Ktown for All and several homeless people complained that L.A. had posted signs ahead of a cleanup in San Pedro indicating that “Bulky items are always prohibited,” as well as other improper notices in three other neighborhoods.

The violations occurred, they said, after L.A. resumed some “comprehensive cleanups” earlier this year — cleanings that require unhoused people to move their tents.

Putting up such signs is “not simply a harmless act,” the attorneys wrote, because people are likely to abandon their belongings thinking they will be removed, with “no way of knowing that the city is enjoined from actually doing so.”

Under the April order issued by Fischer, bulky belongings can still be confiscated in other circumstances, including if they are blocking the sidewalk or threaten public safety. But city crews are not supposed to remove items simply because they are big, according to the preliminary injunction.

Los Angeles city attorneys countered that the “vast majority” of its actions were in line with the court injunction, saying it had posted more than 1,000 permanent signs about cleanup operations after the decision and “not a single one” violated the ruling. Attorneys for the city said there were merely “four isolated instances” in which faulty notices were issued.

“To be clear, despite these errant notices, no bulky items were removed or destroyed based on their size during these cleanups,” the city contended in a court filing, and “there is no evidence that any person relied on these notices to their detriment or suffered any harm as a result of the notices.”

At a Wednesday hearing, Fischer grilled a city attorney about how word had gotten out to city employees about the court injunction. In her written decision, the federal judge concluded that the city failed to show it had “substantially complied” with her order or “took all reasonable steps” to do so.

Fischer decided not to impose monetary sanctions or award attorney fees, but directed the city to meet with the homeless advocates to come up with a remedial notice, which must be filed with the court by the end of the month.

Such notices could simply state that the court has barred enforcement of the “bulky item” rule, one advocate said at the hearing.