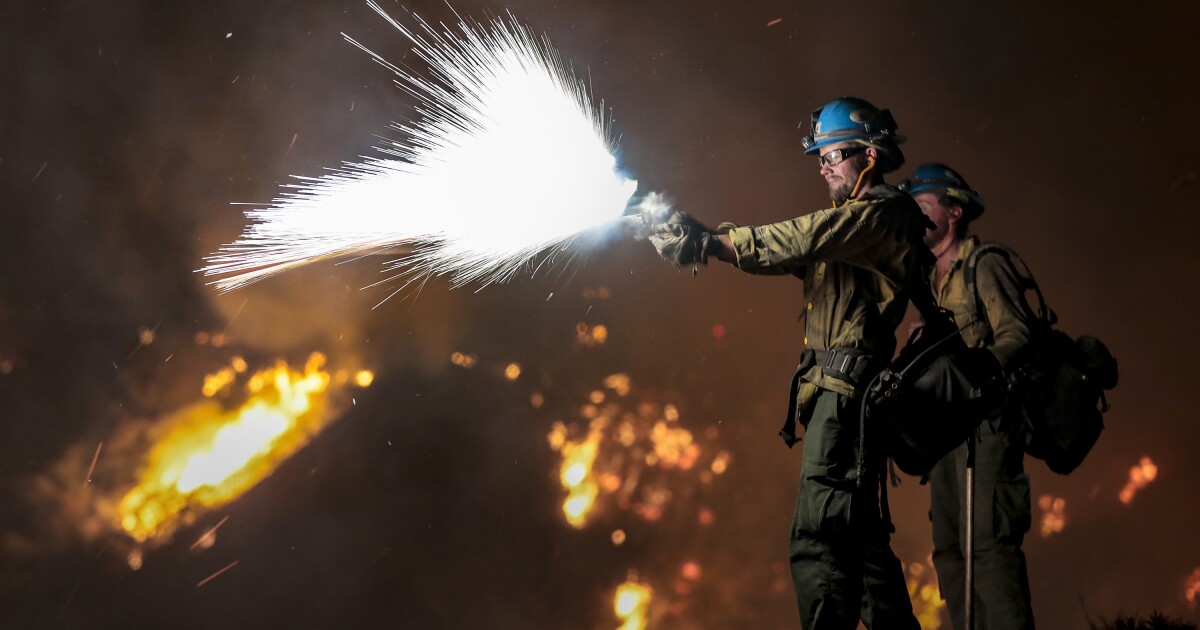 California has already endured its worst fire year in recorded history, but with more heat and wind in the forecast, officials say conditions could get even worse as the state enters the peak of its traditional burning season.

Another heat wave is bearing down on California — adding a potent ingredient to an unwelcome meteorological cocktail that will bring dangerous fire weather conditions to some parts of the already scarred state.

It could be a double threat, making it harder to contain still-burning fires while also helping spark new ones when firefighting resources are already stretched thin. In recent years, some of California’s worst fires have ignited in October, November and even December, when hot Santa Ana, sundowner and diablo winds bear down, fanning the flames.

“There are another two months of drama ahead,” climatologist Bill Patzert said. “If you think the season is bad now, just wait.”

Even beyond the upcoming heat wave, fire experts say the conditions in California are primed for more destructive fires that will take much more than Mother Nature to tame.

“The broad confluence of factors that you got there in California — the Mediterranean climate, the [dead trees] in the Sierra and then over 2 million properties at risk — shouldn’t be a surprise,” said Tom Harbour, retired fire chief of the U.S. Forest Service. “It’s trite to say … this isn’t the worst of it.”

The latest forecast has fire officials on edge.

A large area of high pressure covering almost the entire West Coast is expected to build over the weekend, eventually boosting the mercury to record-threatening peaks in some parts of California early next week, according to David Sweet, a meteorologist with the National Weather Service in Oxnard.

Although the heat won’t spike to levels seen in mid-August and during Labor Day weekend, temperatures could climb 10 to 20 degrees above normal.

“Very warm temperatures and, again, dry conditions — so there will be at least elevated fire weather conditions, as well,” Sweet said. “So we’ll have to be concerned about the rapid spread of fires.”

That’s alarming news for a state in the throes of an unprecedented firestorm. Five of the six largest blazes ever recorded in California have ignited since August, and crews are working feverishly to contain 26 major wildfires still chewing through parts of the state.

Seasonable weather will persist through Friday. A robust warming trend is then forecast this upcoming weekend and into early next week. Triple digit temperatures will be possible inland while 80°s to potentially even 90°s possible closer to the coast. Stay tuned! #CAwx #CAHeat pic.twitter.com/h92A3BGesA

A fire weather watch will be in effect Saturday through Monday for a swath of Northern California, thanks to hot temperatures combined with low humidity and gusty winds, said Daniel Berlant, a spokesman for the California Department of Forestry and Fire Protection.

The watch covers a somewhat horseshoe-shaped area, stretching from just above Redding southeast into the Sierra foothills, as well as down into and around the San Francisco Bay Area.

“The atmosphere is going to be dry and warm, and all these ingredients together lead to critical fire weather,” meteorologist Drew Peterson said.

Pacific Gas & Electric Co. spokesman Jeff Smith said the utility’s meteorologists were closely monitoring the conditions but that no decision had been made about possible power shutoffs.

Although Southern California was not included in the watch area, “very hot and dry conditions will bring an elevated threat for large fire Sunday through early next week,” according to a forecast from the Southern California Geographic Area Coordination Center.

“Even though winds will be fairly light, rapid rates of spread will be possible in the afternoons where fuels and topography are favorably aligned,” that forecast states. “Fires will be able to burn actively at night since humidity recovery will be very poor.”

Firefighters in Butte County are trying to contain the North Complex fire before weekend winds cause another flare-up.

Firefighting teams built ground lines Wednesday to keep the blaze from pushing into Forbestown. Shane Lauderdale, a Cal Fire branch director, said in a virtual briefing Thursday morning that they “had an amazing amount of success.”

“[The] focus of the teams in there today will be going in deep for mop-up activities for the next three days,” he said, “in front of our change in weather.”

As of Thursday morning, the North Complex was 78% contained. It has consumed more than 304,000 acres, destroyed 1,947 structures and killed 15 people — placing it among the state’s largest and most devastating wildfires, according to Cal Fire.

The North Complex is among a number of historically large wildfires burning across California.

Another is the Creek fire in the Sierra foothills northeast of Fresno. At more than 290,000 acres, it’s the sixth-largest fire recorded in state history — and the biggest standalone blaze that’s not part of a complex of fires.

“Things are going to be kind of slow and steady before we start building the heat Saturday and especially late in the weekend and into the following week,” said Mark Pellerito, an incident meteorologist for the fire.

Although the fire was 34% contained as of Thursday morning, that figure — which represents how much of a fire’s edge firefighters think they can stop from expanding — is only part of the equation. Unburned fuels in the fire footprint can still potentially flare up, particularly during adverse weather.

Don Watt, a fire behavior analyst for Cal Fire Incident Management Team 1, described these as “islands inside the fire.”

“As we continue to get warm and dry, those will continue to burn, and we’ll have a lot of smoldering material,” he said during a Creek fire briefing.

“There’s a very high concentration of dead and downed fuels with the tree mortality,” he said this week, and “those will take weeks to burn out in some areas.

“The fire is looking much better, but we are still seeing that active burning throughout many areas.”

The forecast also is a concern for crews battling the Bobcat fire, which has blazed a destructive trail through the Angeles National Forest from the foothills above Monrovia to the Antelope Valley.

“We are expecting elevated to critical fire weather,” U.S. Forest Service spokesman Andrew Mitchell said Wednesday. “It all depends on this weekend.”

Officials have made significant progress in their fight against the blaze, which ignited Sept. 6 and has burned more than 113,000 acres. As of Thursday morning, containment was at 50%, nearly tripling in a little over 36 hours.

At the August Complex fire — by far the largest in California history at more than 859,000 acres — officials said critical fire weather was expected late in the week, with winds out of the southwest potentially gusting up to 25 mph on the ridge tops.

“Any embers up on the ridges will be able to be lofted and put forward ahead of the fire so … there’s a potential for spot fires ahead of the fire, maybe up to a mile with those types of winds,” said Karen Scholl, operations section chief for the Alaska Interagency Incident Management Team, speaking at a briefing Wednesday morning. “It all depends on where the embers start from.”

In Trinity County, one of California’s most rugged and forested counties, the blaze was shooting spot fires and slowly driving toward inhabited areas — with winds expected Wednesday night to bring the fire closer to some of the small, rural towns surrounding Ruth Lake.

With fire crews stretched thin, volunteer departments are making last stands across the area, begging for help and equipment to save homes that belong to family and friends.

Kody Ables, a volunteer and dozer driver with the Southern Trinity Volunteer Fire Department in Mad River, has been building containment lines for 15 days. Tuesday night saw the fire reach that trench — then fly over in places, with embers starting small burns.

On Wednesday, after a night shift, he woke to a call that the fire was within a few hundred yards of a friend’s house.

“It’s starting to scare me,” he said.

Ables said his unit ran on a shoestring budget, funded by cookouts and an annual rodeo that was canceled this year amid coronavirus concerns. Now, the crew needs new tires for their truck, boots that can handle structure fires and new fire suits.

“Ours, they are pretty outdated,” he said. “We are doing the best we can.”

Containment on the sprawling complex — burning in and around the Mendocino, Shasta-Trinity and Six Rivers national forests — now sits at 39%, but its sheer size poses a massive challenge for fire crews.

As of Sunday, officials said the fire’s perimeter was more than 568 miles. By comparison, San Diego is about 500 miles from Sacramento by car.

The enormity of that fire is one of a number of alarming data points wrought by the 2020 fire season. So far this year, there have been over 8,000 wildfires that have burned more than 3.6 million collective acres statewide, the most in any year on record, according to Cal Fire. Over 18,200 firefighters are currently battling blazes across the state.

There have been 26 confirmed deaths in the historic firestorm, including three firefighters, and more than 6,600 structures have been destroyed.