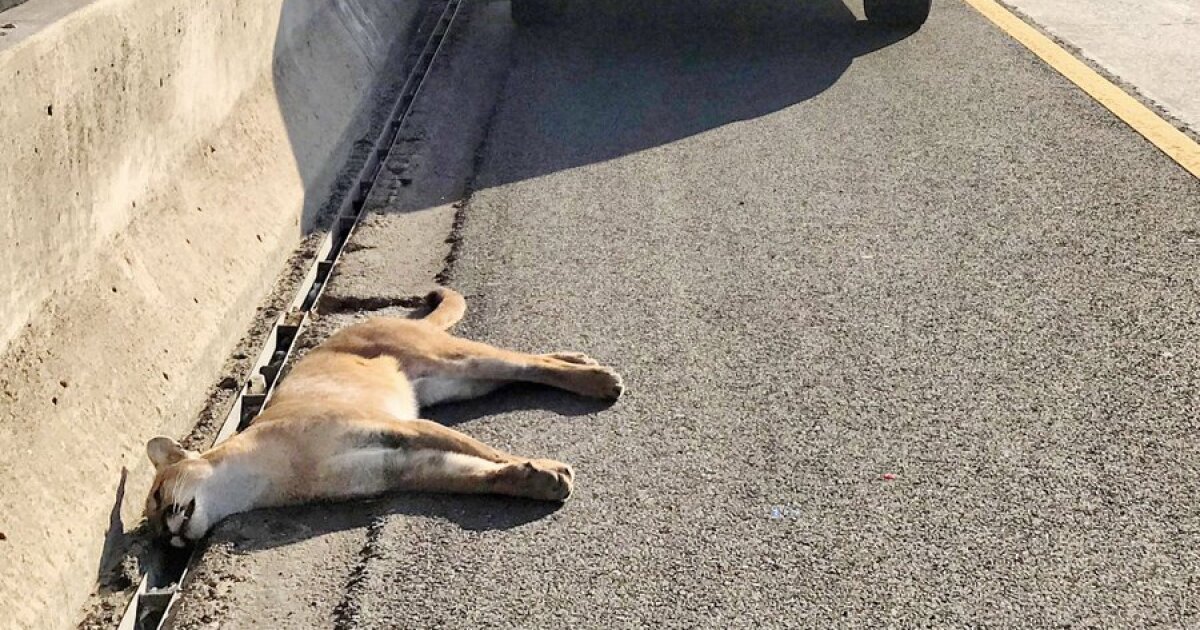 A mountain lion was found dead along the 101 Freeway in Calabasas this week, the latest big cat to die while trying to cross a Southern California roadway.

Officers from the California Highway Patrol’s West Valley office discovered the lion Wednesday morning and said it “appeared to have been struck and killed by a vehicle.”

“It’s always unfortunate when this happens,” officials wrote on Twitter.

Such incidents are not uncommon. Since National Park Service biologists began researching cougars in the Santa Monica Mountains in 2002, motorists had struck and killed 17 of them in the study area, according to a federal report from June 2019.

And the death toll has grown since then. A 4-year-old male mountain lion known as P-61 was struck and killed on the 405 Freeway in the Sepulveda Pass a year ago.

It’s not yet known whether the mountain lion found Wednesday was part of the federal study. Officials with the Santa Monica Mountains National Recreation Area said a full necropsy was planned.

Along with the obvious dangers posed by passing cars, freeways also serve as near-impassable barriers that prevent mountain lions from roaming freely — effectively siloing them into isolated genetic pools.

The consequences of that low genetic diversity are becoming apparent. Earlier this month, researchers said they had discovered deformities linked to inbreeding among cougars in the Santa Monica Mountains.

One remedy that’s being pursued is a wildlife overpass that would cross the 101 Freeway in Agoura Hills. Such a bridge, conservationists say, would not just let lions avoid traffic, but by allowing more intermingling, also help diversify the gene pool.

The crossing would “help prevent these needless deaths and the extinction of this threatened population of mountain lions,” according to Beth Pratt, California regional executive director for the National Wildlife Federation.

The federation is leading a fundraising campaign for the bridge that has already raised about $15.4 million of its $85-million goal. Officials said they hope to break ground next year.

“It’s important that we all understand the reality of what is at stake for California’s mountain lions and how the same roads and highways that connect us with the wider world are deadly barriers to these cats,” Pratt said in a statement Wednesday.

“This magnificent mountain lion deserved better than this brutal death,” which occurred only miles from the site of the proposed crossing at Liberty Canyon.

However, conservationists say that a highway crossing — while vital — won’t be a cure-all for the beleaguered cougars. J.P. Rose, an attorney with the Center for Biological Diversity, said land-use planning is also a culprit that needs to be addressed.

Freeways and development are far from the only threat cougars face in Southern California.

Wildfires can destroy their already limited habitat, and they also periodically fall prey to rat poison.

This year hasn’t been all bad news on the big cat front, however. There’s also been a baby boom — with 13 kittens born to five mountain lion mothers between May and August, according to the Santa Monica Mountains National Recreation Area.