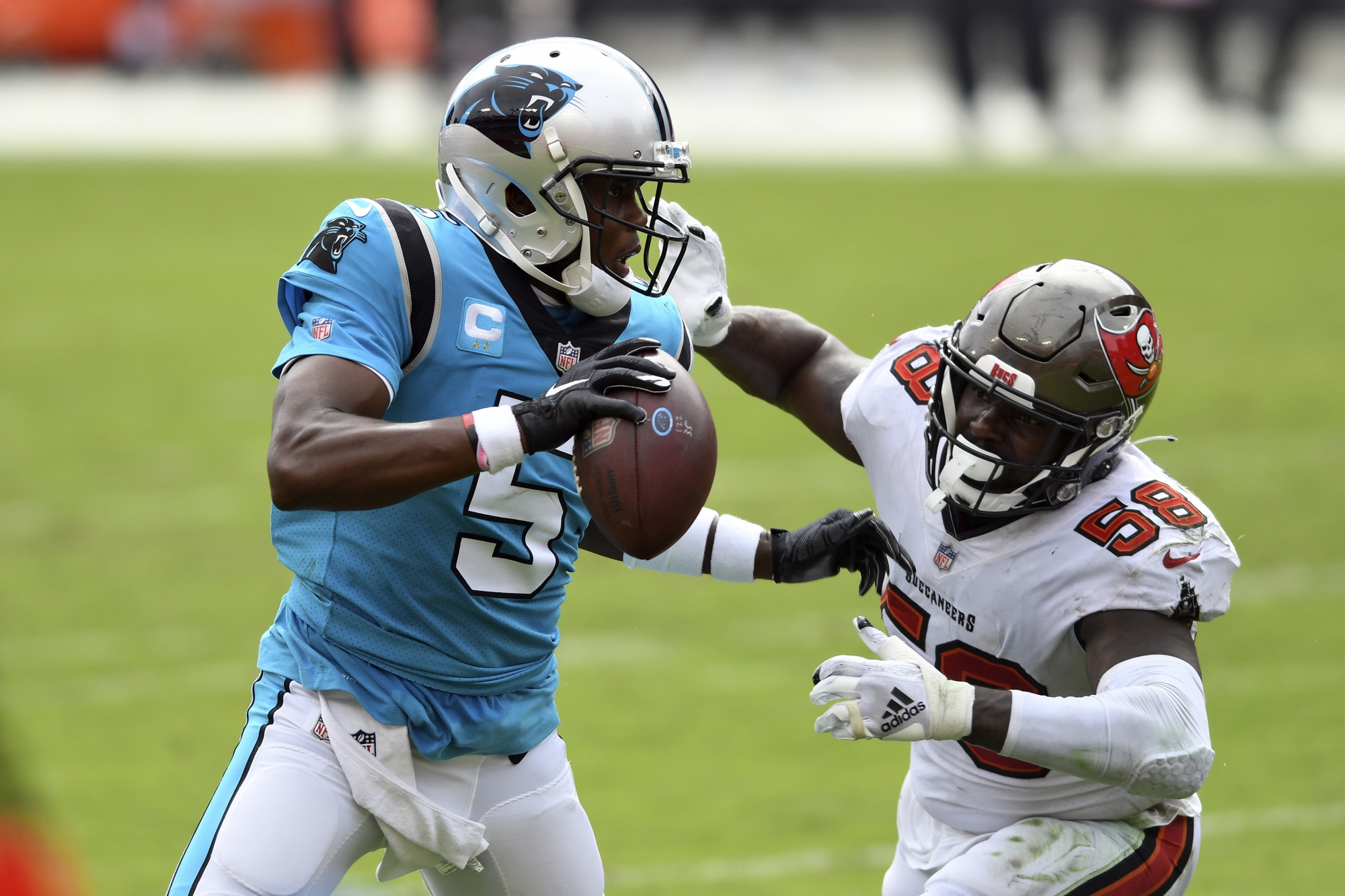 DENVER (AP) — After watching Von Miller and Bradley Chubb team up for 24½ sacks in Denver in 2018, Shaq Barrett didn’t want to be a backup anymore and took his talents to Tampa.

When he returns with the Buccaneers (1-1) Sunday to face the Broncos (0-2) he’ll saunter into Empower Field as the NFL’s defending sacks champion.

And although he’s still searching for his first sack of 2020, he’ll bring with him zero regrets.

“I just want to show them that they did have a chance to have me and they let me go,” Barrett said. “But I am happy with my situation down here. I love it.”

It was a good move for Barrett before he’d ever played a down for the Bucs.

His one-year, $5 million deal last season represented some $53,000 more than he’d earned in Denver, where he spent his rookie year on the practice squad after going undrafted out of Colorado State before a four-year run backing up the likes of Miller, Chubb, DeMarcus Ware and Shane Ray.

He parlayed that into the $15.88 million franchise tag he’s playing on this season after a monster year in which he collected an NFL-best 19½ sacks, forced six fumbles and earned his first Pro Bowl nod.

Had he stayed, Barrett would be in his second season as a starter in Denver.

“No, I most definitely don’t think about that,” Barrett said. “That’s the only reason why they had me was like if one of them did get hurt, they knew they had a secure, comfortable backup who could come in, make some plays and be a somewhat starting-caliber player.

“But that’s not the role that I wanted” anymore, Barrett said. “It worked initially, but as I got older, I did want to see if I could be a full-time starter in the league and that just wasn’t an option there or a role I could possibly have.”

Still, he’s thankful for his time in Denver.

“All my time there was a blessing,” Barrett said. “I wouldn’t be the player I am now without” it.

Other subplots Sunday when Tom Brady goes for just his fifth win in a dozen trips to Denver and the Buccaneers seek their first win over the Broncos since 1999:

Brady has thrown interceptions in his past four starts, three of them pick-6s. But Broncos coach Vic Fangio sees no signs the 43-year-old QB is showing his age.

“He doesn’t look any different to me,” Fangio said. “He’s still got really good arm strength and strong football intelligence in recognizing things. I don’t see a major difference other than the new uniform that he’s wearing.”

“Tom Brady being one of the G.O.A.T.s, you never want to sleep on a guy like that even if he isn’t looking the same as he has in the past,” Callahan said. “We’re still going to approach the game like he’s The Man. We don’t want to get caught slipping.”

With Drew Lock (shoulder) sidelined for the second straight season, Jeff Driskel gets his first start for Denver and is seeking his second career win, which is 248 fewer than Brady.

“As long as I can remember, I’ve watched him play,” said Driskel, who is 16 years younger than Brady. “He’s been playing for 20 years or whatever it’s been. He’s been a constant in this league. He’s been one of the best, if not the best for a majority of those years.”

There’s no denying Rob Gronkowski is off to a slow start in Tampa Bay with just two catches for 11 yards. He was held without a catch last week for just the fifth time in his 117-game career.

“He doesn’t look any less daunting,” Fangio insisted. “In fact, he looks like he’s in pretty good shape. He’s running better than he was late in the final season of his career with New England. I think he’s healthy and ready to go. … He hasn’t gotten his yet, but I’m sure by the end of the season, he’s going to have some good numbers.”

Maybe even by game’s end Sunday. In six career games against the Broncos, Gronkowski has 34 receptions for 445 yards and three TDs.

Leonard Fournette, who signed with the Bucs this month, rumbled for 225 yards on 29 carries in the Jaguars’ 26-24 win at Denver a year ago.

After that game, Fangio shuffled his defense, moving Mike Purcell to nose tackle and switching Shelby Harris to end while inserting linebacker Alexander Johnson into the lineup.

“Hopefully, we’ll have a better day against him than we did last year,” Fangio said.