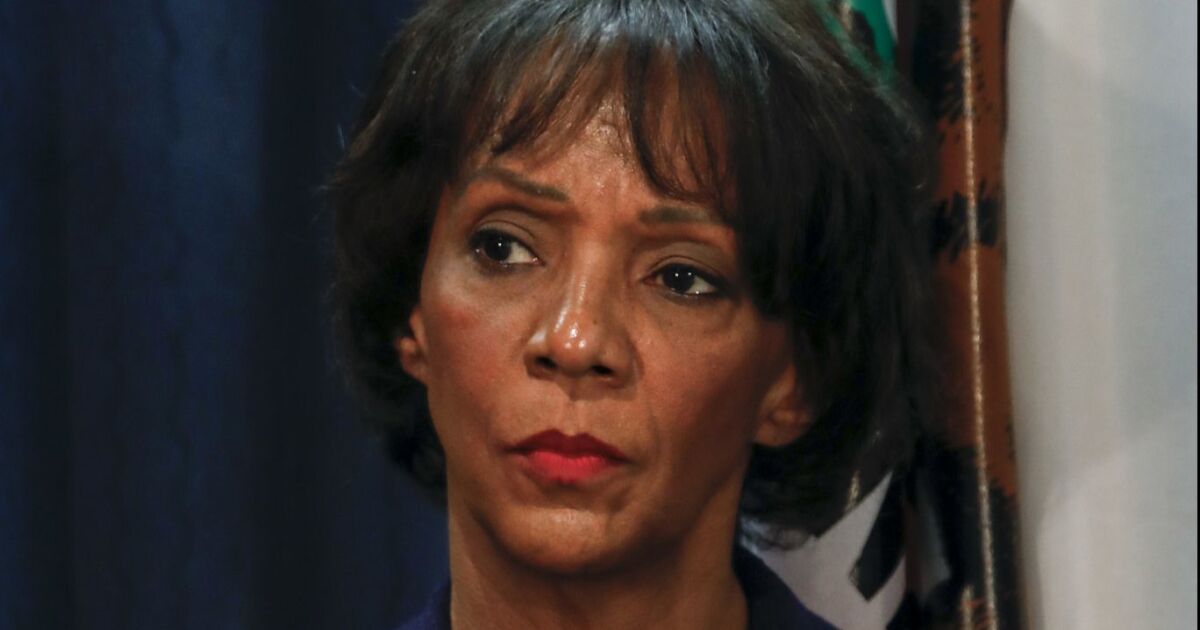 Los Angeles County Dist. Atty. Jackie Lacey has recused herself from investigating a fatal shooting involving the daughter of a powerful figure in the L.A. police union, which has helped to raise millions for her reelection campaign.

Los Angeles Police Officer Toni McBride, whose father is a director with the Los Angeles Police Protective League, shot and killed 38-year-old Daniel Hernandez near downtown L.A. in April. Although the case did not immediately prompt widespread outrage, Hernandez’s family began joining protests downtown and outside Lacey’s home this summer after the police killings of George Floyd and Breonna Taylor sparked national backlash against law enforcement use of force.

Critics of Lacey have questioned her office’s ability to judge the case fairly. The officer’s father, Jamie McBride, is one of the most visible and controversial figures in the protective league, which has contributed a significant amount of funding to Lacey’s November reelection bid through outside committees.

Greg Risling, a spokesman for the district attorney’s office, said Lacey made the decision to recuse in late July, due to the LAPPL’s political fundraising. The California attorney general’s office agreed to take over the case on Aug. 4, Risling said.

Risling did not immediately respond to questions about why the office did not publicly disclose Lacey’s decision. The Los Angeles City Council, seemingly unaware of the recusal, passed a motion calling for an outside review of the shooting on Aug. 19, more than two weeks after the move had already been made.

The office has not referred a fatal-use-of-force case to the attorney general’s office during Lacey’s tenure. Lacey’s decision to recuse was first reported by Los Angeles Magazine on Wednesday.

All told, law enforcement unions across California have pumped at least $3.5 million into Lacey’s reelection bid, records show. At least $1.2 million of that money was collected by an independent committee organized by the LAPPL.

According to the LAPD account, Toni McBride responded to the scene of a motor vehicle accident near San Pedro and 32nd streets on April 22. Witnesses reported the crash had been caused by a driver who was still in his truck and appeared to be cutting himself. Video shows Hernandez approaching McBride holding what the department has said is a razor-edged box cutter and refusing commands to drop the weapon. McBride also asked her partner about using a less-lethal device to subdue Hernandez before firing the fatal shots.

Some policing experts said the officer’s initial actions were justified. Others, however, questioned McBride’s decision to fire additional shots after Hernandez was on the ground.

Calls to attorneys representing both the McBride and Hernandez families were not immediately returned Thursday. Larry Hanna, McBride’s attorney, previously said she reacted based on how she was trained.

“She had fear at all times and was shooting at somebody she felt was coming at her and … toward the other citizens who were out there,” Hanna told The Times earlier this year.

The issue of campaign contributions from police unions has become increasingly relevant as the November contest continues to be framed by a national reckoning over law enforcement use of force. Lacey’s opponent, former San Francisco Dist. Atty. George Gascón, has joined a push to bar police unions from contributing in local district attorney races, arguing the donations raise ethical questions in prosecutions of law enforcement officials.

Lacey has rejected such calls, while criticizing Gascón’s campaign for raking in millions from Silicon Valley mega donors.

“If Dist. Atty. Lacey believes that an outside agency is needed to investigate any case, she is right in seeking that review,” he said. “We are hopeful that the attorney general conducts his investigation in a fair and objective manner that is driven by facts and evidence and not emotions.”