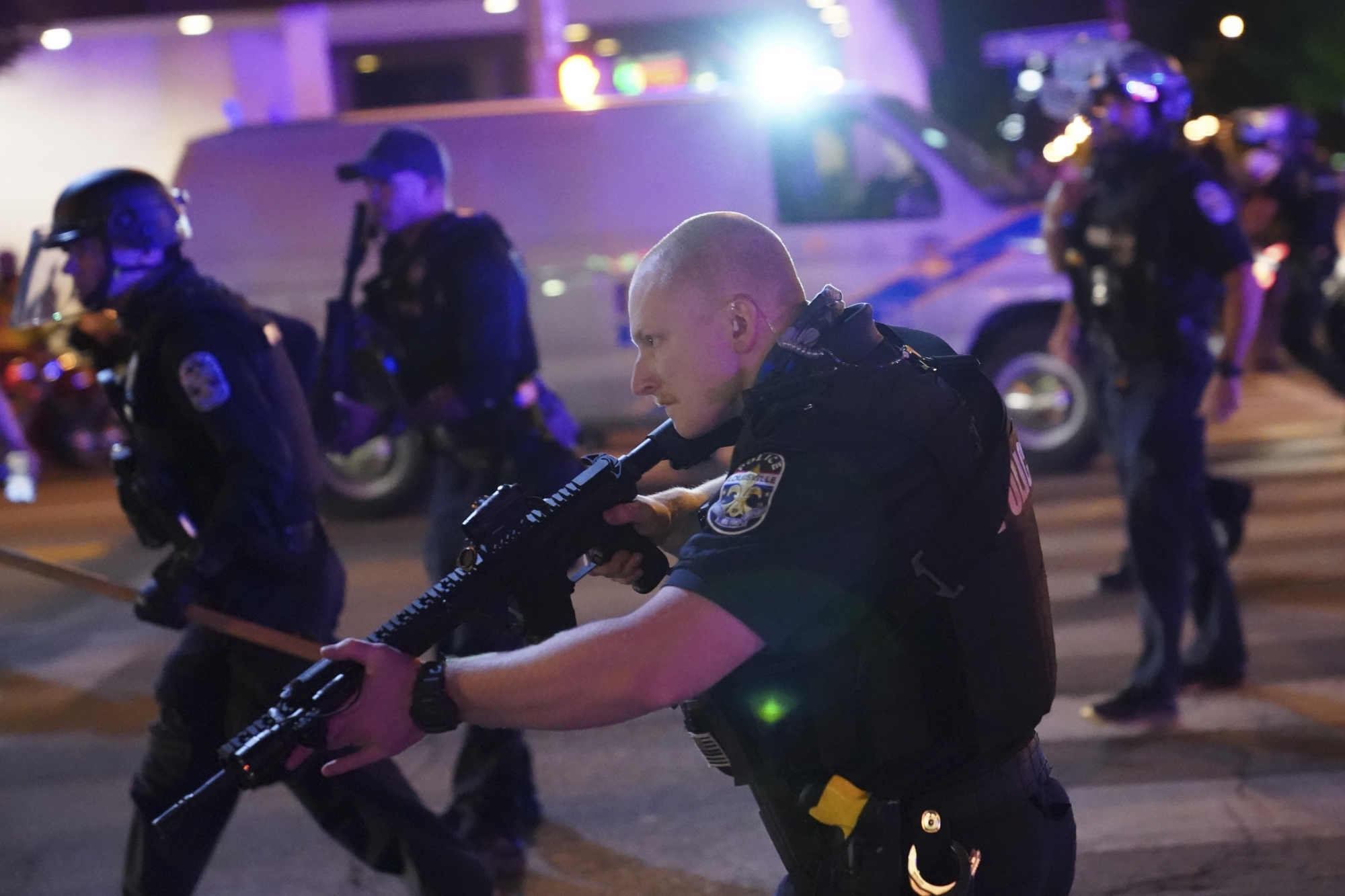 The family of Breonna Taylor plans to hold a news conference Friday morning along with civil rights attorney Ben Crump in Louisville.

A news release says they’ll address a grand jury’s decision Wednesday to not indict any of the police officers for Taylor’s death at the news conference scheduled for 10:30 a.m. EDT.

Cities around the country have seen protesters take to the streets following the grand jury decision.

Democratic U.S. Senate candidate Amy McGrath says there is a need to “tackle the systemic racism” in the U.S.

McGrath is challenging U.S. Senate Majority Leader Mitch McConnell in Kentucky’s November election. She met in downtown Louisville on Thursday with some of the protesters who have taken to the streets to seek justice for Breonna Taylor.

Demonstrators turned out Wednesday in Louisville and throughout the country to express their disappointment that police officers weren’t criminally charged in her fatal shooting during a botched drug raid in March.

McGrath called for Kentucky Attorney General Daniel Cameron to release details about the evidence presented to the grand jury in the Taylor case. She faced pushback from some protesters. Rose Henderson says McGrath’s appearance was “all about politics and cameras.”

HERE’S WHAT YOU NEED TO KNOW ABOUT THE BREONNA TAYLOR CASE:

A Kentucky grand jury has brought no charges against Louisville police for the killing of Breonna Taylor during a drug raid gone wrong. Prosecutors said Wednesday that two officers who fired their weapons at the Black woman were justified in using force to protect themselves. Instead, the only charges brought by the grand jury were three counts of wanton endangerment against fired Officer Brett Hankison for shooting into a home next to Taylor’s that had people inside. Taylor was shot multiple times by officers who burst into her home on March 13 during a narcotics investigation.

— A timeline of events related to the death of Breonna Taylor

White House press secretary Kayleigh McEnany says she’s not aware of any conversation between President Donald Trump and the family of Breonna Taylor but that their hearts go out to her family.

Asked what the president’s message is to Taylor’s family, McEnany said what happened is “a horrible tragedy” and that their hearts are also with the two police officers who were shot Wednesday night during protests in Louisville.

Cities around the country saw protesters take to the streets following a Kentucky grand jury’s decision to not indict officers in Taylor’s fatal shooting.

A newspaper publisher says two of the paper’s reporters were arrested during protests in Louisville after a grand jury’s decision to not indict officers in the fatal shooting of Breonna Taylor.

An arrest citation says video has been recovered that shows 26-year-old Larynzo Johnson shooting at two police officers who were wounded during protests in Louisville over a grand jury’s decision in the fatal shooting of Breonna Taylor.

Johnson has been charged with two counts of assault on a police officer and multiple charges of wanton endangerment of police officers.

Interim Police Chief Robert Schroeder said the two officers are “doing well and will survive their injuries.” Maj. Aubrey Gregory was shot in the hip and was treated and released from the hospital. Officer Robinson Desrouches was shot in the abdomen and underwent surgery.

The Kentucky Republican on Thursday called on the state’s governor and Louisville’s mayor, both Democrats, to take “every necessary step” to secure peace in the state’s largest city.

Two Louisville police officers were shot Wednesday night during protests. McConnell called the shootings acts of “despicable cowardice that must be met with the full force of the law.”

McConnell is running for reelection this year and also says he has full confidence in Kentucky Attorney General Daniel Cameron’s “painstaking pursuit of facts and justice” in the Taylor case.

Officers Myles Cosgrove and Jonathan Mattingly were among the officers who burst into Taylor’s apartment on March 13 and Schroeder said Thursday morning they have not returned to active duty.

The third officer, Brett Hankison, was fired after the shooting and was charged Wednesday for shooting into neighboring apartments.

Louisville’s police chief says a man has been charged in the shooting of two officers during protests over a grand jury’s decision in the fatal shooting of Breonna Taylor.

Louisville Mayor Greg Fischer says one officer was treated and released with a leg wound. Another officer was shot in the abdomen and the mayor says he’s doing well after surgery.

Officials also say a curfew remains in effect for the next two nights after fires and and violence against police officers during protests.

Louisville Mayor Greg Fischer says two officers shot during protests over a grand jury’s decision to not indict officers in the fatal shooting of Breonna Taylor are doing well.

Fischer says one officer was was treated and released with a leg wound. Another officer was shot in the abdomen and the mayor says he’s doing well after surgery.

Cities around the country saw protesters take to the streets following a Kentucky grand jury’s decision to not indict officers in the fatal shooting of Breonna Taylor.

Police in Seattle made 13 arrests as authorities said people smashed windows and spray-painted buildings. Seattle police say multiple officers were injured Wednesday night and one was hit in the head with a baseball bat, cracking his helmet.

In Minnesota, several hundred demonstrators rallied late Wednesday at the state Capitol in St. Paul before marching onto an interstate. Protesters denounced what they said was a criminal justice system that has failed to hold the officers accountable for Taylor’s death.

In Denver, police say a man was detained Wednesday night after driving his car through a group of people protesting. Police said no injuries were reported. The Denver Post reported that at least one person was hit near the state Capitol but she said she wasn’t badly hurt.

Police in Portland say protesters hurled Molotov cocktails at officers in Oregon’s largest city during a demonstration over a Kentucky grand jury’s decision to not indict officers in the fatal shooting of Breonna Taylor.

In a statement, police say the protesters Wednesday night also threw rocks that shattered windows at a law enforcement precinct station. One officer was hit on the foot with a Molotov cocktail but a fire department medic managed to extinguish the flames.

Portland has been gripped by protests for four months since the police killing of George Floyd in Minneapolis. There were no immediate reports of injuries or arrests during the clashes Wednesday night.

Crews in yellow jackets are cleaning up around downtown Louisville on Thursday morning after protesters filled the streets the night before following a grand jury’s decision to not indict officers in the fatal shooting of Breonna Taylor.

Video showed crews sweeping up garbage and putting it into garbage trucks.

Police say 127 people were arrested. A police statement says some were arrested after damaging businesses and more were detained after jumping on city vehicles being used as barricades. Later, protesters who refused orders to disperse were arrested for curfew and unlawful assembly violations. Police also say some businesses were looted.

Police say they’ve made 127 arrests in Louisville, Kentucky, after protests over the grand jury’s decision to not indict officers in the fatal shooting of Breonna Taylor.

A police statement early Thursday says some were arrested after damaging businesses and more were detained after jumping on city vehicles being used as barricades. Later, protesters who refused orders to disperse were arrested for curfew and unlawful assembly violations.

Police also said some businesses were looted early Thursday including two City Gear stores and a pawn shop. No further information was released about a suspect accused of shooting two officers while demonstrations were ongoing.

Police said one of them underwent surgery and both are expected to survive.

In downtown Portland, Oregon, the site of months of demonstrations against police brutality, several hundred people held a rally in the rain Wednesday night in front of the Multnomah County Justice Center, the Oregonian/Oregonlive.com reported.

A drum line played in rhythm with chants of “Whose life mattered? Breonna Taylor!”

Several Black women addressed the crowd and encouraged people to vote and continue pressing for change, the newspaper reported.

Police say they have deployed chemical agents on Atlanta protesters demonstrating against a grand jury’s decision not to indict police officers for the fatal shooting of Breonna Taylor.

Georgia State Patrol Spokesperson Franka Young has told The Associated Press the chemical agents were fired after “some unruly protesters” attempted to climb on top of a SWAT vehicle that was stationed in the city.

“They were given orders to get off of the vehicle and when they ignored the orders, the SWAT team was forced to utilize less lethal gas to deter them,” Young said. Some protesters were also arrested after refusing orders to disperse from roads and to walk on sidewalks, Young said. It is not clear how many people were arrested. Young said many protesters had followed police orders.