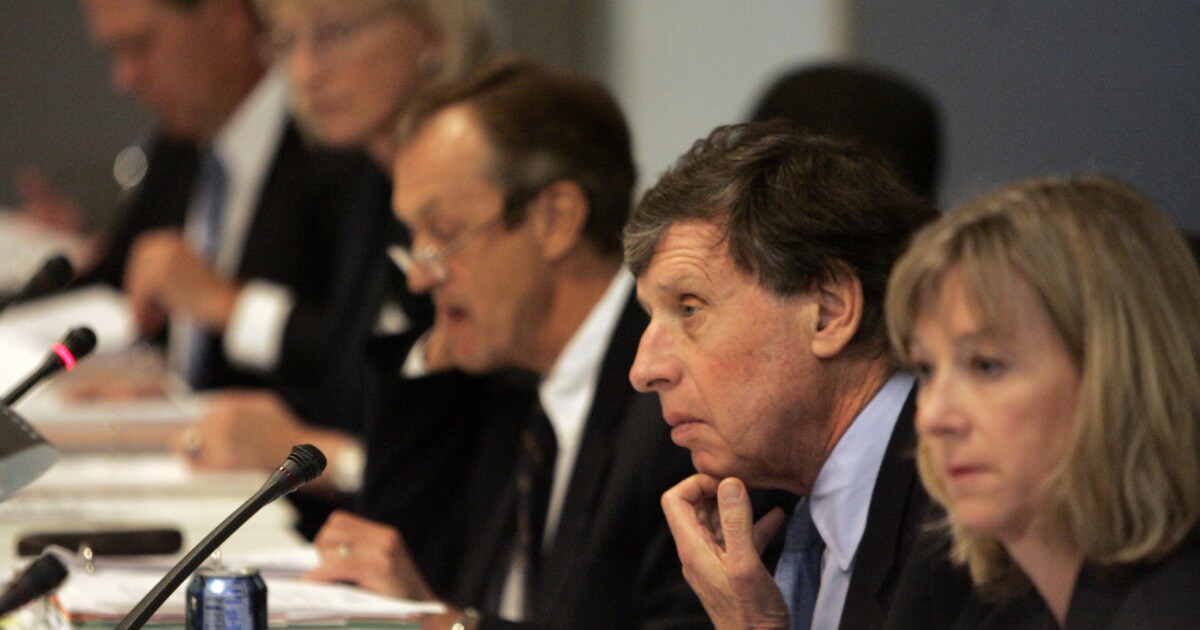 University of California Regent Richard Blum, a wealthy San Francisco financier, wrote an “inappropriate letter of support” to help a student get into UC Berkeley despite the applicant’s uncompetitive ratings by university staff and an initial denial of admission, according to the California state auditor’s office.

The case was identified this week in an 82-page state audit on UC’s admission process, which found that four campuses had admitted at least 64 students between academic years 2013-14 and 2018-19 using inappropriate factors to select them, such as connections to donors, staff or alumni.

The audit report referred to one “particularly problematic” case involving an unnamed UC regent. The California State Auditor’s office has identified that person to The Times as Blum, the husband of Sen. Dianne Feinstein (D-Calif.) and a Berkeley alumnus who has given his alma mater millions of dollars over the years.

Blum, who has served as a regent since 2002, did not immediately respond to a request for comment.

The audit gave no details about when the case occurred. UC Berkeley has no details beyond what the audit contains and “will need more information to determine what occurred before we can weigh in on the matter,” campus spokeswoman Janet Gilmore said Thursday.

Board of Regents Chairman John A. Pérez said UC officials have “limited details” about the case but are reviewing the information to determine whether the alleged conduct violates university policies and whether an additional UC review or investigation is warranted.

“The UC Board of Regents takes these matters very seriously and any violations will be promptly and appropriately addressed,” Pérez said in a statement. “Once the Board determines and carefully evaluates the facts of the case, we will comment on the outcome and will further review if any changes in policy are called for.”

The state audit found that UC Berkeley, UCLA, UC San Diego and UC Santa Barbara had admitted at least 64 applicants during the six-year time period in question because of connections to donors, campus staff or alumni. In most of the cases, the audit found, the admitted students had been rated not competitive for admission. The majority of them were white and at least half had annual family incomes of $150,000 or more.

UC Berkeley was the worst offender, the audit said, with 55 cases of inappropriate admissions. Among them, 14 cases involved students who were denied admission through the regular process and were offered a spot on the waitlist. Blum’s letter came in support of one of those waitlisted students, the audit said.

But that student, like the 13 others on the waitlist, had received “uncompetitive scores from readers that gave them poor chances of being admitted,” the audit said.

Blum wrote a letter of advocacy about the student to the UC Berkeley chancellor, which was forwarded to the development office responsible for handling fundraising and relations with donors. Blum has been a longtime supporter of Berkeley , donating $15 million in 2006 to launch the Blum Center for Developing Economies to address global poverty and subsequent contributions to expand that work.

The development office then forwarded the letter to the admissions office, the audit said. The two offices conferred on who should be admitted from the waitlist. Blum’s favored applicant had only a 26% chance of acceptance based on ratings by application readers, the audit said, but won admission.

The audit report noted that UC policies allow regents to submit letters of recommendation, when appropriate, during the regular admissions process — but that Blum’s letter came outside those bounds after the student was denied initial acceptance and placed on the waitlist.

“Given the low likelihood of this applicant’s admission and the prominent and influential role that Regents have within the university, we conclude that the decision to admit this applicant was likely influenced by the Regent’s advocacy,” the audit said.

It is not uncommon for UC campus chancellors to receive letters or calls of support from regents and donors about favored applicants. George Blumenthal, who served as UC Santa Cruz chancellor for 13 years before stepping down last year, said he would typically receive several such appeals a year. He said he would respond with a form letter telling them he could not do anything to affect the admissions process and forward the information to admissions officers, making it clear they were not to let it influence their decisions.

Allowing benefactors of power and privilege to sway admission decisions would be unethical, he said. “We all know it’s a big no no,” Blumenthal said.

He added that UC campuses are expected to use a comprehensive review process that evaluates all applicants fairly based on 14 criteria — such as grades, high school coursework, leadership and special talents.

“Knowing someone powerful is not one of the 14 criteria,” Blumenthal said.